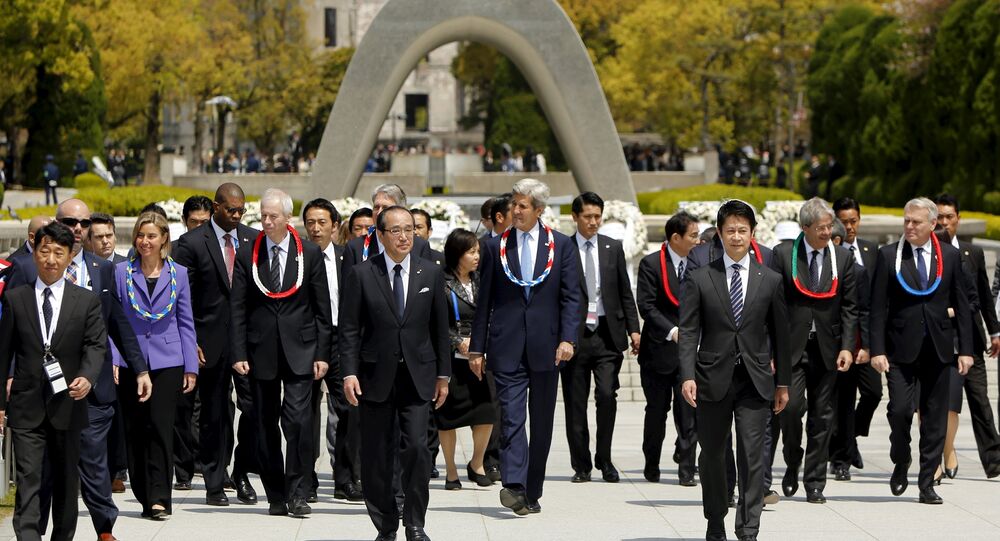 MOSCOW (Sputnik) – US President Barack Obama arrived last and Abe walked with him across the Ujibashi bridge, which symbolizes leaving the temporal world and entering the spiritual one.

Abe was greeted by Ise Jingu’s head priest at the entrance to the shrine, which is located in the city of Ise in Japan’s Mie Prefecture.

The leaders of the G7 countries – Canada, France, Germany, Italy, Japan, the United Kingdom and the United States, as well as representatives of the European Union, will discuss the global economy, climate, foreign policy issues, trade, terrorism, migration and the situation in Ukraine at the summit in Ise-Shima, which will run through Friday.

Regional issues, particularly the territorial disputes in the South China Sea, will also be on the agenda of the summit. According to European Council President Donald Tusk, the prospects of the upcoming referendum on the United Kingdom's EU membership will also be discussed.

The Guardian reports that Ise-Shima is on lockdown and about 23,000 police officers have been deployed in areas near the G7 summit venue.

Putin, Abe Will Synchronize Watches on Syrian Settlement Ahead of G7 Summit

Japan, France Back Dialogue With Russia Ahead of G7 Meeting

No Russia, No Clout: Three Reasons Why Germany Wants Moscow Back in G7

Obama to Visit Hiroshima After G7 Summit in Japan in May

Russia-G7: Too Early to Reunite