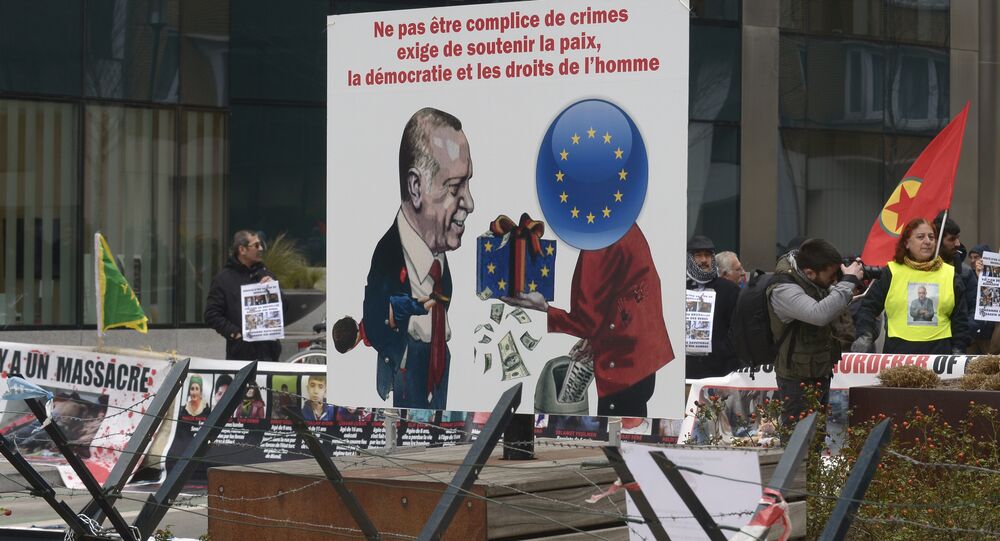 The World Humanitarian Summit wrapped up in Turkey’s Istanbul on Tuesday, with Recep Tayyip Erdogan threatening the EU that Turkey would scupper the deal if Ankara was not granted its key demand of visa-free travel within the Union; Angela Merkel, in turn, warned that the demand is unlikely to be met.

Recep Tayyip Erdogan has warned the EU that the Turkish parliament would block any laws related to the Turkey-EU deal on migrants, if Ankara was not granted its key demand of visa-free travel within the European Union.

“If that [visa free travel] is not what will happen… no decision and no law in the framework of the readmission agreement will come out of the parliament of the Turkish Republic,” Erdogan said at the close of the World Humanitarian Summit in Istanbul on Tuesday.

“Our foreign ministry, our EU affairs ministry will have discussions with the Europeans. If there is a result then great. If not, then I'm sorry,” the Turkish president added.

The comments come in the follow up to German Chancellor’s remarks that the target day for the completion of the visa-free procedures is unlikely to be met.

Following her talks with Erdogan, Angela Merkel said on Monday that Turkey still needs to fulfill all of the conditions set by the European Union before its citizens can get visa-free travel by July 1st.

However there are still disputes between the EU and Ankara over the 72 requirements laid out by the Union that Turkey needs to meet in order to earn visa-free access to the Schengen area by the end of June.

The 72 requirements listed in the Visa Liberalization Roadmap apply across the areas of document security, migration management, public order and security, fundamental rights and readmission of irregular migrants.

© REUTERS / Ozan Kose/Pool
Critics Slam EU-Turkey Deal Under Spotlight at Humanitarian Summit
One of the sticking points relates to Turkey's broad anti-terrorism laws. Changes to the legislation were among the conditions set by the EU under the agreement.

The EU wants Ankara to narrow its definition of terror to stop prosecuting academics and journalists for publishing “terror propaganda.”

Another point of discord is the sudden resignation this month of former Prime Minister Ahmet Davutoglu, who was widely seen in Brussels as a more amenable figure than the combative Erdogan.

Some of the EU member states have also sounded alarm over issues including a law to strip MPs of immunity, which critics have said was a step meant to sideline pro-Kurdish politicians, and Erdogan's drive for a presidential system in the country.

Merkel said that she voiced her concern to Erdogan over “the decision to withdraw immunity from every fourth lawmaker in the Turkish parliament,” which she said is something “that causes deep concern.”

“The questions I had in this connection have not been fully cleared up,” Merkel said following the talks with her Turkish counterpart.

“Turkey is supposed to fulfil criteria? What criteria are these I ask you?” Erdogan raged in return on Tuesday.

“[The EU] should not keep trying to impose criteria on us. This is Turkey," he added.

Erdogan furthermore complained that certain Latin American countries whose citizens are exempt from visa requirements to travel to the Schengen zone, did not have to fulfill the same criteria as Turkey.

He also wondered why Turkey, which is an EU candidate country and part of the bloc’s customs union, would have to fulfill 72 requirements.

In addition, the Turkish president also said that the Union was not delivering on its promise to deliver aid for Syrian refugees.

© AP Photo / Luis Hidalgo
With a Little Help From His Friends: Turkey's Erdogan Looks to Seize Dictatorial Control
The EU had pledged up to 6 billion euros ($6.7bln) as part of the deal.

“When you look at what has been done so far, we see that they are not keeping the promises they made,” said the Turkish leader.

Under the EU-Turkey agreement, migrants who have arrived illegally in Greece since March 20 are to be sent back to Turkey if they do not apply for asylum or if their claim is rejected.

For each Syrian migrant returned to Turkey, the EU is to take in another Syrian who has made a legitimate request.

Angela Merkel’s concerns were earlier echoed by European Parliament President Martin Schulz, who also reiterated that there will be no visa liberalization for Turks in Europe until Erdogan meets all the conditions set.

“We see that Turkey under Erdogan is on the way to a one man state,” Schulz told the Cologne daily, Koelner Stadt-Anzeiger, referring to the lifting of parliamentary immunity for opposition MPs.

He also expressed concerns over the change in the prime ministership, after Ahmet Davutoglu stepped aside and was replaced by Erdogan’s ally Binali Yıldırım.

“We fixed criteria for visa liberalization, there are 72 of them and number 65 says that the Turkish government must review the anti-terror law,” Juncker said earlier at a conference on Europe at the German Foreign Ministry voicing concerns over Turkey’s anti-terror laws.

Meanwhile, Mikhail Neizhmakov, head of the Center for International Politics at the Institute of Globalization and Social Movements, told Radio Sputnik that Merkel’s comments are the result of serious pressure the Chancellor is experiencing at home.

“There is a picture portrayed in the German and European media that Merkel is trying to please and flannel Erdogan,” he said.

“Therefore she needs at least to display a readiness to stand up to Erdogan, to show that she does not blindly and silently follow Erdogan and Ankara, but is ready to show who the master is here,” he said.

© REUTERS / Axel Schmidt
Merkel 'Forced to Deal With Despotic Leader' to Curb Migrant Flow to Europe
The political analyst added that the Chancellor’s rhetoric could simply be a performance or part of a bargain between Ankara and leading European countries. Merkel will then convey that it won’t be an easy walk for Ankara, and Erdogan also needs to make some sort of concessions.

Turkey-EU Deal is a 'Bargaining of Merchants, Where Each is Pursuing His Own Profit'

Meanwhile, another political analyst and journalist Yuri Svetlov reminded Radio Sputnik that almost a half of those polled in France, Germany and United Kingdom (49%) think Turkey will never join the European Union or that it will take more than a decade to do so, according to a Sputnik.Polls survey.

However, he added, it matters little.

“If the leadership of the leading EU countries need Turkey in the EU for some political reason, they will accept it into the Union,” he said, adding that Ankara has been trying to get access into the bloc for almost 40 years already without any foreseeable progress.

“This is not a conversation among partners who are interested in finding a common solution to a common task. It is a bargaining of merchants, where each is pursuing his own profit. And the bargaining will go on,” he said.