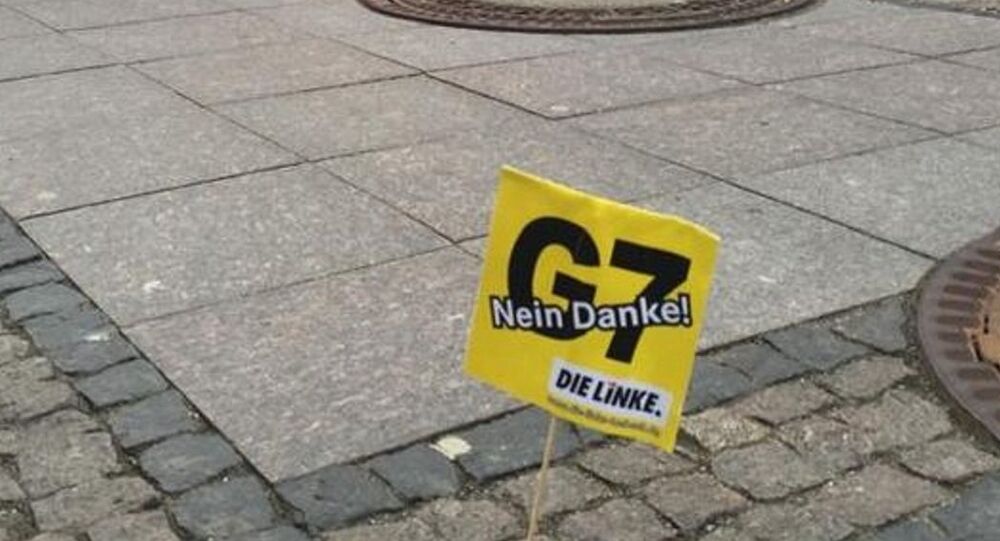 'Anomaly, Affront, Obstacle': Why G7 Has Outlived Itself

The world has changed dramatically and the Group of Seven (G7) does not meet its needs, Professor Jean-Pierre Lehmann writes, labeling the bloc as an "anomaly" and "an obstacle to dynamic and equitable global governance in the 21st century."

The 42nd G7 summit is due to start Thursday in Ise-Shima, Mie Prefecture, Japan, bringing together the leaders of the US, Canada, France, Germany, Italy, Japan and the UK; however, voices continue to emerge saying that the bloc has outlived its purpose.

"The 42nd Summit of the G7… should be its last. In fact, it should have been dissolved a long time ago. The G7 is an atavistic anomaly that serves no useful purpose in global affairs; on the contrary, it perpetuates a strong Western bias thus undermining its legitimacy," Jean-Pierre Lehmann, Professor Emeritus at the International Institute for Management Development (IMD), Switzerland, writes in his latest article for Forbes.

© REUTERS / Michael Kappeler/Pool
It Takes Ten to Tango: ‘G7 Alone Can’t Influence World Events’
According to the academic, the bloc, created in the mid-1970s, accomplished its mission, and now that the world has undergone unprecedented changes, the G7 has "lost much of its raison d'être."

What does Lehmann mean?

"The West no longer dominated the planet as it had; there were new actors, new scripts and new challenges," the professor explains.

"This was partly, but ultimately unsatisfactorily, reflected in the establishment of the G20 Summit, first held in Washington in November 2008 with the onset of the great financial crisis," he adds.

The academic recalls that in 1998 the West made an attempt to expand the G7 by inviting the Russian Federation in the bloc and thereby making it the G8.

But 16 years later, in 2014, Russia was expelled from the G8 after Crimea's re-unification with the country. Lehmann highlights that the move demonstrated "the bias and hypocrisy of the West": back in 2003 the UK and the US unleashed the illegal invasion of Iraq but none of the G7 nations called Washington and London's membership into question.

"The main cause for the imperative of abolishing the G7 as well as the reason for its bias is that it has far too strong a Western presence in its membership. It simply makes no sense at this juncture of the 21st century that the Western European nations of France, Germany, Italy and the UK should each hold such exalted positions in global governance," the academic emphasizes.

© Sputnik / Sergei Guneyev
Beginning of the End: Japan’s Economic Cooperation Offer May Prompt EU to Lift Anti-Russian Sanctions
Remarkably, on the eve of the 41st G7 summit in June 2015, Larry Elliott, the Guardian's economics editor, wrote about the bloc much in the same vein.

"The G7 is a moribund institution and has been for the past decade. As an instrument of the internationalism it was set up to pursue, it is hopeless. It should be scrapped," Elliott stressed in his op-ed, adding that the internally divided bloc "has outlived its purpose."

"It is time for the annual get-together of the Group of Seven, this year in Ise-Shima, Japan. The only hope is that US President Barack Obama will make one final effort to leave a legacy, not to save the world (a faint dream) but to see that the G7 has some semblance of world vision before his own country tears apart the global architecture, with devastating consequences," Rafferty writes.

The G7 is in desperate need of a "global mindset," according to the former World Bank official. While the bloc members' finance ministers agree that the G7 should promote global growth, they still cannot reach a compromise on how it should be done and who should take the lead.

© Sputnik / Konstantin Salomatin
Japanese PM's Russia Visit a Breakthrough Out of G7's Anti-Russia Vector
On the other hand, the G7 does not represent real leadership in the increasingly globalizing world.

Rafferty insists that China and India should immediately join the bloc: "Their exclusion, the most populous countries in the world and two of its largest economies, makes a mockery of any claims to world leadership by the G7."

So, what kind of a bloc is needed?

According Lehmann, "a restructured and revitalized G20" may become an answer to global challenges.

"To achieve that end, the first step is to do some creative destruction not only on the structure of the G7, but on the spirit that it reflects, namely that Europeans are still endowed with automatic place in the global power seating," Lehmann underscores.

The world will continue to change and in this context "the G7 is an anomaly, an affront, and an obstacle to dynamic and equitable global governance in the 21st century," he concludes.

Before Canada joined the group in 1976, it was comprised of six countries: the three democratic countries which had seats in the UN Security Council (the United States, United Kingdom and France), and the democratic successor states to the three Axis powers that had capitulated in 1945 (Japan, West Germany and Italy).

At the time, these were also the world's largest industrial economies. However, currently, the EU represents the economic interests of four of these countries, and Brazil, Russia and India all contend to surpass several G7 nations in terms of GDP, according to the UN.

Putin, Abe Will Synchronize Watches on Syrian Settlement Ahead of G7 Summit