In recent months, Russia appears to have been the main issue on the Pentagon's agenda as US defense officials referred to the country as "aggressive" and "resurgent" while adding that its military capabilities have improved to an extent that the US armed forces are increasingly unprepared to respond to this supposed "threat."

In other words, they have painted the Russian military as being ten feet tall or aspiring to get there.

"The Russian military is not yet ten feet tall. But it is five foot ten inches and growing," defense analyst Dan Goure warned in a recent opinion piece, calling the trend "impressive." He also mentioned that senior US military officers are concerned with "the challenges posed by the improved capabilities of a rapidly modernizing Russian military."

© AP Photo / Mindaugas Kulbis
Forget Russia! This is the Real Threat to US and Its 'Gargantuan' Military Budget
"We need to be careful not paint them as 10 feet tall because they're not, and if we overstate, then we lose credibility," he noted. "But I've also said they may not be 10 feet tall but they're pretty close to 7 feet tall. Russia has proved itself to be a learning and adaptive military force."

In fact, the notion that Russia supposedly presents a threat to the US and its allies has become a constant refrain of US and NATO officials despite Moscow's repeated comments that the country does not pose a threat to anyone and in the absence of any compelling evidence to support this view.

Yet many, even in the Pentagon itself, remain unconvinced.

"The $600 billion-a-year military spend by Washington is roughly tenfold what Russia spends. And yet, inverting reality, Russia is presented as the threat," analyst Finian Cunningham observed. In his opinion, Washington has always been on a witch-hunt because the defense budget is the basis of the US economy and it would collapse should it be drastically reduced. 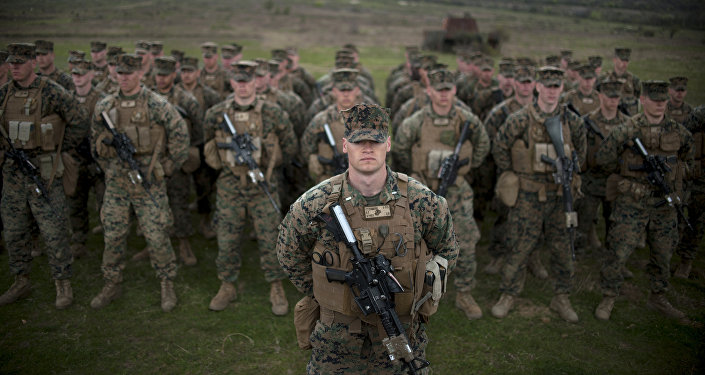 © AFP 2019 / NIKOLAY DOYCHINOV
Why US Officers Believe Pentagon Officials Take Them for a Fool
"With a 2015 military budget of $600 billion, Washington spends approximately ten times the amount on defense as does Moscow, and while Russian combat forces are modernizing, American military technology largely outclasses the Kremlin's," he noted.

The budget indeed seems to be at the heart of the Pentagon's strategy that has largely focused on demonizing Russia.

"This is the 'Chicken-Little, sky-is-falling' set in the Army," an unnamed senior Pentagon officer told Politico recently. "These guys want us to believe the Russians are 10 feet tall. There's a simpler explanation: The Army is looking for a purpose, and a bigger chunk of the budget."