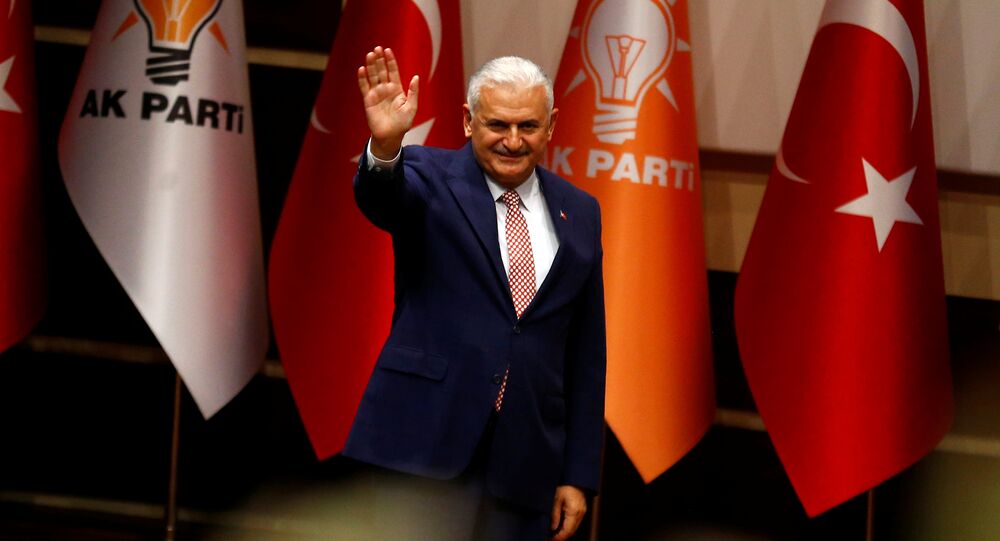 Transport Minister Binali Yildirim will soon become the new prime minister of Turkey. He was the only candidate nominated from the ruling Justice and Development Party (AKP). Particularly, Yildirim is known as being absolutely loyal to Erdogan.

© AP Photo / Eckehard Schulz
Tightening the Fist: Turkey Names Close Erdogan Ally as New Prime Minister
On May 19, AKP spokesperson Omer Celik announced that the party had nominated only one person for the post of the Turkish prime minister – Binali Yildirim.

He is a close ally to President Recep Tayyip Erdogan. Currently, Yildirim serves as Turkish Minister of Transport, Maritime and Communication.

He will be officially appointed prime minister during at an extraordinary congress of the AKP, on May 22.

"The AKP is a fighter party. It builds the future of the Turkish people by preserving its past. Under the rule of our leader, we’ll do our best to achieve the goals of the great Turkey," Yildirim commented on his upcoming appointment.

As prime minister, he will be de jure the top Turkish official since Turkey is a parliamentary republic. But de facto he will be second, after President Erdogan.

© AFP 2020 / ADEM ALTAN
Erdogan vs Davutoglu: Which Turk Will Win the West
Binali Yildirim is 60 years old. He began his career in the maritime shipping industry. From 1994 to 2000, he served as the director general of the Istanbul Fast Ferries Company (IDO). As the Director of IDO, Yildirim established a close relationship to Recep Tayyip Erdogan, who served as Istanbul's Mayor from 1994 to 1998.

For the last 13 years, Yildirim has been transport minister. Particularly, he was in charge of a series of important infrastructure projects, including the bridge over the Bosporus Strait, linking the two parts of Istanbul.

Between 2014 and 2015, Yildirim also served as special adviser to President Erdogan.

An interesting fact – like many Turkish last names, the last name Yildirim has a literal translation. In English, it can be translated as "lightning."

In 2013, Yildirim was one of several politicians named in the 2013 corruption scandal that involved numerous officials and members of Erdogan’s family. Erdogan had to use his numerous levers of influence to smoother the allegations against his ally.

"Yildirim is absolutely loyal to Erdogan. This is why the Turkish president needs him now," Viktor Nadein-Raevsky, senior fellow at the Institute of International Relations, of the Russian Academy of Sciences, told Gazeta.ru.

Turkish Presidential Press Office
Erdogan is a ‘Ruthless Tyrant Digging his Own Grave’
Former Turkish Prime Minister, Ahmet Davutoglu announced his resignation on May 4. Between 2009 and 2014, Davutoglu served as Turkish Foreign Minister and was one of Erdogan’s closest supporters and advisers. Two years ago, when Erdogan was constitutionally prohibited from being prime minister for the third term he made a power shift. He assumed presidency while Davutoglu became prime minister.

Howeverm, the first Turkish political tandem was not successful. Over the last two years, relations between Erdogan and Davutoglu have deteriorated.

After Davutoglu resigned the move was dubbed a "palace coup" by Turkish opposition politicians.

According to analysts, the former premier had softer views on countering Kurdish nationalism. Moreover, Davutoglu’s influence had grown after Ankara and Brussels reached a deal to limit the influx of refugees travelling to Europe via Turkey. Finally, Erdogan decided to remove his once-close ally from politics.

"It looks like currently Erdogan is less inclined to respect Turkey’s democratic procedures, especially if they contradict with his interests," Alexander Filonik, an analyst at the Center for Arab and Islamic Studies, at the Russian Academy of Sciences, pointed out.

Currently, Erdogan has three main political goals, including the fight against Kurds and their supporters in southern Turkey, bargaining with the EU over the migrant crisis, and making changes to the Turkish constitution. Yildirim’s loyalty will be very important for the third goal.

According to political analysts, Yildirim will act as a "low-profile" prime minister and would further contribute to Turkey’s transition from a parliamentary republic to an executive presidency, delegating greater powers to Erdogan.

Turkish Presidential Press Office
'King of Europe': Erdogan's Greatest Weakness Emerges
"As president, Erdogan feels he’s not powerful enough. He wants to have greater powers, limiting the authorities of the prime minister. In order to do this, Erdogan needs a parliamentary vote on changes to the constitution or a referendum," Nadein-Raevsky said.

Currently, the AKP hold 317 of the 550 seats in the parliament. The current number of seats is not enough to change the constitution. The procedure requires two thirds of parliamentary votes.

What is more, there are no guarantees that a referendum would be successful. A plebiscite could spark a protest of Turkey’s opposition groups.

"So, there is only one scenario left. The prime minister should be controlled by the president. Now Erdogan thinks Yildirim will play the role of such a puppet premier," the analyst explained.

However, Turkish experts say that the second tandem may also collapse.

"Yildirim seems to be exceptionally accommodating, but even this relationship may prove to be problematic," Ilter Turan, a politics professor at Istanbul’s Bilgi University, told Financial Times. "Legally, as the head of the party and the prime minister, he is legally responsible for all aspects of policy — you cannot consult the president’s opinion at all times."