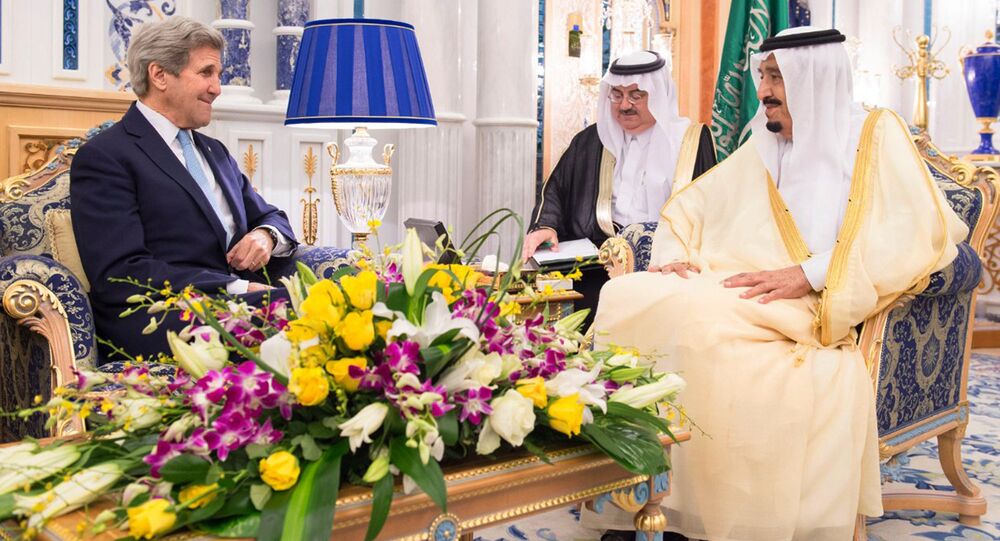 The US-Saudi plan to bring an end to the ongoing strife in Syria makes little if any sense, since Riyadh continues to support radical Sunni Islamists in the region, adding fuel to the fire of the war.

"It is true that the war in Syria cannot potentially end unless the support extremist outfits continue to receive from Saudi Arabia and its allies is cut off; however, what does not make any sense at all is how this support and the war can end when the US itself continues to provide weapons worth billions of dollars to Saudi Arabia," Salman Rafi Sheikh, a researcher and journalist focusing on international relations, writes in his article for New Eastern Outlook.

© AP Photo / Kevin Lamarque/Pool
In Kerry's Footsteps: What Saudi 'Plan B' Actually Means for Syria and Iran
The researcher calls US Secretary of State John Kerry's latest visit to Saudi Arabia a "hypocritical mission," stressing that it was just an attempt to pacify Riyadh on the eve of the Vienna talks: in the eyes of Washington Saudi Arabia remains a major bulwark against Russia and Bashar al-Assad in Syria.

"Far from being a visit to end the war, the visit's purpose was to assure the House of Saud that the US would continue to assist them in every possible way to reach the desire end of the war i.e., achieve a 'minus-Assad' Syria," Sheikh underscores, asking "how different is the US stance from that of Saudi Arabia, Turkey, UAE and their funded groups?"

The US and its Gulf allies still oppose designating the al-Qaeda affiliate al-Nusra Front's allies Ahrar ash-Sham and Jaish al-Islam as well as a number of other radical Islamist groups in the region as "terrorist" organizations.

"They have been opposing this stance for two primary reasons: first, the 'opposition' (terror groups and their supporting states) hope to eventually overthrow Assad; secondly, were the so-called 'rebel' groups to be placed on terror list, these groups could no longer be considered to have broken a truce, allowing Syria a free hand to eliminate them. Were this to happen, the US and its allies would lose their vital ground assets, amounting to an outright defeat in the war," Sheikh explains.

© AFP 2020 / STR
Saudi Arabia’s Threats to US Over 9/11 Bill is a ‘Consciousness of Guilt’
As American investigative journalist Gareth Porter narrated in his March article for Fair.org, back in February 2016 Kerry even went so far as to propose "in the Munich negotiations to 'leave Jabhat al Nusra [al-Nusra Front] off limits to bombing, as part of a ceasefire, at least temporarily, until the groups can be sorted out'." Needless to say, despite all "efforts" made by Washington, the US officials still cannot separate the wheat from the chaff in Syria.

Furthermore, in early May John Kerry gave Syrian President Bashar al-Assad a de facto ultimatum, warning "Syria's government and its backers in Moscow and Tehran… that they face an August deadline for starting a political transition to move President Bashar Assad out, or they risk the consequences of a new US approach toward ending the 5-year-old civil war," Bradley Klapper of the Associated Press (AP) reported on May, 3, 2016.

To complicate matters further, following the latest unproductive Vienna meeting, Saudi Foreign Minister Adel bin Ahmed al-Jubeir suggested that it is time to shift to 'Plan B' in Syria, stressing that the notorious plan should have been realized long ago.

"With Saudi Arabia and the US sticking to the 'Assad must go' stance, it is highly unlikely that talks can yield any meaningful result; and were the talks to fail, the House of Saud and its allies would certainly find in it an opportunity to restart funding Syrian 'rebels' on a much wider scale to boost their fragile position against the Syrian army," Sheikh warns.