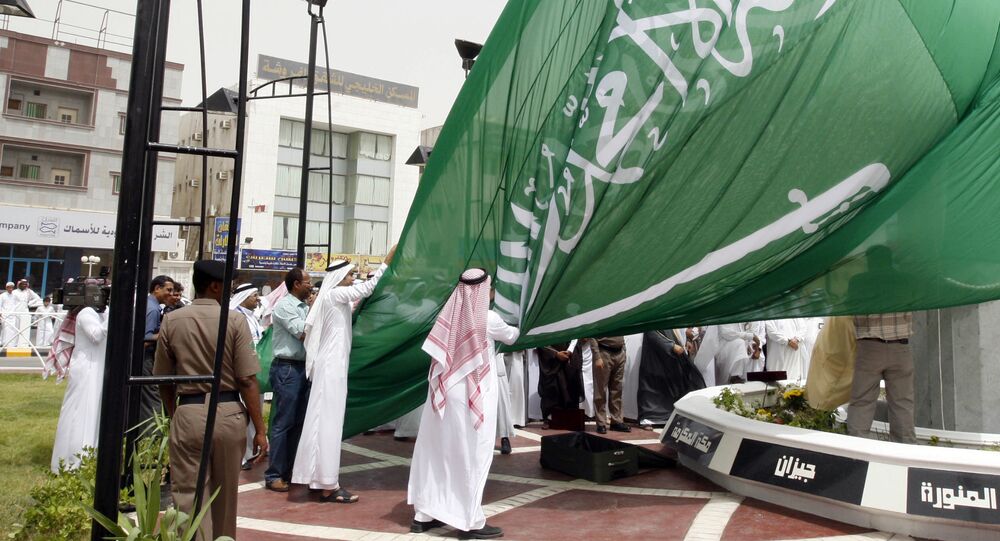 Saudi Arabia has been heavily critical of the bill, unanimously passed by the US Senate, which would allow the US to sue nation-states for terrorist attacks on its soil; the threats of Riyadh to sell up to $750 billion in US treasury securities and other assets is nothing but a ‘consciousness of guilt’, attorney Andrew Maloney told Radio Sputnik.

© AP Photo / Marty Lederhandler
'One Step Closer to Justice': US Senate Passes Bill Allowing 9/11 Victims’ Families to Sue Saudi Arabia
On Tuesday the Upper house of the US Congress, the Senate, unanimously passed a bill which would allow families of 9/11 victims to sue Saudi Arabia for any alleged role its officials might have had in the attacks.

The bill now heads to the Lower house of the Congress, the House of Representatives.

Under the document, which is called the Justice Against Sponsors of Terrorism Act, countries found to have been involved in terrorist acts committed on US soil would lose their right to sovereign immunity that protects them from lawsuits.

If it were to become law, the bill would allow families of 9/11 victims and survivors of the attacks to pursue lawsuits and seek damages from Saudi Arabia.

In this case, it would allow lawsuits to proceed in federal court in New York as lawyers try to prove that the Saudi officials played a role in the attacks on the World Trade Center and Pentagon

15 out of the 19 hijackers, involved in 9/11 attacks were Saudis, though Riyadh has always denied having any role in the attacks.

“The fact that the Senate passed it unanimously is a very strong message to the House of Representatives, to the President, to the American people and to other countries around the world that we in the US believe that victims have rights and that they should be able to have their day in court,” Andrew Maloney, attorney at Kreindler & Kreindler who represents 9/11 families, told Radio Sputnik.

© Flickr / Cyril Attias
New Evidence Points to Saudis Behind 9/11, Battle Lingers Over Redacted Papers
“Thus far, nations that we believe and have alleged to have been sponsoring the 9/11 attacks have not been yet held accountable and we want our day in court,” he added.

The attorney stressed that he believes there is strong support by many in the House of Representatives. However it remains to be seen how many and how long it will take.

Maloney noted that it is a bill that is hard to oppose.

“If opposing, you’d be opposing essentially the rights of victims to be able to hold other accountable by bringing them into American court,” he explained.

Saudi Arabia's Threats to US Over the Bill is 'Extortion, Blackmail'

© AFP 2021 / HASSAN AMMAR
Debt Threats: What Treasury's Exposure of Riyadh's US Holdings Really Means
Meanwhile, Saudi Arabia has been furiously critical of the bill, threatening to sell up to $750 billion in US treasury securities and other assets in retaliation if it becomes law.

“The fact that the Saudi are threatening the US and the economy should tell you something about consciousness of guilt,” Maloney remarked on the issue.

The attorney explained that what they have been asking for is their day in court. And the Saudis don’t want to have to answer anything in court.

The bill does not say that anybody is guilty, he explained. It only allows the victims to be able to have their day in court. To be able to conduct traditional discovery, to ask questions, to get documents, to take depositions.

So the fact that the Saudis are saying if you pass this law, they are going to try to do everything they can to disrupt the US economy is extortion, blackmail, he said.

“I find it very offensive. And many Americans and the civilized world should find it offensive.  It does put an additional strain on the relationship but I think this relationship is already strained for a number of reasons and the 9/11 attacks are one of them, the major one,” he noted.

© AFP 2021 / POOL/FAYEZ NURELDINE
9/11 Report: Why September 11 Tragedy Traces Back to Saudi Arabia
“And frankly, until we can get it pass, until we can learn what there is to learn, hold whoever is responsible accountable, we can’t have a solid relationship with the Saudis.”

The attorney also added that it is important for the Saudis to realize this ultimately will be in their interests.

He also remarked that many in the US do not believe that the threat the Saudis are making is real because if they sell their treasuries they are going to lose a lot of money doing it, they will cause a deflation of their value and they will hurt themselves worse than they will hurt the US.

President Obama 'Should Think Tiwce' Before He Vetoes the Bill

Meanwhile  President Barack Obama has said he would veto the bill.

© Flickr / Cyril Attias
Obama Likely Unable to Sustain Veto Against 9/11 Lawsuit Bill
Commenting on the announcement, Andrew Maloney said that he hopes that the House passes the legislation very soon and explained what will happen next.

And after those 10 days go by, it becomes law unless the president vetoes it.

“So President Obama will need to think twice before he vetoes this bill if we get a very large support of the House,” Maloney said.

Iran as a Counterbalance to Saudi Arabia

© Flickr / ctj71081 / Marriner S. Eccles Federal Reserve Board Building
Five Reasons Why Saudi Arabia 'Dumping' Dollar-Denominated Bonds Will not Derail US Economy
Answering to the question what will then happen to the Middle East and the balance of power in the region, the attorney said that Iran has  now become one of the counterweights to Saudi Arabia.

“They “don’t get along”, just to put it politely, with the Saudis,” he said adding that the Iranians are Shia and the Saudis are Sunni and they both are very powerful countries.

“They both have large military, and a lot of money to put into play and both of them for at least a generation have been competing with each other for power and, frankly, the control of Islam, if you will.”

And so they both are important and influential players, he said, adding that part of the strain between the US and the Saudis has been over the US’s attempt to soften or defrost the relations with Iran. The nuclear deal has been the first step in this process.

'If You Lost a Loved One, There is a Sentiment You Need to Find Out What Happened'

© Flickr / Kārlis Dambrāns
9/11 US Families Must Still Prove Saudi Complicity If Allowed to Sue
At the end of his interview the attorney explained why this bill is so important for the relatives of the victims.

“For the relatives it is more than a principle,” he said.

“If you lost your loved one, there is a sentiment that you will always carry for your entire life — that you need to find out what happened, you need to hold people accountable.”

The people were murdered, he explained and now the relatives want to bring murderers to justice.

“It is a very human nature instinct for anybody to have if you lost a loved one who has been murdered. You would want to hold murderers accountable. So that is not just symbolic, that is a very real thing that they have lived with since September 11, 2001,” he finally stated.

Will 9/11 Victims Soon Be Able to Sue Saudi Arabia?