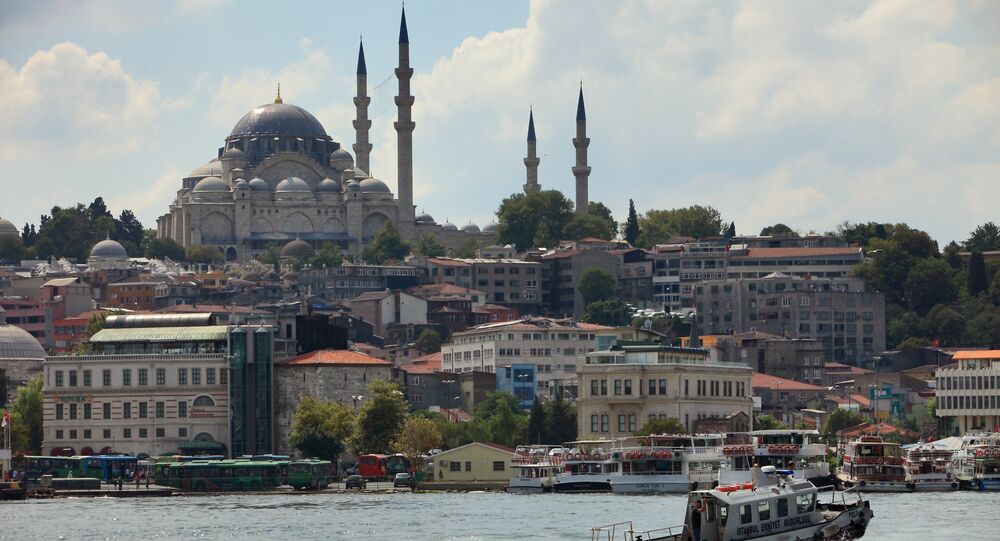 Angela Merkel cannot transform Turkish President Erdogan from an 'Oriental despot' into a respectable member of the European family, Deena Stryker writes, warning that Europe may fall into the neo-Ottoman trap.

All German Chancellor Angela Merkel got for enlisting Turkish President Erdogan's help in coping with the European refugee crisis is a dramatic drop in poll numbers, renowned international expert, author and journalist Deena Stryker writes in her article for New Eastern Outlook entitled "Was a United Europe a Mirage?".

"That glazed look that regularly comes upon the face of Recip Tayep Erdogan should have warned her that he has a severe case of Ottomanossis," Stryker remarks.

Furthermore, having sacked Davutoglu the Turkish president claimed that he is not ready to meet all the EU's demands, covering in particular a loosening of Ankara's controversial anti-terror law, in exchange for implementing visa-free travel for the Turks.

"Make no mistake, Erdogan will not blink if the West resorts to pressure tactics. He will never agree to certain key 'preconditions' of the EU deal that Davutoglu negotiated whereby Turkey is required to change its anti-terror legislation in line with the European acquis and the jurisprudence of the European Court of Human Rights," Ambassador M. K. Bhadrakumar wrote in his article for the Indian Punchline blog, commenting on the matter.

Indeed, over the past several months Erdogan has expressed disdain to all European norms and values.

"During the past several months, he [Erdogan] has defied Western norms of behavior toward journalists, killing and jailing them right and left, accusing them of supporting Turkey's Kurdish minority," Stryker points out.

Turkish Presidential Press Office
Turkish Gov't Unable to Revise Anti-Terror Laws Amid Erdogan's Power Grab
"History is a powerful motivator, and when the Turkish President, who until recently had been begging to be admitted into the European Union, flouts its basic rules of behavior, it's clear that he sees himself completing the Ottoman domination of Europe," she stresses.

Journalist and geopolitical analyst Martin Berger echoes Stryker, asking whether there is "any backbone left in the EU" in the face of Erdogan's sheer blackmail in his analysis for New Eastern Outlook.

He cites President of the European Council Donald Tusk who published an opinion article in late April 2016 urging the EU nations to adopt new migration policies.

"No one else is going to protect our borders for us. We cannot hand over the keys to our territory, to our security, to any third country. This applies to Turkey as well as to north African countries. Our helplessness would tempt others to blackmail Europe," Tusk stressed in his Op-Ed published in seven European newspapers including the Guardian.

"Too often I have heard from our neighbors that Europe should give in, otherwise it will be flooded by migrants," the President of the European Council remarked in obvious reference to repeated threats voiced by Ankara.

© REUTERS / Umit Bektas
Away From EU: Erdogan Has His Hands Untied After Davutoglu's Resignation
"Recent experience with Turkey shows that Europe must set clear limits to its concessions. We can negotiate money but never our values. We cannot impose our standards on the rest of the world. Equally, others cannot impose their standards on us. Our freedoms, including freedom of expression, will not be part of political bargaining with any partner. The Turkish president must heed this message," Tusk emphasized.

Stryker notes that while the world is busy with countering the Daesh threat, Ankara is quietly realizing its own geostrategic goals in Europe. The EU should avoid falling into the neo-Ottoman threat.

"Europe is experiencing a combination soft/hard takeover: by the refugees on one hand, and a neighboring ruler [Erdogan] nurtured by the US, but no longer ready to play the role of subordinate either to Europe or NATO. While ISIS [Daesh] — even with not so covert Turkish help — can eventually be brought to heel, Erdogan's plan is already partly realized, thanks to Europeans themselves," the renowned journalist underscores.