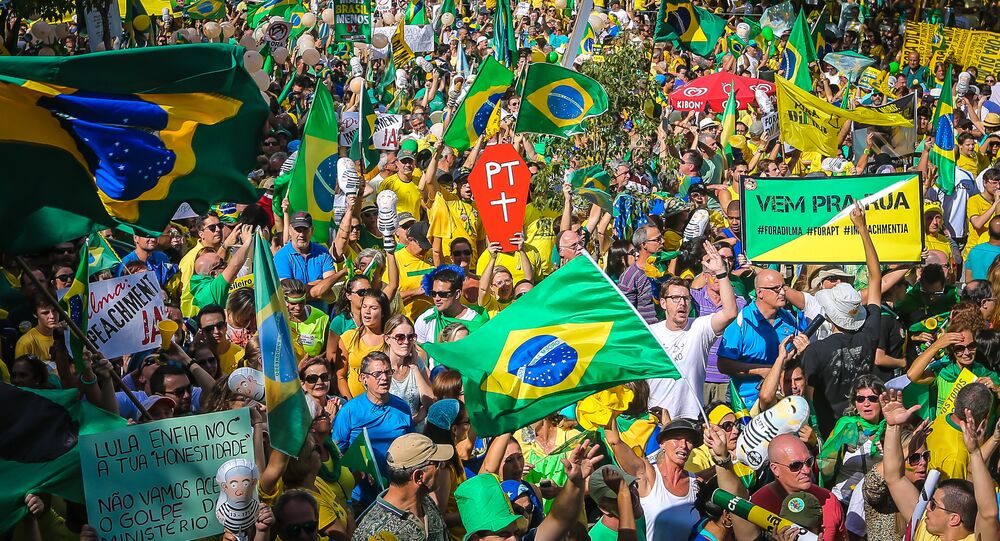 Dilma Rousseff's impeachment has dealt a heavy blow to Brazil's democracy, giving the country's corrupt neoliberal elite free reign, experts say, adding that the case has all the earmarks of a "color revolution."

Brazil's young and vibrant democracy is under threat as an unelectable corrupt neoliberal political elite have taken the reins of power from President Dilma Rousseff of the Workers Party (PT), prominent American journalist, lawyer and author Glenn Greenwald warns in his recent article for The Intercept.

"As someone who has lived in Brazil for 11 years, it's been inspiring and invigorating to watch a country of 200 million people throw off the shackles of a 21-year-old right-wing (US/UK supported) military dictatorship and mature into a young, vibrant democracy and then thrive under it. To see how quickly and easily that can be reversed — abolished in all but name only — is both sad and frightening to watch," Greenwald writes.

Although PSDB and its sponsors have poured big sums of money into defeating former Brazilian president Lula da Silva and then his successor Dilma Rousseff, they have repeatedly failed.

"In sum, PT has won four straight national elections — the last one occurring just 18 months ago. Its opponents have vigorously tried — and failed — to defeat them at the ballot box, largely due to PT's support among Brazil's poor and working classes," Greenwald notes.

"So if you're a plutocrat with ownership of the nation's largest and most influential media outlets, what do you do?" he asks.

Predictably, Brazilian tycoons threw their weight behind their candidates, "who could never get elected on their own," and exploited their media outlets to incite unrest in the country.

© AFP 2019 / EVARISTO SA
Why the Coup in Brazil Should Fail
While accusing Rousseff and her party members of corruption, Temer "is awash in corruption" himself, Greenwald notes.

"Accused by informants of involvement in an illegal ethanol-purchasing scheme, he was just found guilty of, and fined for, election spending violations and faces an 8-year-ban on running for any office," he writes.

It begs the question of who is actually behind the recent Brazilian political turmoil.

Closely monitoring the political developments in Brazil American political analyst Eric Draitser noted in his March article for Mintpressnews.com that the protest movement brewing in the country has Washington's fingerprints all over it.

"The right wing is the driving force of the protests… Two of the principal groups responsible for organizing and mobilizing the demonstrations are the Free Brazil Movement (MBL) and Students for Liberty (EPL), both of which have direct ties to Charles and David Koch, the right-wing, neocon, US billionaires, as well as other leading figures of the far right, pro-business neoliberal establishment," Draitser underscored.

© REUTERS / Adriano Machado
People in Glass Houses? '60% of Rousseff’s Accusers in Corruption-Related Proceedings'
He remarked that the right-wing, pro-US elements inside and outside Brazil "are particularly angered at the Worker's Party and, more broadly, the left."

"This is not because of corruption — though corruption undoubtedly remains a problem — but because of the ascendance to power of political forces representing working class and poor Brazilians," the US political analyst emphasized.

Political analysts Pepe Escobar and Andrew Korybko echoed Draitser in their analyses for Sputnik and OrientalReview.org.

"This sorry saga has nothing to do with corruption, allegedly the key motive behind the sprawling, two-year-old, initially NSA spying-fueled Car Wash investigation. It's all about dirty political opportunism," Escobar wrote in his April article entitled "Why the Coup in Brazil Should Fail."

Both Escobar and Korybko dub what is going on in Brazil a "hybrid war."

"At the moment," Korybko wrote on April 25, "it looks like the 'constitutional coup'-Color Revolution two-step might succeed in removing Rousseff and replacing her with Vice-President Michel Temer, who had actually been practicing his post-coup address to the nation in a recently leaked speech."

The analyst's prognosis came true. On May 13 Brazil's interim President Michel Temer addressed the Senate saying "Together we can overcome this moment of great difficulty. It is urgent to calm the nation and unify the nation, create a government of national salvation."

There is something really fishy about Temer. To justify the analysts' suspicions WikiLeaks tweeted on May, 12:

WikiLeaks released two US diplomatic cables which contain Temer's detailed report on the prospects to defeat the Brazilian leader Lula da Silva in the 2006 presidential election.

"Federal Deputy Michel Temer, national president of the Brazilian Democratic Movement Party (PMDB), believes that public disillusion with President Lula and the Workers' Party (PT) provides an opportunity for the PMDB to field its own candidate in the 2006 presidential election," the cable, sent on January 11, 2006 to US Secretary of State, read.

There are serious suspicions that the current development in Brazil traces back to Washington. The whole affair looks strikingly similar to the other "regime change operations" launched by the US policymakers.

However, the major problem is that the new interim government poses a threat to Brazil's democracy.

"Whatever damage PT is doing to Brazil, the plutocrats and their journalist-propagandists and the band of thieves in Brasilia engineering this travesty are far more dangerous. They are literally dismantling — crushing — democracy in the world's fifth-largest country," Greenwald writes.

"It's also an important lesson for anyone, in countries all over the world, who blithely assume that things will continue as is or that they're guaranteed stability and ongoing progress," the journalist warns.

Rousseff’s Impeachment Could Lead to New Elections in Brazil