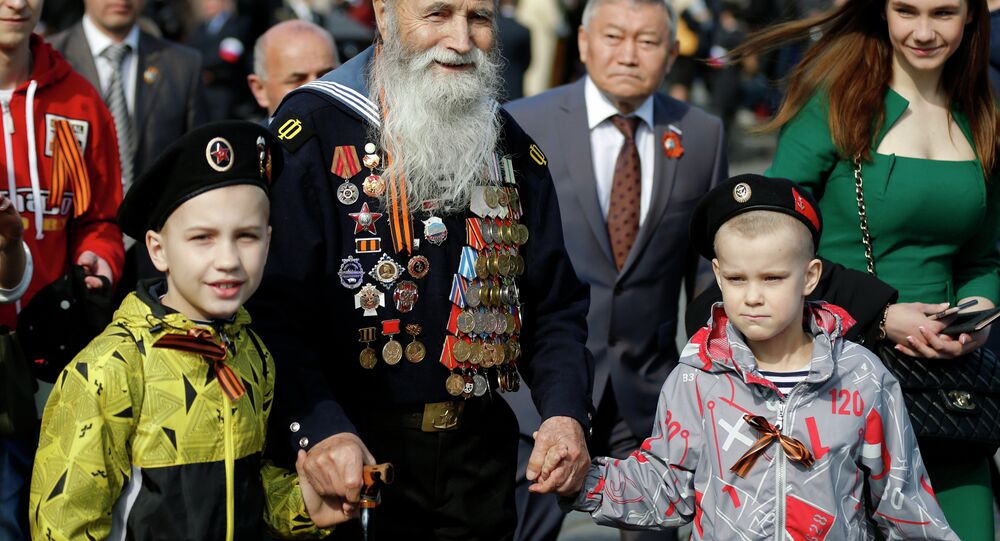 "Is it any good to hold ceremonies and grandiose parades to commemorate the devastating World War II?" some Western social media users asked, following the May 9 Victory Day parade in Moscow. Gilbert Doctorow and Edward Lozansky believe that WWII memories are of great importance to both Russia and the West.

On May 9, the Victory Day parade in Moscow marked the 71st anniversary of Nazi Germany's surrender to the Soviet Union in May 1945.

The USSR's Great Patriotic War against the Nazi invaders became the most important part of World War II and decided the outcome of the global conflict.

However, "to most Americans, the anniversary of the defeat of Nazi Germany slips by unnoticed," Michael Birnbaum of the Washington Post writes.

vk.com
The 5 Most Popular Myths About the Soviet Union's Role in WWII, Busted
Furthermore, some Westerners even go so far as to wonder whether it is any good to stir up unpleasant memories of the outdated conflict.

"It [V-Day celebration in Moscow] has nothing to do with the US," a user named autumnlight wrote in the comments for the Guardian's article about Russia's 2016 Victory Day Parade, "Also, unlike WWII Remembrance Day celebrations in the UK, the Russian Victory Day parades look quite aggressively militaristic — more like a 'show of strength' than a reflection on the horror of war."

"These soldiers are not celebrating their own victory, but the victory of their grandfathers, few of whom are still alive. What is it these soldiers deserve exactly? And why?" another user dubbed BlueTooth2 added.

"Only the weak have to show the extent of their power… the good ole USSR!" a user called TonyBags noted in comments below the Business Insider's report.

So, are they right? Maybe it's time to sweep the old story under the rug?

According to Gilbert Doctorow, the European coordinator of the American Committee for East-West Accord, and Edward Lozansky, the president of the American University in Moscow, the WWII memories are of ultimate importance, not only to the Russian Federation and former Soviet Republics, but also to the West.

© AP Photo / Alexander Zemlianichenko
Rewritten by the Ignorant: WWII Historical Revisionism Holding Sway in West
"May 9 is celebrated as Victory Day in Russia, commemorating that nation's role in and victory over Nazi Germany in World War II," Doctorow and Lozansky note in their Op-Ed for the Washington Times.

The scholars bemoaned the fact that the 40 years of the Cold War and recent tensions between Washington and Moscow made many forget that Russia and the United States were allies and fought together against Nazi Germany 70 years ago.

"It is a partnership that should not be forgotten," they stress.

The scholars recalled that "Russian President Vladimir Putin harked back to our World War II alliance when he spoke before the United Nations General Assembly last fall and called for a new US-Russian joint effort to lead a multinational effort to defeat Islamic State."

Doctorow and Lozansky emphasize that "common sense dictates that we seek ways to engage with one another in a spirit of equality and mutual respect."

Indeed, the Grand Alliance made during the World War II brought together the Soviet Union, the United States and Great Britain. The Allied powers broke the Nazi war machine and lay the foundations of the so-called Yalta-Potsdam system of international relations.

It should be noted that the USSR, which lost about 27 million people in the course of the World War II, won both a military and a resounding moral victory in the war over the very idea of Nazism and fascism.

© Sputnik / Ekaterina Shtukina
Most ‘Valuable Conclusions’ Western Media Makes About Moscow’s V-Day Parade
Moreover, the Great Patriotic War had restored the unity of the "Russian world": only a few of Russia's "white émigrés" in the West vowed their support to Adolf Hitler. Most former "white" Russian generals took the side of the Soviet Union, despite the political discord.

Russia had also revived its spiritual traditions during the war. You would be surprised to know that it was Joseph Stalin, the Communist leader and Supreme Commander, who revived the Russian Orthodox Church in the USSR back in September 1943.

There is yet another reason for Russia and the West not to forget the historic lessons of World War II. In the almost prophetic Soviet movie "Alexandr Nevskiy" released in 1938, the main character, Russian prince Alexandr, warned: "Those who come to us in peace will be welcome as a guest. But those who come to us sword in hand will die by the sword!"

The warning remained largely neglected and in 1941 Nazi Germany treacherously attacked Russia. However, about two years later William Hoffman, a German soldier who perished at Stalingrad in 1943, wrote in his now famous diary:

"The Russians are not men, but some kind of cast-iron creatures; they never get tired and are not afraid of fire. We are absolutely exhausted; our regiment now barely has the strength of a company… If they [the Germans] could only see what Stalingrad has done to our army… A curse on this war!…" (Sources of the Western Tradition by Marvin Perry, 2005).

In his interview on The John Batchelor Show Professor Stephen F. Cohen noted that NATO's recent muscle flexing near Russia's northwestern borders may evoke serious fears and memories of the Nazi German invasion in Russian minds, aggravating further tensions between Washington and Moscow.

"If you see this through Russia's eyes there has not been any formidable military force amassed on its borders since the German invasion in 1941. And that might be the most searing living memory in Russia. Twenty-seven point five million Soviets died in that war [the Great Patriotic War]," the American scholar pointed out.

Echoing Cohen, Doctorow and Lozansky point out that in the eyes of Moscow, Washington's decision to expand NATO in the east toward Russia's borders is an "aggressive anti-Russian mistake." They cite the legendary diplomat George Kennan, who called it a "strategic blunder of potentially epic proportions."

The United States and Russia are different in many ways due to their distinct historical experience, the scholars note, insisting that there are also many ways in which the Russians and the Americans are alike.

"Our peoples hope and pray that we will never again face another world war that costs so much in blood, treasure and lost opportunities," the scholars emphasize.

"The threats we face today trouble leaders in Moscow and in Washington who should remember as we celebrate our World War II partnership what we have been able to accomplish when we've worked together," Doctorow and Lozansky conclude.