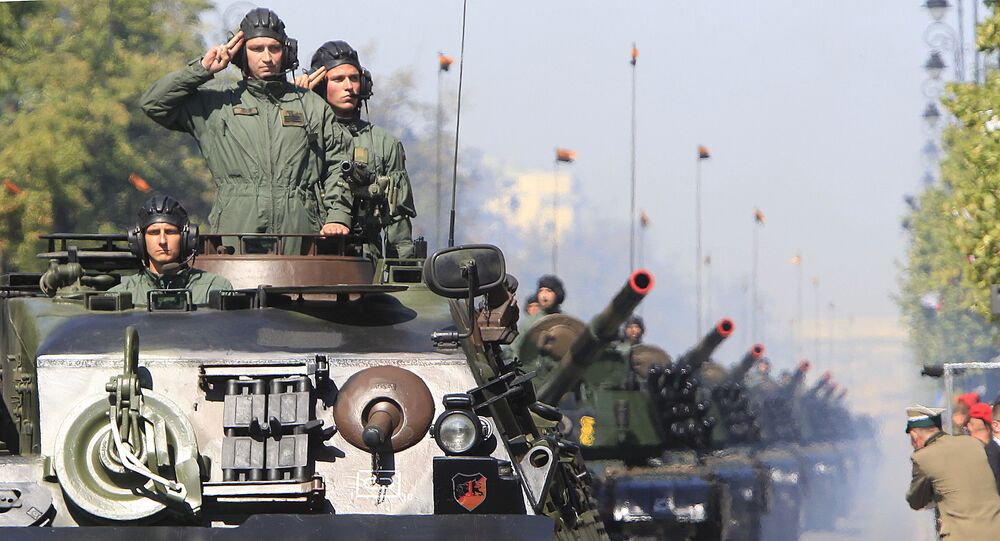 As US warships, jets and spy aircraft increase their presence off Russia's coasts in the Baltic Sea and the Russian Far East, Poland says it may have found a way to calm tensions and prevent a dangerous conflagration.

© AP Photo / Mindaugas Kulbis
Shadowboxing: 'Russian Bogeyman' is NATO's Last Chance to Stay Afloat
Warsaw is proposing to strengthen the security role of the Organization for Security and Cooperation in Europe (OSCE), in order to prevent dangerous confrontations of the kind which have become a regular occurrence in the past two months between Russian and NATO planes and warships near Russia's borders, Russia's Kommersant newspaper reports.

The diplomat explained that seven other countries have signed on to the Polish proposal, including "the Baltic countries and other countries of the West," and added that Poland hopes that its proposal will be adopted by the organization by the end of the year.

In recent weeks, US aircraft have repeatedly tested the Russian military's ability to defend its borders. In late April, media reports emerged that a Russian MiG-31 had intercepted a US Navy P-8 Poseiden spy plane off the coast of Kamchatka in Russia's Far East on April 21, flying up to within 15 meters of the US aircraft.

© Sputnik / Igor Zarembo
As NATO Expands Along Russia's Borders, Did It Not Get Putin's Message?
On Tuesday, reports emerged that a US RC-135W spy plane was tracked down and intercepted flying over the Baltic Sea off the Russian border. That same plane was reported to have conducted reconnaissance near the Russian exclave region of Kaliningrad on May 9, where it had been intercepted by a Su-27 jet.

Late last month, Pentagon officials claimed that a Russian Su-27 had performed a "barrel roll" less than 7 meters off another RC-135 flying in the same region, an allegation the Russian defense ministry later denied. In early April, the Pentagon vigorously complained about Russian Su-24 jets repeatedly harassing the US Navy destroyer Donald Cook as it sailed 70 km off a Russian naval base in the Baltic Sea.

Is the Polish Proposal Realistic?

— Will Poland's proposal include any efforts to counter the increasing buildup of NATO forces and heavy equipment on Russia's borders, and the launching of larger and ever-more numerous NATO exercises? It's well-known that Warsaw itself has been pushing for an increased permanent NATO and US presence on its territory ahead of the alliance's Warsaw summit in July.

— What will become of Polish Defense Minister Antoni Macierewicz's proposal to double the funding and size of the Polish armed forces? How can this possibly serve to deescalate tensions?

— Are Polish officials ready to tone down their anti-Russian rhetoric, which has reached absurd heights in recent months? (Last month, Polish Foreign Minister Witold Waszczykowski claimed that Russia, not the Daesh terrorist group, was the real 'existential threat' to Europe. Earlier this year, Macierewicz said that the 2010 air catastrophe in the Russian region of Smolensk, which resulted in the death of the Polish president and his staff, was actually a 'terrorist attack' by the Russian government).

— Finally, and perhaps most importantly: Will Warsaw's proposals be heard in Washington, where the real decisions on European security policy seem to be made? That seems unlikely amid the Pentagon's plans to quadruple its European spending, and to increase its presence and activity on Russia's borders from the Baltic to the Black Sea.