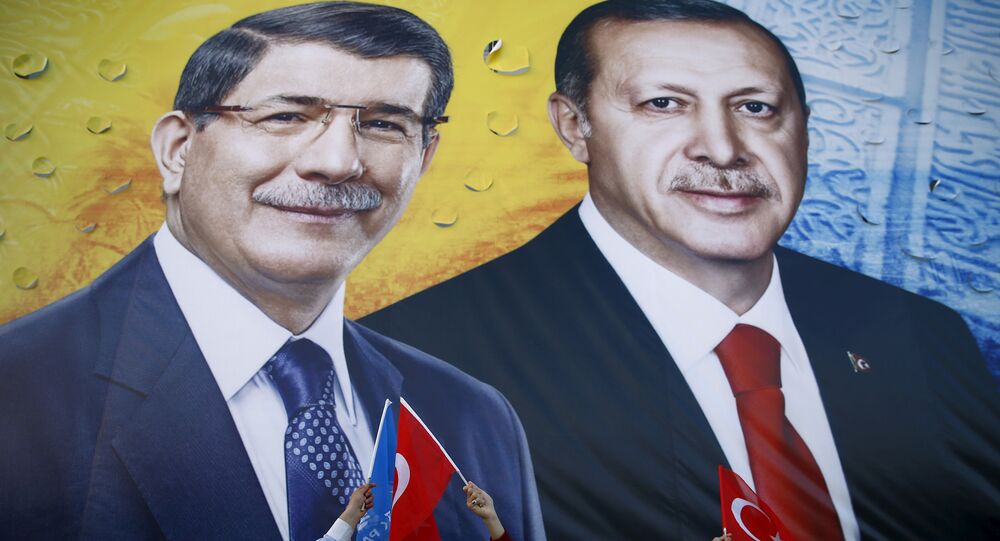 Does Ahmet Davutoglu's resignation mean a strategic reorientation of Turkey's foreign policy away from Europe and the US to the Islamic world? After Davutoglu's removal from the top echelons of power President Recep Erdogan now has his hands untied, M.K. Bhadrakumar notes.

The removal of Turkey's prime minister Ahmet Davutoglu from power has given the EU powers quite a jolt: the Turkish politician leaned toward closer cooperation with the West. While he was the architect of "neo-Ottomanism," he was at the same time considered a "modernizer."

As Cengiz Candar of Al-Monitor's Turkey Pulse noted, "The era of Davutoglu in Turkish, international, Middle Eastern and Islamic world politics has come to an end… He coined the famous motto 'zero problems with neighbors.' Yet… There is nearly no neighbor or a major international player that Turkey does not have acute problems with."

"The impact of Turkish President Recep Erdogan's move Wednesday to replace Prime Minister Ahmet Davutoglu is already being felt in the western chancelleries with the signs that the scenario now is one of an acrimonious divorce between Ankara and the European Union," Ambassador M. K. Bhadrakumar, former career diplomat in the Indian Foreign Service, writes in his article for the Indian Punchline blog.

© AFP 2021 / Yasin Bulbul/Presidential Press Service
Taste of His Own Medicine: Erdogan Accuses Europe of Dictatorship, Cruelty
The situation is complicated by the fact that Davutoglu played a key role in concluding the refugee deal with the EU and Germany. That is all the more reason for Berlin to worry.

"The agreement is concluded with governments and states, not with persons. This is key. Everything arranged must be implemented. There are appropriate treaty obligations. We both must work hard on them," Schaefer emphasized during a briefing.

"Of course, the refugee problem is an existential issue for the EU — and for German Chancellor Angela Merkel, in particular, whose political prestige is at stake," Bhadrakumar notes.

However, Berlin cannot boast having Erdogan on a string.

"Make no mistake, Erdogan will not blink if the West resorts to pressure tactics. He will never agree to certain key ‘preconditions' of the EU deal that Davutoglu negotiated whereby Turkey is required to change its anti-terror legislation  in line with the European acquis and the jurisprudence of the European Court of Human Rights," the Indian former diplomat remarks.

"On the question of visas, let those who call on Turkey to modify its anti-terrorism law start by removing tents set up by the terrorists at the doors of the European Parliament," Erdogan said in his speech in the city of Malatya.

According to Bhadrakumar, there are clear signs that Erdogan will shift Turkey's domestic and regional policy from "neo-Ottomanism" to nationalism, centralizing power and transforming the country into a "presidential system." The Indian expert suggests that the Turkish President may appoint his son-in-law Berat Albyrak (presently energy minister) to the position of Turkey's prime minister in order to strengthen his own power.

Predictably, the current changes trigger deep concerns in Turkey's "pro-Western" camp and there are justified fears that EU-Ankara relations may soon nosedive.

"Davutoglu's absence from the top echelons of power leaves the 'Sultan' who considers himself to be the monarch of all he surveys an even freer hand to charter the Turkish ship along the Middle Eastern waters in a strategic reorientation of foreign policies away from Europe and the US to the Islamic world," Bhadrakumar underscores.