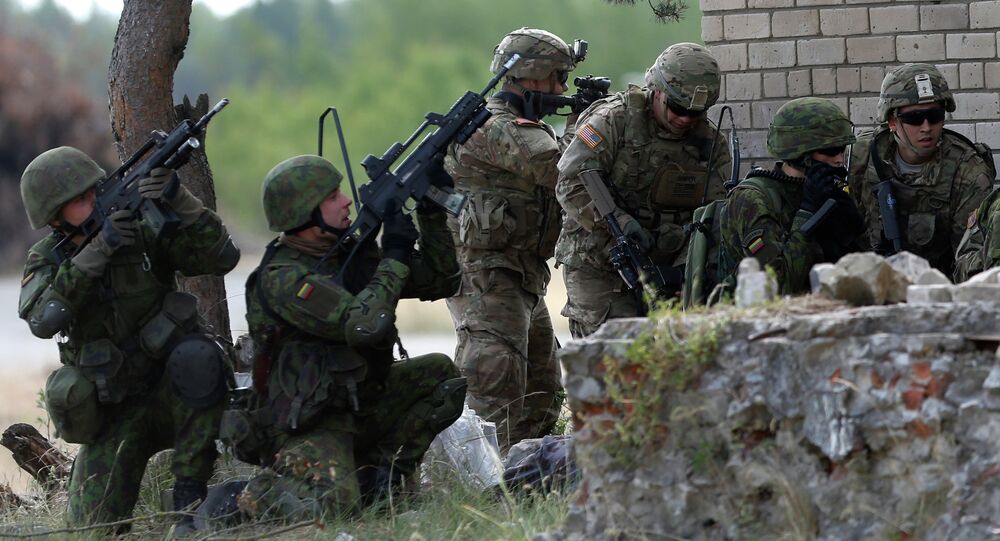 NATO is dying of pointlessness, investigative journalist Seth Ferris writes, adding that at the root of the Alliance's effort to present Russia as a "bogeyman" lay the organization's waning hope to stay afloat.

Following NATO's embarrassing failures in Iraq, Syria, Libya and Afghanistan, the alliance is shifting its focus from the MENA (the Middle East and North Africa) region to Eastern Europe: the Western allies are preparing to deploy about four thousand troops in Poland and the Baltic states, investigative journalist and political scientist Seth Ferris writes.

"Like the League of Nations and French Community before it, NATO is dying of pointlessness. It won't survive unless it can find a higher purpose — and having failed to do so, its only option is to demonize Russia, the enemy everyone grew up with, regardless of what it might actually be doing," Ferris notes in his article for New Eastern Outlook.

"As we continue our critical mission in Afghanistan, we also face a resurgent Russia, striving to project itself as a world power, face terrorism and the refugee crisis being driven by instability in North Africa and the Middle East. To address these challenges, we must continue to maintain and enhance our level of readiness and our agility in the spirit of being able to fight tonight if the deterrence fails," Scaparrotti said in an official statement.

It looks as if the old days of the 40-year Cold War have returned.

The argument offered by Washington and NATO is illogical, according to Ferris.

"The present Russian administration is the same one the West sought to 'reset' relations with when Obama took office. It even has the same foreign minister. If the West has suddenly discovered something new and disturbing about this administration, what is it?" he asks.

© Flickr / UNC - CFC - USFK
Worse Than Breedlove? NATO's New Commander Gets Off on the Wrong Foot With Russia
NATO's assumption that Moscow is harboring plans to attack the Baltic states does not hold water. There is no evidence that anything like that has ever been considered by the Kremlin.

"If Russia did have any such intention it would have to take on the whole of NATO, not the fractured individual states of 1940, and knows it," Ferris explains.

The journalist notes that the Russian military forces are holding their military exercises in the north-west of the country as a response to NATO's active saber-rattling in the Baltics and in Poland.

Ferris echoes Stephen F. Cohen's thoughts, which the US academic voiced in his recent interview on The John Batchelor Show.

Incredible as it may seem, the Kremlin's reaction to NATO's military maneuvers in Eastern Europe is presented as "Putin's aggression" against Europe, the Baltic states, and the alliance itself, Professor Cohen remarked.

"One military guy even said: 'Putin is moving his troops closer to NATO'… NATO is moving closer to Russia, Russia doesn't move. It is where it is. It's NATO that has been on the move ever since the 1990s," the US scholar underscored.

© Flickr / U.S. Army Europe Images
Now NATO Tries to Frighten Russia as ‘It was the First to Start’
In the eyes of the Pentagon and NATO, "Russia's 'provocative action' is simply to be Russia," Ferris stresses.

"When all else fails, it is the standing enemy Westerners can understand," he adds.

The problem is that NATO desperately needs an enemy to pay its bills and justify its existence.

The Western military bloc was originally created to deter the USSR. Since the collapse of the Soviet Union and the Warsaw Pact NATO has faced the existential dilemma.

Interestingly enough, in the late 1980s Georgiy Arbatov, director of the Soviet's Institute for US and Canadian Studies, told Washington's policymakers: "We [the Soviet leadership] will do the most horrible thing to you; we will leave you without an enemy."

The remark was prophetic.

"The West is getting nowhere in its supposed assaults on Islamic terrorist groups because it is actually arming and supporting them, and always has done to suit itself. But it can't admit this to the public, as then that same public would want to string them up. So all that is left is to restore NATO's original purpose and attack Russia," Ferris elaborates.

This political attack that the West is preparing to make is a very dangerous gamble, the journalist warns.