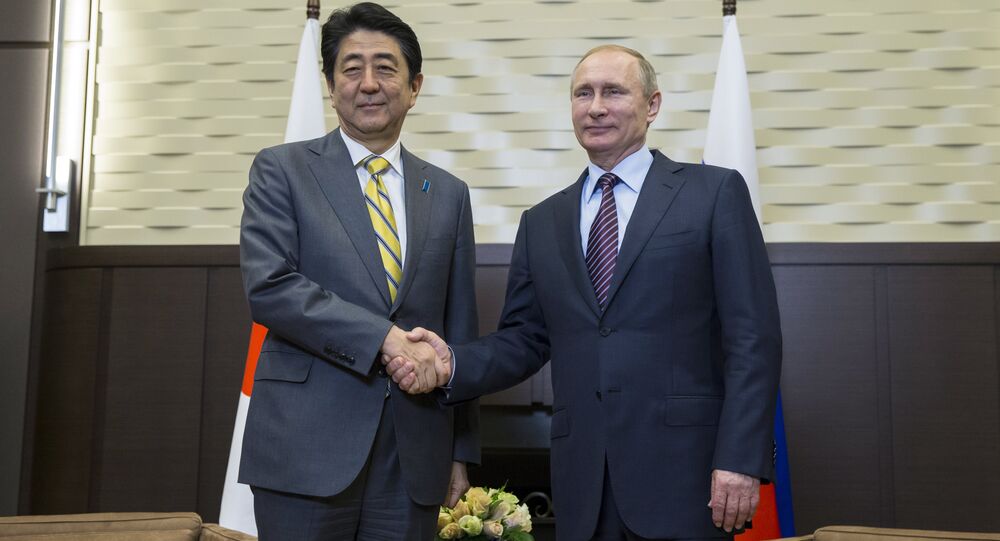 Japanese Prime Minister “said that he could feel a breakthrough” in Japan’s relationship with Moscow following his trip to Russia and meeting with President Putin; Chinese news agency Xinhua however suggested that there were other purposes behind Shinzo Abe’s trip to the Black Sea resort of Sochi.

“I got the sense that we can achieve a breakthrough in the stagnated situation,” Abe told reporters following the talks with President Putin in Sochi on May 6 with respect to Japan’s relationship with Russia and the territorial dispute between the two.

© Sputnik / Sergei Guneyev
Abe Suggests New Approach to Kuril Islands Dispute
The two leaders agreed that they will proceed with negotiations on the issue using “an approach based on a new concept.”

Even though the two sides did not disclose any details, the new approach was described as taking into consideration a global perspective — not just bilateral relations — and holding negotiations from a future-oriented standpoint.

During the talks, Abe presented a plan comprising eight areas of cooperation, including energy development and building infrastructure in Russia’s Far Eastern region.

However Chinese news agency Xinhua described the visit as just “a diplomatic maneuver generating no progress on the four disputed pacific islands.”

© Sputnik / Mikhail Klimentiev
Issue of Kuril Islands Discussed Very Constructively at Putin-Abe Meeting - Kremlin
And it is impossible for a single “unofficial” visit to bridge so wide a gap in positions between the two countries.

“It's impossible for Japan to create conditions for signing a bilateral peace deal and solving the territorial dispute just by this (Abe's) visit,” the agency quotes him as saying.

His view was somewhat confirmed by Japan’s Chief Cabinet Secretary Yoshihide Suga, who said at a press briefing on Monday that Japan’s position remained unchanged.

“First the return of four islands, then the signing of a peace treaty,” he noted.

Suga however said that “this time, the two sides agreed to continue their dialogue based on new ideas, rather than old ones with an aim for a breakthrough in the ongoing negotiations,” without any further elaboration.

“Firstly, the visit was intended to amend ties with Russia and break the diplomatic predicament with neighboring countries,” it says.

“Since taking office, the Abe ministration has been increasingly hawkish in dealing with diplomatic affairs, resulting in a strained relationship with all neighboring countries, including Russia,” it quotes Zhou Yongsheng, a professor at China Foreign Affairs University as saying.

Secondly and more importantly, the agency says, the visit was intended to “distract public attention and garner support for a victory in the parliamentary election.”

Abe’s government has taken a series tough actions including enforcing the new security laws, and a persistent weak economy despite Abe's “three arrows” of monetary easing, fiscal stimulus and structural reforms have both greatly angered the Japanese voters, he said.

“Abe is now trying to play the diplomatic card to distract public attention and garner support for a victory in the parliamentary election in July, which Abe hopes will facilitate his bid to amend the Constitution,” added the expert in foreign affairs.

“With US President Barack Obama's term coming to an end thus the US diplomatic influence waning, and with both the US and Russia softening attitudes on thorny issues such as Syria, Abe saw it as good timing to pay a visit to Russia,” he said.

However, Japan's unilateral move to mend ties with Russia without America's consent might jeopardize its relations with its important ally, as Washington" does not approve the top-level contact between Russia and Japan," the agency added.

“Abe's Russia visit is a diplomatic maneuver like a double-edged sword to Japan,” it concluded.

© AFP 2021 / KARL-JOSEF HILDENBRAND
G7, EU Unity Remains Vital in Approach to Russia After Putin, Abe Meeting - US State Dept.
Meanwhile, the two leaders agreed that they will have another meeting when Abe visits the Russian Far Eastern city of Vladivostok in September.
The two countries are said to continue to examine the timing of Putin’s visit to Japan.

Right after the talks between the two leaders on Friday, Kremlin spokesman Dmitry Peskov commented that talks on the disputed Kuril Islands had been “constructive.”

“The issue was raised in a very constructive way. The contacts will continue at the level of foreign ministers,” Peskov told RIA Novosti.

A territorial dispute over the Kuril Islands has prevented Russia and Japan from signing a peace treaty after World War II behind Tokyo's claims to Kunashiri, Etorofu, Shikotan islands and the Habomai group of islets dividing the Sea of Okhotsk from the Pacific Ocean.

Moscow maintains that the 1951 San Francisco Peace Treaty transferring control of the islands to the Soviet Union stipulates Russian sovereignty over the Kurils, which Tokyo considers as its northern territories.

Following the talks and the comments of the two leaders, the US has already called on the EU and G7 to remain in unity over their approach to Russia.

"Continued unity among our partners including the European Union and the G7 remain vital in our approach to Russia," US Department of State spokesperson Elizabeth Trudeau said on Monday when asked to comment on Putin’s meeting with Abe.