Japanese Prime Minister Shinzo Abe is scheduled to meet with Russian President Vladimir Putin on Friday as part of Tokyo's consistent strategy of cultivating cordial relations with Moscow. The unofficial visit, many say, also serves as the latest indication that Washington's attempts to isolate Moscow have failed.

Abe's visit to Sochi shows "how committed Japan is to advancing its national interests," political scientist Fyodor Lukyanov wrote for Rossiyskaya Gazeta. This is not a courtesy visit for the Japanese prime minister, he added. Abe "is convinced that Tokyo's relations with Moscow are critically important in the long term."

The Vzglyad business newspaper shared the sentiment, saying that Abe did not add Sochi to his European tour to discuss Russia's relations with the West.

"Abe wants to foster Japan's ties with Russia. It's no coincidence that he was the only leader of a G7 member state who was present at the opening ceremony of the 2014 Winter Olympics in Sochi," the media outlet noted.

© AP Photo / Mikhail Klimentyev
Japan’s Prime Minister Invites Putin to Tokyo Despite Washington’s Fury
The timing of the visit is also significant. Abe has returned to Russia at the time when Washington is tentatively working together with Moscow to solve the Syrian crisis (both countries are sponsors of the UN-backed peace process) and "can no longer demand that Tokyo adhere to the strategy of isolating Russia," the publication added.

In fact, this policy has long been doomed. "This is yet another indication that Obama's policy of isolation has failed," Alexey Pushkov, chairman of the State Duma's Foreign Affairs Committee, told Bloomberg. "It's an important visit that shows that Japan has decided not to put all its eggs in one basket."

Washington has not been happy with Abe's decision to come to Sochi. In February, US President Barack Obama asked the Japanese prime minister to postpone his visit until after the Group of Seven summit that will be held in Japan's Ise-Shima region on May 26-27. 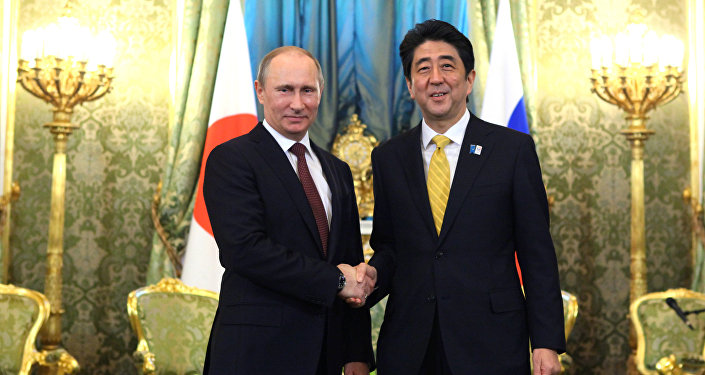 © Sputnik / Michael Klimentyev
Japan's Delicate Balancing Act: Washington's Key Ally Wants to Be Friends With Russia
Putin and Abe are set to discuss eight areas of cooperation, as well as the decades-long territorial dispute. Moscow and Tokyo are not expected to reach an agreement on the islands that Russia refers to as the Southern Kurils and Japan calls the Northern Territories during the Friday meeting, but both leaders previously indicated that they are determined to work on resolving the issue.

The visit, Moscow hopes, will help to "create a constructive atmosphere in bilateral relations," Kremlin spokesman Dmitry Peskov said on Wednesday, but added that no immediate solution would likely be reached.

Lone Superpower? Washington's Allies are Getting Out of Control