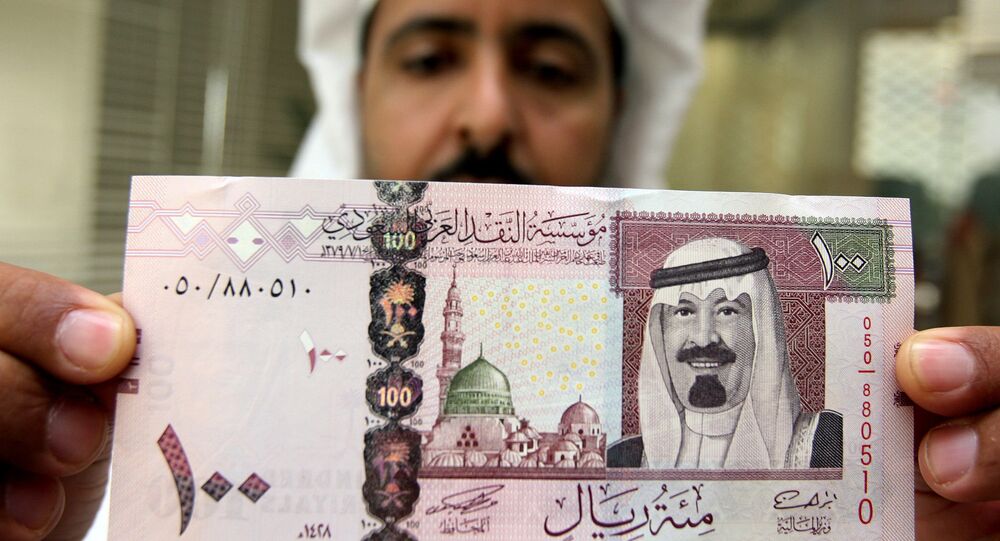 Running on Empty? Why Riyadh's Economy is in 'Dire Financial Straits'

Riyadh is in dire financial straits and there is no guarantee that the Gulf kingdom will be able to overcome the current difficulties; Deputy Crown Prince Mohammed bin Salman's prognosis that Saudi Arabia's economy will be diversified away from hydrocarbons by 2020 is nothing less than wishful thinking, Paul Cochrane wrote.

Clouds are gathering on Saudi Arabia's horizon; to complicate matters further, none of these clouds have a silver lining, according to Beirut-based journalist Paul Cochrane.

"The Kingdom of Saudi Arabia (KSA) is in dire financial straits. Since the plunge in oil prices, the kingdom has been hemorrhaging money left, right and center," Cochrane writes for CounterPunch.org.

© AP Photo / Hasan Jamali, File
The Calm Before the Coming Global Storm
The present situation has all the earmarks of an economic crisis: commercial banks have tightened lending to anyone outside of the government; thousands of Saudi workers have been laid off, while tens of thousands of foreign employees have been given the boot; as the government investment in the Saudi economy is drying up, the country is still unable to attract foreign direct investment.

"To try to mitigate such economic pressures, Riyadh is planning a Thatcherite sell-off of major government entities to drum up more cash. It is causing a lot of excitement and comment in the financial pages, as top of the pile is the plan to float an initial public offering (IPO) of up to 5 percent of Aramco, supposedly the world's largest oil producer and valued at some $2 trillion," Cochrane continues.

Furthermore, Deputy Crown Prince Mohammed bin Salman, the king's son, has announced an ambitious plan, entitled "Vision 2030." Prince Mohammed has even gone so far as to claim that the country's economy will be diversified from hydrocarbons — which account for 70 percent of government revenues and 90 percent of exports — by 2020.

"[2020 is] a curious date, as it is the same as the IMF [International Monetary Fund] have predicted the kingdom could be effectively bankrupt," the journalist remarks.

Indeed, the IMF's report released in October 2015 argued that given persistently low oil prices and Riyadh's spending spree Saudi Arabia may run out of money within five years.

"The problem is that [the Kingdom of Saudi Arabia] will not have diversified by then, or most probably by 2030. As one analyst put it, Mohammed bin Salman is 'pulling the wool over everyone's eyes' by implying the country can stay afloat without oil," Cochrane underscores, referring to the fact that Riyadh has talked about diversifying its economy for decades but with no tangible results.

© AP Photo / Hasan Jamali
Oil Crash and 'Beserk' Spending Left Saudi Arabia on Brink of Financial Ruin
At the same time there is a stumbling block in the way of Saudi Aramco privatization, and "transparency" is its name.

The truth of the matter is that Riyadh is most likely overstating its crude oil reserves. Citing a 2007 Aramco confidential cable, Cochrane underscores that Saudi Arabia overstated its hydrocarbon reserves by up to 40 percent.

"Given the nature of the country's oil reserves, and almost unlimited production for decades, it's possible the Saudis could simply be running out of gas," Butler stressed in his article for New Eastern Outlook.

© AFP 2020 / MARWAN NAAMAN
A flame from a Saudi Aramco (the national oil company) oil installation known as "Pump 3" burns brightly during sunset in the Saudi Arabian desert near the oil-rich area Al-Khurais, 160 kms east of the capital Riyadh

Interestingly enough, in 2012 Citigroup Inc. predicted that Saudi Arabia could become an oil importer by 2030.

However, Saudi Aramco's privatization project and the ambitious Vision 2030 plan are hanging in the balance. The key to these initiatives is Mohammed bin Salman.

© AFP 2020 / FAYEZ NURELDINE
Game of Thrones: Why Saudi Deputy Crown Prince Mohammad May Lose His Power
It is no secret that Prince Mohammed has annoyed his royal relatives, Cochrane notes.

"If Mohammed bin Salman falls from grace, what will happen with the Vision and privatization plans?" he asks.

According Karen Elliott House, a senior fellow at the Harvard Kennedy School of Government's Belfer Center for Science and International Affairs, there is no guarantee that Prince Mohammed would become the next king of Saudi Arabia.

In his article for The National Interest House drew attention to the fact that King Salman still hesitates to name his son his successor. According to the Saudi rules, Mohammad bin Nayef, King Salman's nephew is first in line to the throne of Saudi Arabia.

"As it stands now, it will all be hot air," Cochrane emphasizes.

"But trouble is undoutedly brewing as oil prices remain low, problems abound within the kingdom and the wider region, and by even the most optimistic outlook, diversification efforts will flounder," he concludes.