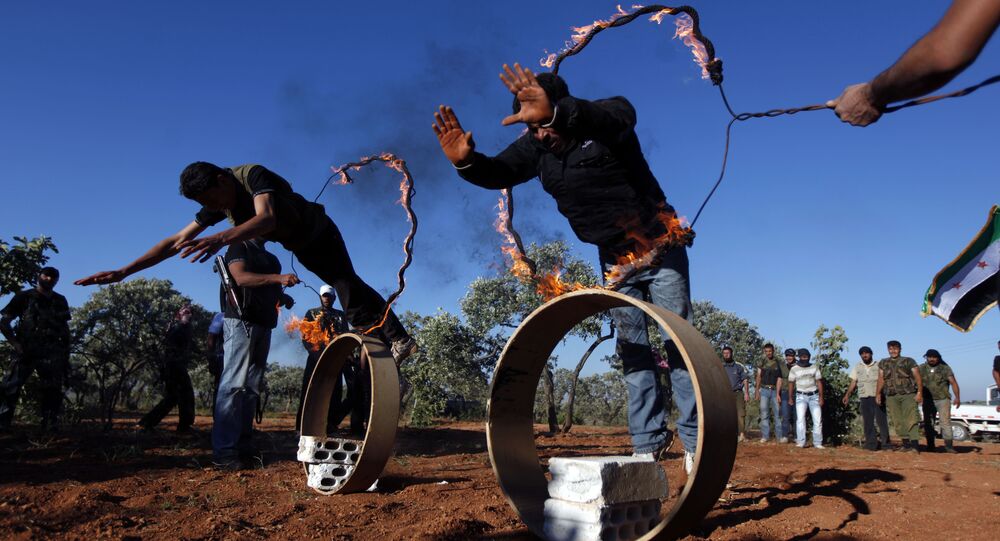 Choosing the Dark Side: Why US-Trained Fighters Defect to Extremists

While Washington is pouring billions of US taxpayer dollars into various training and arming programs in the Middle East and Central Asia, the US-backed fighters regularly defect to Islamists – Daesh, al-Qaeda, Taliban – taking their weapons and invaluable knowledge to "the dark side."

There is something fishy about the Pentagon and the CIA's military training programs in Syria and Afghanistan, freelance journalist and geopolitical analyst Martin Berger writes in his article for New Eastern Outlook.

The journalist draws attention to the fact that over the past decade Washington has invested nearly $70 billion taxpayer dollars to develop the Afghan security forces, also known as the Afghan National Defense and Security Forces (ANDSF).

However, that's half the story.

In his mid-April article Nick Paton Walsh of CNN reported that Afghan security force members are defecting to the Taliban to train terrorists.

"CNN met two deserters in Helmand whose stories show the breadth of the problem, who have taken their skills — months of US taxpayer-funded training — to the Taliban," Walsh wrote.

© AP Photo / Militant website via AP
Untold Story of Palmyra Battle: How NATO Paved the Way for Daesh Advance
It is not the first time the US-trained and armed fighters have defected taking the weapons provided by the US and invaluable military skills to "the other side."

Indeed, in late September 2015, Reuters reported that "the rebels surrendered six pick-up trucks and some ammunition, or about one-quarter of their issued equipment, to a suspected Nusra [al-Nusra Front] intermediary on September 21-22 in exchange for safe passage," citing Colonel Patrick Ryder, a spokesman for US Central Command.

Earlier, in March 2015 the International Business Times wrote that the CIA-backed Harakat Hazzm group in northern Syria joined al-Nusra Front and Daesh under the pretext that "the US failed to supply adequate resources."

"According to data obtained by IBTimes, the Hazzm movement received a total of about $6 million in 2014 from the US government — $500,000 a month for 5,000 soldiers," the media outlet elaborated.

In addition to these embarrassing cases, there are other episodes the Pentagon and the CIA can't be proud of.

© AFP 2020 / DIMITAR DILKOFF
Evidence Points to the CIA Targeting Assad, Not Daesh in Syria
For instance, the New York Times' November article entitled "New US-Backed Alliance to Counter ISIS in Syria Falters" narrated how Washington had made an effort to arm a newly created group of Arab fighters in northern Syria.

"American officials said 50 tons of ammunition had been airdropped for Arab fighters with the new group. But already, things have not always gone as planned. Since the ammunition airdrop, American officials have privately acknowledged that the Arab units it was intended for did not have the logistical capability to move it," the media outlet wrote.

Berger notes that it turned out in November 2015, that the Pentagon spent almost $384 million "on the preparation of 180 fighters, instead of the almost 3,000 militants it originally planned to train." In other words, the Pentagon spent $2 million per fighter trained.

© Sputnik
'Fair Game'? What Kerry's 'Absolute Lines' in Syria Really Mean
"The conclusion is pretty simple: over recent years Washington has started a large number of training programs in Syria, Afghanistan and other hot spots. Pentagon and CIA operatives have spent considerable amounts of taxpayers' money without ever achieving their stated objectives. Therefore, it won't be an exaggeration to state that those programs have become a gold mine for certain corrupted officers of the US armed and intelligence forces," Berger suggests.

"Some experts believe that the capture of those 'moderate opposition' fighters was a planned event, since those captured were able to pass their knowledge to the members of this terrorist organization at a time when Washington was unable to train them openly," he notes.

Whatever the truth is, the Pentagon and the CIA's programs aimed at arming and training American allies and proxies overseas have already become part of the problem, not the solution in the war-torn regions.

What Exactly is Washington Hiding in Classified 9/11 Commission Report?