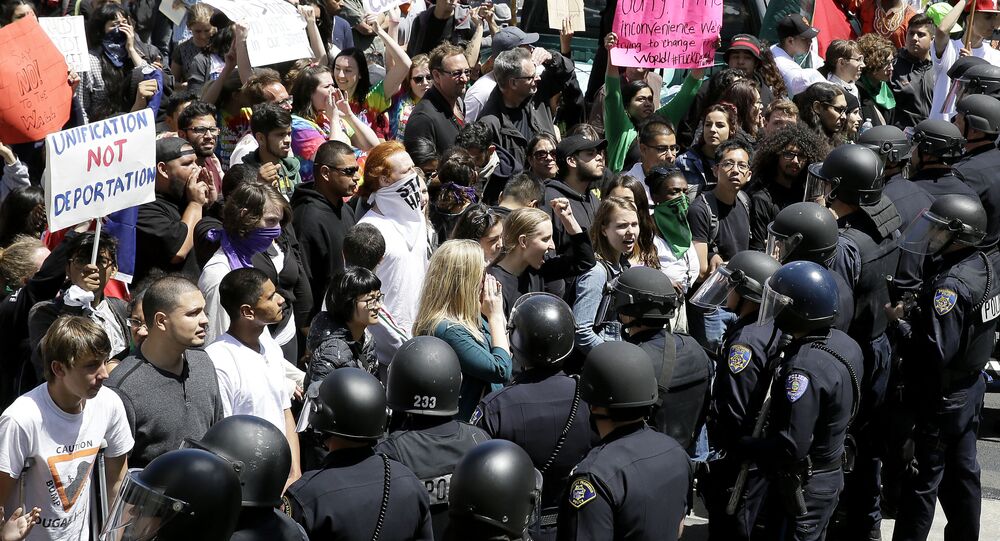 The controversial Republican front-runner was forced to take evasive action to enter a Hyatt Regency hotel to speak before the California Republican Convention.

On Friday, hundreds of protesters descended on the California Republican Convention in an effort to prevent frontrunner Donald Trump from speaking.

Protesters wearing bandanas over their faces and waving Mexican flags blocked the street access from the Hyatt Regency hotel, forcing the GOP front-runner’s motorcade to sneak along a concrete median outside the hotel’s back entrance. The candidate, bearing a bulletproof vest, was then swept into the building by the US Secret Service.

​"That was not the easiest entrance I’ve ever made," said the vaudevillian Republican in his speech at the convention, "it kinda felt like I was crossing the border."

Local police began swinging clubs at the protesters to drive them away, with several fist fights with protesters ensuing before a semblance of peace could be restored.

​The peace did not last long, however, as protesters made a violent second offensive, knocking down barriers and flooding toward the entrance outside the hotel. Police successfully prevented the second attempt to rush the facility as protesters screamed, "get him out," in reference to Trump.

California boasts the country’s largest Mexican population, with over 12 million people of Mexican heritage, or some 31% of the state’s population. Despite the state’s massive Latino population, the candidate who opened his campaign by referring to Mexican immigrants as "murderers and rapists" received 49% of Republican primary support in the last two polls of likely California Republican voters.

​One protester, Adrian Olivares, took particular exception to what he views as Trump’s hateful rhetoric. "I came out here to support my people and my father," said the 23-year-old college student draped in a Mexican flag. “I came here to display my country’s flag as loud as I can."

The young man’s father came to the United States from Mexico in the late 1980s. "My father is very successful and for Trump to come out and say we’re a bunch of racists, f##k him."

Despite being a symbol of racial intolerance in the eyes of most Latin-Americans, Trump often boasts that "the Hispanics love me, it’s true, because I’m going to bring jobs back, they love me." People of Mexican or South American heritage have not used the sobriquet 'Hispanics' to describe themselves in over a decade; most simply say 'Latinos.'

Twitter erupted during the protests, with anti-Trump haters and Trump apologists squaring off.

​Those who oppose Trump largely celebrated the protest as a successful act of civil disobedience, showing the Republican frontrunner that the public denounces his rhetoric and that he shouldn’t rely on California to propel him to the Republican nomination. However, others pointed out that hours of effort by hundreds of protesters to inconvenience Trump by a few minutes will likely not dent the billionaire candidate’s inexorable ascension.

​Those who support Trump pointed to acts that they felt proved the candidate’s point to call for greater border security and caution, especially regarding providing safe haven to Syrian refugees. They pointed to incidents of flag burning and bloodied Trump supporters to call into question the civility of the supposed peaceful protest.

​Still others questioned the legitimacy of the protests altogether, suggesting that a foreign provocateur, a man who has experience profiting by stoking the flames of civil unrest throughout the world may be to blame, suggesting that the mastermind behind the protests is none other than billionnaire financier George Soros, whose group MoveOn.org has routinely paid individuals to protest at Trump rallies.

​In the end, social media remained as divided as so-called 'democratic' America, where the voting population will get to choose who they dislike least between the two people that polls suggest are the most hated in America – Hillary Clinton and Donald Trump.

Trump Can Win Enough US Primaries to Get Republican Presidential Nomination