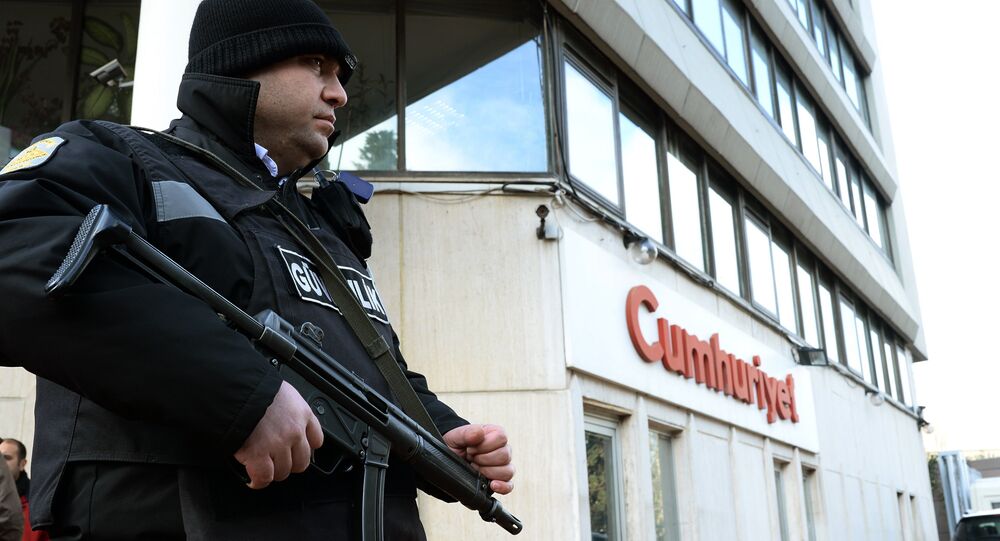 © AP Photo / Emrah Gurel
Turkish Court Sentences 2 Journalists for Using Charlie Hebdo Cartoons - Reports
MOSCOW (Sputnik) – Prison sentences against two Turkish journalists who published Charlie Hebdo cartoons is yet another "serious setback" for freedom of expression in the country, the Organization for Security and Co-operation in Europe’s (OSCE) Representative on Freedom of the Media Dunja Mijatovic said in a statement on Thursday.

“I am concerned by the fact that journalists can face imprisonment in Turkey for expressing their views and solidarity with the killed Charlie Hebdo cartoonists. Publishing materials that may offend a part of the society does not justify censorship, let alone imprisonment,” Mijatovic said.

The media freedom representative of the Organization for Security and Cooperation in Europe (OSCE) made her statement after an Istanbul court had sentenced two columnists of the Turkish opposition Cumhuriyet daily Ceyda Karan and Hikmet Cetinkaya to two years of imprisonment for inciting public hatred and insulting religious values.

© AP Photo / Emrah Gurel
Lawyer of Turkish Journalists Sentenced to Prison for 'Insulting Religious Values' Ready to Submit an Appeal
“Disagreeing with their editorial style can be expressed in many ways, but prison sentences should never be an option. I call on the authorities of Turkey to ensure the safety of the two journalists who have been exposed to severe threats and intimidations for their work,” Mijatovic said.

On January 14, 2015, Cumhuriyet was the only Turkish newspaper that published a four-page extract from the first Charlie Hebdo issue after deadly attacks on the magazine. The edition included two smaller versions of the controversial cartoon on Prophet Mohammed which was condemned by Prime Minister Ahmet Davutoglu as an “open provocation”.