Russia's Project 775 large landing ship, the Aleksandr Otrakovsky, has passed through the Bosphorus and the Dardanelles flying the Turkish flag, prompting Turkish experts to interpret the move as a sign that Moscow wants to improve relations with Ankara, the Milliyet newspaper asserted.

Ships fly so called courtesy flags in foreign waters as a token of respect. Russian ships have always adhered to this rule, retired Admiral Igor Kasatonov, who served as the commander of the Black Sea Fleet, told the Rossiyskaya Gazeta newspaper in December after the Saratov landing ship did not display the Turkish flag while crossing the straits.

© Sputnik / Vitaliy Ankov
The Varyag guided missile cruiser, one of the Pacific Fleet vessels heading for maneuvers in the Indian Ocean, seen in the Eastern Bosphorus Strait

Geostrategic analyst Nejat Tarakçı referred to the Aleksandr Otrakovsky's decision to fly the Turkish flag as a positive development.

"When military vessels pass through Turkey's territorial waters or enter Turkish ports, they are not obligated to fly the flag of the host country," he explained. This move, if intentional, could then be interpreted as "a gesture of friendship."

© REUTERS / Murad Sezer
The Russian Navy's landing ship Alexander Otrakovsky sails in the Bosphorus, on its way to the Mediterranean Sea, in Istanbul, Turkey February 18, 2016

Retired Сapt. 1st Rank İsmet Hergünşen shared the sentiment, saying that the decision could be viewed as a sign that relations between Russia and Turkey are warming up. He added that the courtesy flag could not have been displayed without the captain knowing about it. 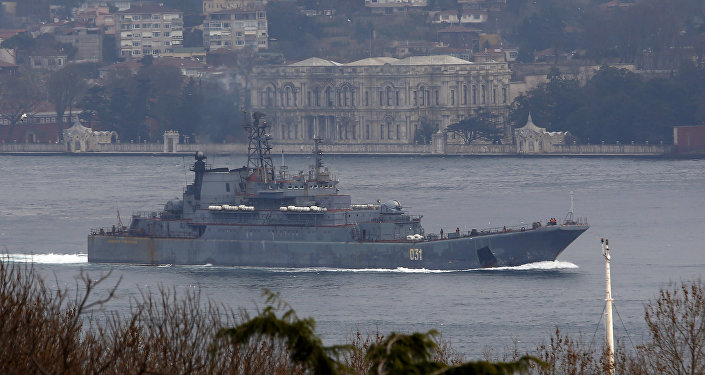 © REUTERS / Murad Sezer
Russia's Route to the Middle East 'Runs Straight Through Istanbul'
Earlier in April, the Izvestiya newspaper reported that Turkey drastically increased security measures in the Bosporus and the Dardanelles. As a result, patrol boats and helicopters were assigned to escorting Russian warships crossing the straits.

For instance, as many as four boats and a helicopter escorted the Minsk large landing ship when it transited through the Bosphorus and the Dardanelles, the media outlet detailed. In March, the Novocherkassk ship was escorted by two patrol boats, a coastal patrol ship and a police helicopter, the Kommersant newspaper reported, citing Turkish media.

Russian-Turkish Relations Are Of Major Importnace to Ankara

Turkey Will Not Be Happy With This Greek Offer to Russia