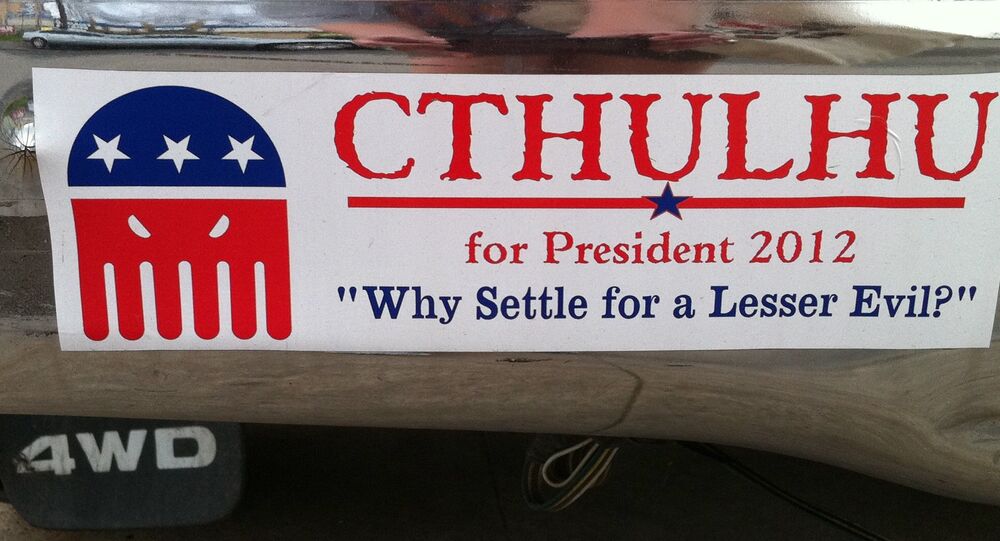 No Lives Matter: Cthulhu Campaign is Up for Bold Moves

As the US presidential candidates wage a relentless war for the nomination, Radio Sputnik speaks with a representative of the Cthulhu campaign, an independent candidate determined to sow chaos on earth more quickly and efficiently than any of his rivals.

Named for the terrifying creature made famous by H.P. Lovecraft, Cthulhu is running on a "Why settle for the lesser evil?" platform.

Asked about why the campaign believes the US must be governed by such a terrifying candidate, Christopher Rosso, director of communications for the Cthulhu campaign, explained that both human front-running candidates, Hillary Clinton and Donald Trump "offer only half of the evil that people are looking for."

The campaign believes that, offered with a "full-evil package, the Americans will go straight for that."

© Flickr / Kristina Alexanderson
Coming to the Dark Side? Poroshenko to Consider Lord Vader for Ukraine’s PM

"[In terms of military action] Hillary will just create more Syrias or more Libyas. Trump is more isolationist, though. And Cthulhu believes that, controlling the largest military in the world, we might as well use it and take over the planet."

Defending the campaign against false allegations of being backed by certain reptilian groups, Rosso argued that Reptilians are a mere urban myth.

"The Lizard people lived in the pre-human times, but they are mostly extinct."

On the contrary, Cthulhu's cult, according to Rosso, "has been active for thousands of years."

According to the campaign's website, the candidate seeks to end "the exploitation of humanity by the 1% by providing full-time employment for everyone," ensure global security by taking over any other country that has "anything worth taking," and care for perfect climate by "continuing the work, as all prior presidents have, of increasing global temperatures."

These Sailors Have Just Awakened Cthulhu