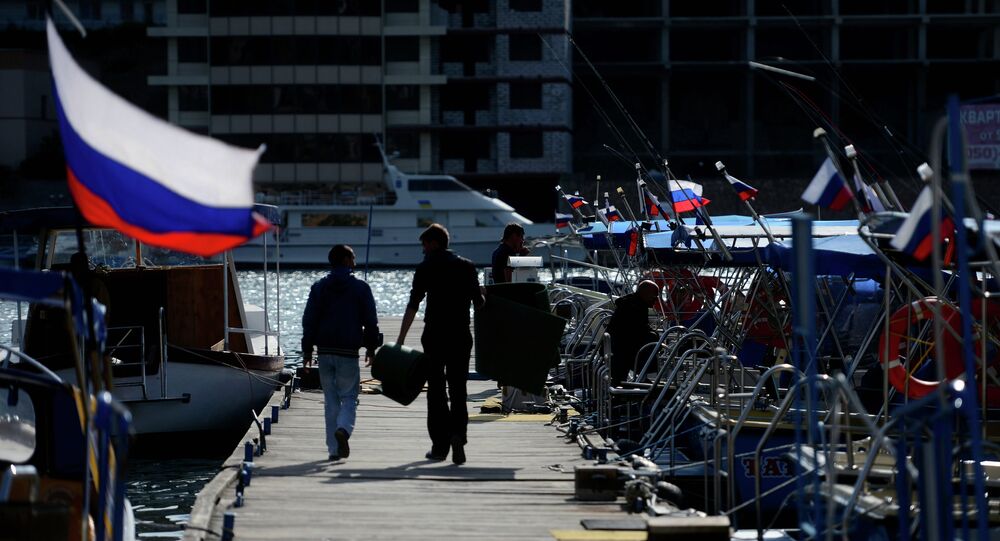 Crimea will stay as part of Russia for a long time to come, the negotiations for its "return" can never even begin and the re-integration of Donbass with Ukraine could be stalled for decades – these are predictions of Lauren Goodrich, a senior Eurasia analyst and Soviet Union specialist at Stratfor.

© Sputnik / Vitaliy Belousov
Stratfor: Political Infighting in Ukraine Could Resume Despite Leadership Change
"I don’t think that anybody on the part of Russia, Europe or the US thinks that there will be any developments or even negotiations on Crimea," Lauren Goodrich said in an interview with the Ukrainian website Apostrophe.

"It appears that Crimea will stay in Russia’s hands for a long time. Russia won’t even negotiate this topic. For Moscow, it is not just an instrument to exert influence on Ukraine, it is almost a national issue for Russia," she added.

The analyst noted that any negotiations on the issue will discredit Russia’s national security and Moscow will not go down this path. The Russian people will not understand it, so the negotiations "can never even begin."

Goodrich said that the Kremlin had used Crimea for "consolidation of the Russian people and its nationalism." To return the peninsula, Ukraine will need "the fall of the Russian regime" and not just Vladimir Putin.

For the above to happen, Russia should transform into "a country that it has not yet been."

© AFP 2021 / ALAIN JOCARD
Sensing Defeat: Kiev Pressures Brussels for Its Vendetta Against Moscow
With regards to the tensions between Ukraine's southeastern regions and Kiev, the analyst suggested that it is turning into a frozen conflict, similar to those of Nagorno-Karabakh and South Ossetia and its reintegration with Ukraine could be stalled for decades.

Goodrich ruled out any possible lethal weapons supplies to Ukraine from any major European power or the US as they "have dialogue with Russia on many issues besides Ukraine," and don't want to cross the "red line."

Kiev should not count on continued diplomatic support: according to the analyst, the EU may cancel the anti-Russian sanctions without the return of Ukrainian control over Donbass. For this to happen, at least one European country has to come out in opposition to the sanctions.

"An interesting point in this story is that an extension of the sanctions needs the unanimous support of all countries in the European Union. If it does not have that, then the validity of restrictive measures will simply expire."

© REUTERS / Valentyn Ogirenko
Boosting Military Capabilities Top Priority for Ukraine's New Gov't
The analyst however noted that the US is not going to give up the sanctions, and is exerting "huge pressure" on the EU, so at the moment none of the countries of the EU is ready to oppose the sanctions. At the same time, she admits that in the next few months, anything could change.

She also suggested that if the conflict with Donbass remains stalled for a long time, the EU could eventually come to accept it, and even agree to lift their sanctions without insisting on the re-integration.

As for the Western sanctions imposed in connection with the reunification of Crimea with Russia, the analyst noted that they are much different from the restrictive measures relating to Donbass.

"I think that even Russia understands that the sanctions related to Crimea are unlikely to ever be lifted. And they're willing to accept it, because the impact of these restrictive measures is very insignificant."

Why Does Ukraine Need the Crimea?