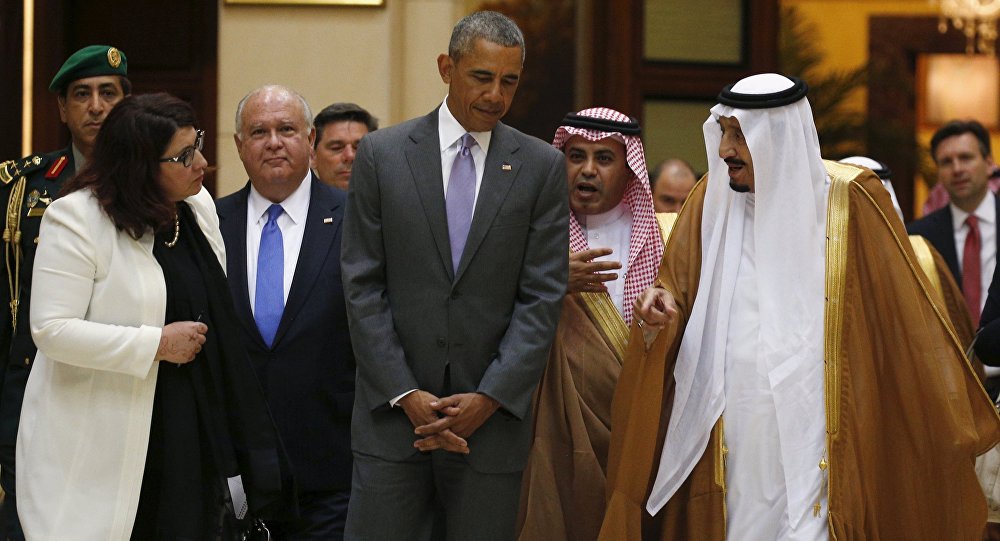 How the Obama Administration has handled Syria, Iran and Afghanistan, as well as news that a bill that could see Saudis sued in US courts, has turned the House of Saud away from Washington. Those tensions will not diminish in the near term, political analyst Dr. Alon Ben-Meir told Radio Sputnik.

Saudis “have lost some of their confidence in the ability of the United States to come to their aid,” Ben-Meir, Senior Fellow at the World Policy Institute, said in regard to the decline in relations between the two nations.

Riyadh was particularly displeased with Obama making it clear that “Iran is a fact of life” and a “major power,” with which Saudis must “share their neighborhood.” Ben-Meir stressed that the standoff between the two Middle East countries could only be “mitigated by peaceful means.”

© AP Photo / Carolyn Kaster
Blackmailed? Obama Enjoys Saudi King’s ‘Hospitality’ Amid New 9/11 Proof
“Sunni-Shia conflict is something that has been in the Muslim world for millennia,” Ben-Meir said. “Saudis and Iranians should be sitting down and working together. Because this war is not winnable by either side.”

The necessity for peace talks must be translated to the conflict in Yemen first, according to the analyst, as both Riyadh and Tehran are “playing the role and are engaged in the proxy war” in the embattled country.

“They need to understand that they both have roles to play and they can neither exclude one another from playing this role,” he stressed. “The role of the US is to emphasize the importance of Iran and Saudi Arabia working together.”

© REUTERS / Jacquelyn Martin/Pool
Riyadh's Blackmail: Is Washington Afraid of Saudi Threats to Dump Dollar?
Ben-Meir suggests that the US can do nothing to stop continuing violence in the Middle East, aside from fomenting peace negotiations.

Regarding US legislation allowing for the Saudis to be sued in US courts for their complicity in the 9/11 attacks, Ben-Meir believes that this is a trick to distract Americans focused on the ongoing presidential elections.

In Ben-Meir’s view, this move is “not going to translate into something significant, given the environment in which we are specifically at the moment,” adding that this particular issue with the Saudis will be allayed. “But they are also interested in what the future president is going to do.”

Will 9/11 Victims Soon Be Able to Sue Saudi Arabia?