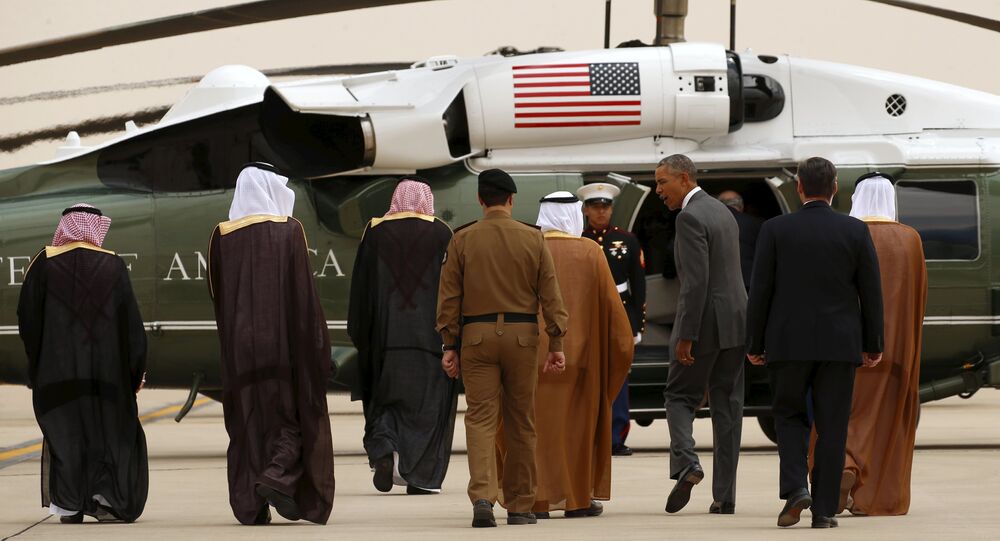 During Barack Obama’s visit to Saudi Arabia, it has become clear just how much the US government has upset their Saudi allies.

© AP Photo / Carolyn Kaster
9/11 Law: Is the US Putting the Saudis Before Its Own Citizens?
Obama came to Riyadh hoping to discuss how the United States and Saudi Arabia could confront the issues of terrorism and regional instability in the Middle East.

When Obama stepped off the plane in Riyadh's airport, he had a chilly welcome. Saudi King Salman was not present at the airport to greet Obama personally, instead sending a lower-ranking royal to greet the president. Interestingly, when top officials from other Gulf nations arrived at Riyadh earlier, the Saudi king was shown on local TV personally greeting them at the airport.

According to security analyst Mustafa Alani from the Gulf Research Center, the Saudi king's decision not to personally greet the US president was very unusual and a clear message that Riyadh doesn't trust Obama.

"He will find a leadership that's not ready to believe him," Alani said, as cited by AP. "The Saudis had disagreements with previous presidents. Here you have deep distrust that the president won't deliver anything."

Saudi officials are upset by Obama's recent words that instead of constantly sparring against each other, Saudi Arabia and Iran should "share the neighborhood," AP reported.

© AFP 2021 / OLYA MORVAN
My Way or the Highway: Saudis Refuse to Work With Others, Blame Russia and Iran for Low Oil Prices
Since Saudi Arabia considers Iran its main rival in the Middle East, it became visibly upset after the US government worked with others to solve Iran's long-standing issue with its nuclear program last year, which led to the removal of sanctions against Iran.

Furthermore, ahead of Obama's visit, a group of US politicians urged the president to put pressure on Riyadh and make the Saudis improve their poor human rights record. By April 1, the Saudi government had already executed 82 people and, according to the Independent, Riyadh is aiming to double the number of executions (158) it carried out last year.

After Saudi Arabia, Obama is scheduled to visit Britain and Germany.

Guess Who? US Lawmaker Joins Pro-Saudi Chorus Against 9/11 Families