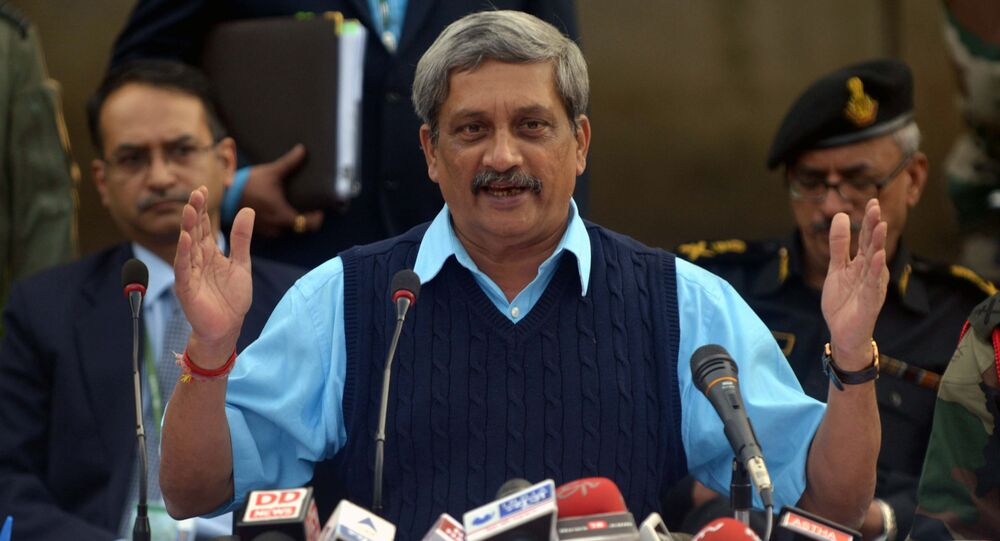 Indian Defense Minister on a 'Ping-Pong Diplomacy' Mission to China

Indian Defense Minister Manohar Parrikar is in China for a goodwill visit to keep a lid on the simmering cold war between the two neighboring countries.

New Delhi (Sputnik) — Indian Defense Minister Manohar Parrikar's maiden visit to China is very crucial at this juncture when the gulf between India and China is widening. Although both countries are increasing their economic partnership, on the strategic front India and China are poles apart as they are competing against each other in the Indian Ocean region, South China Sea, South Asia and Africa.

Moreover, India's growing relations with the US and its allies on one hand and Chinese alignment with Pakistan and its aggressive diplomacy in the Indian Ocean region on other hand, has put pressure on Sino-Indian relations.

© AFP 2021 / RAVEENDRAN
India Addresses China Over Imposing UN Sanctions on Kashmir Militant
On the first day of his four day visit to China, Manohar Parrikar held talks with his Chinese counterpart Gen. Chang Wanquan. In his opening remarks Parrikar said that "India attaches highest priority to relations with China and is committed to further developing friendly and cooperative relations with China." During the discussion with his Chinese counterpart Manohar Parrikar discussed a whole gamut of bilateral issues between the two countries. Both the leaders also reviewed the progress made in defense relations.

During his subsequent meetings with Gen. Chang and other top officials of the Chinese army and with Chinese Prime Minister Li Keqiang, the Indian Defense Minister will raise other issues of concern. According to Defense sources, his core motive is to engage China and have more robust defense cooperation especially in terms of military to military exchanges. He will also attempt to ward off Chinese apprehensions on US-India military cooperation and India's position on the South China Sea.

© Flickr / Sweetie187
United in Space: China, India Pave the Way to BRICS Cooperation in Space
Defense officials, who did not wish to be named, mentioned that first of all Manohar Parrikar will raise the issue of aggressive patrolling by the Chinese army in the Ladakh sector. India will stress that, as agreed between the two countries, peace and tranquility along the border is a prerequisite for the cordial relations between India and China. Thus, frequent transgressions along the border are a deterrent to peace and tranquility along the border and it will also impact bilateral economic and political relations in the long run. India will stress that until the border problem is finalized, both sides should maintain the status quo.

Secondly, the Indian Defense Minister will raise the issue of Masood Azhar as China has blocked India's bid to designate Pakistan-based terrorist organization Jaish-e-Mohammed and its chief Masood Azhar as a terrorist by the UN. The Indian Defense Minister will try his best to convince the Chinese side that the source of terrorism is the same for both the countries and hence it will be better for them to fight the menace of terrorism jointly. India will also convince and convey to Chinese leadership that the Afghanistan-Pakistan region is the source of terrorism and there are several terrorist organizations which operate from Pakistani soil to carry out terrorist activities in the neighboring countries.

© Sputnik / Alexey Kudenko
China, India to Lead Spike in Demand for Natural Gas in Asia - IEA Director
India will also raise the issue of the presence of Chinese troops along the Line of Control (LoC) in the Pakistan Occupied Kashmir (PoK). India has deep security concerns about the presence of Chinese PLA along the LoC in PoK. So India would like to have assurances from the Chinese side that the PLA will cease to proceed in these areas as it will undermine the security and stability of the region.

With this visit, the Indian Defense Minister will try to realign the Sino-Indian relationship with renewed engagement and cooperation.

Hundreds of Chinese Companies Join 'Made in India' Program