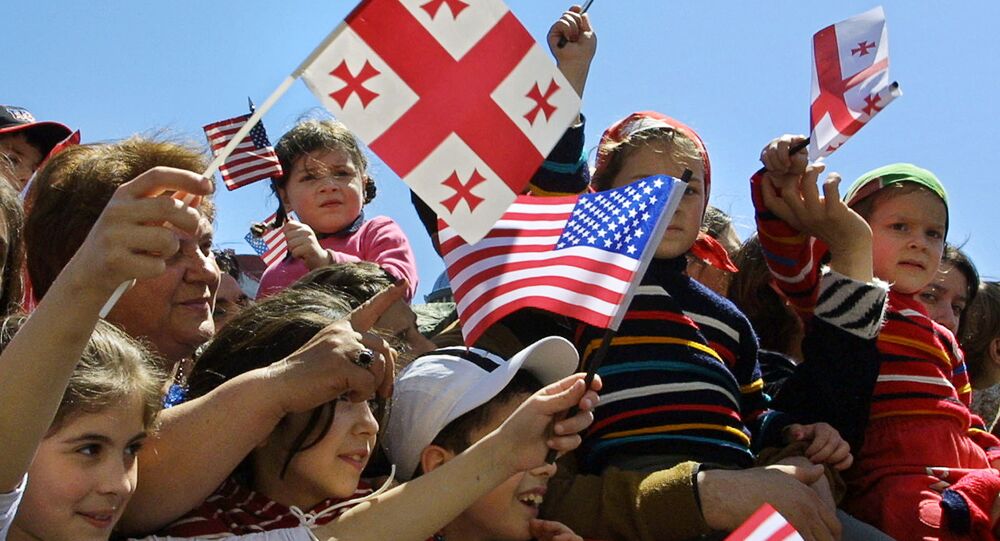 American political scientist Phil Butler digs into the details of how George Soros' Open Society Foundations have permeated, or as he puts it, 'infected', the nations of the former Soviet Union from the Baltics to the Caucasus.

Studying the machinations of 'democracy promotion' activist billionaire magnate George Soros in a pair of articles for New Eastern Outlook, Butler offers a detailed account of how Soros' "American brand of Lebensraum" has worked to conquer the hearts and minds of political and intellectual elites, and those of ordinary people, across the former Soviet space.

Latvia: An Experiment in Social Manipulation

The small Baltic nation of Latvia, the analyst recalls, was one of the first nations in Eastern Europe to become entangled in the web spun by Soros and his allies, becoming "a sort of 'conversion' template, a kind of Soros new world order experiment." Established in 1992, immediately after the collapse of the USSR, Soros Foundation Latvia soon came to have enormous reach in virtually every sphere of education, law, and society.

© Flickr / Insider Monkey
George Soros’ Anti-Kremlin Information Laundering Backfires on Clinton, Cameron
"It was at this time [that] George Soros began funding academia down to the grade school level. Then in 1994 Soros initiatives engaged students at Latvian universities with enticements like study abroad, and later the grant system of 'encouragements' for students." Other initiatives included the publication of philosophical works and textbooks, and even funding for the arts, via the Soros Center for Contemporary Arts.

"In 1995, Soros' money was injected to influence Latvia's judicial system, through the creation of the Latvian Judicial Training Center. This was a crucial bit of strategy, [with] Soros linking the American Bar Association with a fledgling nation's academic progress toward the rule of law. At the same time Soros funding helped established an NGO Center, where government employees could receive language training for free." In 1998, Soros stood behind the creation of the Riga Graduate School of Law.

Ultimately, Butler argues, the implications of Soros' injection of cash to influence thought, language and law of the young country and its fledgling elites would prove staggering, even if it was (and is) coolly written off as "philanthropy."

"From 1990 to 2002, Soros [would endeavor] to engage in every sphere of Latvian society, form law and ethics, to the disabled and the arts. Then, in 2003, the Soros Foundation co-create[d] the Center for Public Policy PROVIDUS."

"This initiative," the political scientist explained, like "many others undertaken by Soros, is now supported by the European Commission, Latvia's Ministry of Education and Science, and corporate altruism such as that we see from the Robert Bosch Stiftung foundation."

The importance of the PROVIDUS effort," Butler notes, lies in its creation of "a transformative path, one where hundreds of NGOs, corporate and government agencies now tread" to influence the affected country's educational, legal, and social institutions.

© Sputnik / Michael Klimentyev
Putin Identifies Continuing Grip of Neocon-Liberal Militarists Running US Policy
Ultimately, Butler notes, "the pattern set here went forward, the successes in transformative societal manipulation have now been cloned, and this is why we see Soros and other NWO elites so transparently."

In 2005, the Soros Foundation would launch the 'Wider Europe' program, "where Belarus, Ukraine, Moldova and Georgia were targeted as 'partners' to the greater EU community." Essentially, Butler suggests, the educational, legal, political and other initiatives which this program spawned actually ended up mirroring, and even facilitating, Washington's foreign policy toward Russia and the rest of Eastern Europe and the former Soviet space.

In the case of the Caucasian nation of Georgia, Butler writes, similar processes can be observed. In fact, he suggests, "in Georgia, as in Latvia, the effort to bring Soros' brand of democracy to Georgians reaches the level of being diabolical," with Soros' initiatives actively involved in what is called a "dynamic conversion of key individuals, using the same strategies that make hedge funds profitable."

© Sputnik / Andrey Stenin
Ukrainian Coup 'Interim Step for Toppling Putin' - Former CIA Analyst
"In short, Open Society Foundations 'invests' money and other resources in order to achieve a desired gain. This gain is often seen in mid to short term revenues, but it is also visible in broad strokes, where NATO, CIA, US State Department and White House interests coincide."

Open Society Georgia, Butler points out, has gone above and beyond, thinking up new innovations in the field of manipulation. "A new call for think tanks to take part in something called the 'Think Tank Young Professional Development Program for MA and PhD Graduates' is but one of many advertisements for Soros advocates. Make no mistake, this most recent call is one of the [boldest] initiatives Soros and the NWO have undertaken."

This program, Butler explains, factually serves as little more than "a recruitment advertisement to form new battalions of centurions for policymaking. As was the case in Latvia, Open Society Foundations disseminates the ideals, strategies and initiatives of new societies via investments at every level."

"The strategy is brilliant, if simple. Soros invests a few million, other NGOs, governments and corporations join in, and the end product – the return, is a nation of Soros-citizens [who are] ready to be served some democracy." This particular graduate grant, "like most others, pays academics to study the 'agenda', and in the end to profess the 'findings' to policymakers and the public, not to mention future students."

At the same time, in Georgia and elsewhere, Open Society Foundations have engaged in funding intra-national IMF, World Bank and EU policy influencing mechanisms, factually (and dangerously) giving them the power to "forge the economic policies of Georgia and other former soviet republics."

© AFP 2021 / ABDULLAH DOMA
Long Live the King: Why Restoration of Monarchy in Libya Suits West's Needs
In Georgia specifically, Butler recalled, Soros Foundations and Soros himself have made no attempt to shy away from the 2003 Rose Revolution (a color revolution which resulted in the coming to power of now disgraced former president Mikheil Saakashvili). Soros and allied forces, including USAID, the Eurasia Foundation, and the Friedrich Ebert Foundation actively funded the Kmara student movement (which received training in Serbia following the successful 'Buldozer Revolution' there), Saakashvili's National Movement Party, and other opposition groups, as well as the television station Rustavi-2, which would become crucial to overthrowing the old government.

Following their victory, the political scientist notes, these same Western institutions have only strengthened and expanded their influence on policy elites and policymaking in the country, even after Saakashvili's own resignation.

Ultimately, Butler writes, the breadth of Western foundations, corporations and Western governments' influence on Eastern European governments and societies is nothing short of staggering. Using 32 'independent policy centers' in 21 countries, "Soros seed money has [now] metastasized into a cancerous mechanism supported by everyone from mayors to lawyers to whole parliaments."

"The new world order," he warns, "is not some mythical apparition that conspiracy theorists harp about; it is a reality that has supplanted democracy. Soros and his associates have removed the public's capacity to understand reality, and replaced it with another truth."

© REUTERS / Carlos Jasso
The Usual Suspects: Panama Papers Scandal Funded by USAID, Soros
Worst of all, Butler says, the young people, citizens and policymakers who are influenced and manipulated by Soros and others serving to facilitate American and European crypto-imperial policy usually do not even realize what is being done to them. Ultimately, hiding behind philosopher Karl Popper's concept of the 'open society', Soros and his allies actually have nothing in common with Popper's beautiful ideal.

"Soros and his comrades, wherever they are, are less interested in any new world, than with the fortification and growth of the old one, the elitist one. They use humanity's tribal nature on the one hand, while professing true liberal democracy on the other."

"The Open Society Foundations, created by George Soros, are supposedly inspired in name and purpose by Popper's book. But in reality the new world order only mystifies us with sleight of hand and magic, while stealing humanity's birthright. In this crucible of power," places like Latvia and Georgia "become the ideological Lebensraum, necessary for the survival of tyrannical ideas."