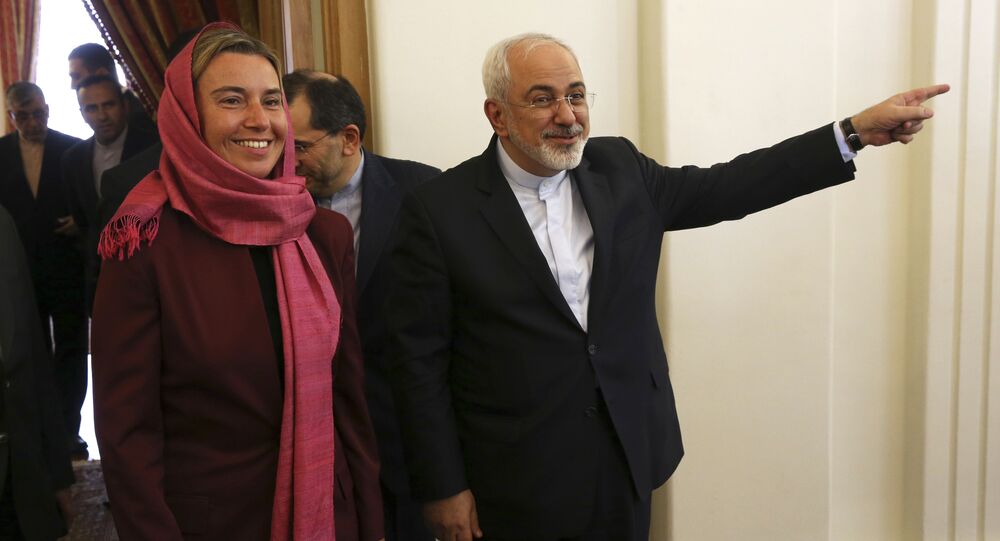 Javad Zarif: Iran and EU Will Press US on Access to Global Financial System

Iran, aiming to secure better terms from the United States following last year's nuclear deal, is cooperating with the European Union to put pressure on Washington to let it into the global banking system.

© AFP 2021 / HANS PUNZ
EU, Iran Regard Each Other As Partners to Boost Mutual Cooperation
One of the Iran's goals in nuclear deal with world powers was to secure the country's access to the global financial system, and the United States must now act to remove obstacles to the banking sector, Foreign Minister Mohammad Javad Zarif said on Saturday.

"It's essential that the other side, especially the United States, fulfill its commitments not on paper but in practice and removes the obstacles especially in banking sector," he said.

In their joint briefing with High Representative of the Union for Foreign Affairs and Security Policy Federica Mogherini the sides underscored that the EU and Iran were in agreement on the expansion of economic relations, and "encouraging banking cooperation".

"It is in the European interest and in the Iranian interest to make sure that banks engage and feel confident to come to Iran and facilitate and support this new economic engagement," said Federica Mogherini, who came to Tehran with a team of seven commissioners for a one-day visit.

Despite the recent nuclear agreement, some US sanctions remain and US banks remain prohibited from doing business with Iran directly or indirectly on allegations of supporting terrorism and human rights violations. Some European banks like France bank BNP Paribas or Germany's Commerzbank AG, who tried to establish connections with Iran, were severely fined by US, and they still fear repercussions of the many other restrictions imposed by Washington that remain in force.

In January, world powers led by the United States and the European Union lifted most sanctions on Iran in return for limits on its nuclear program. The White House said on Friday that this agreement did not include giving it access to the global financial system.