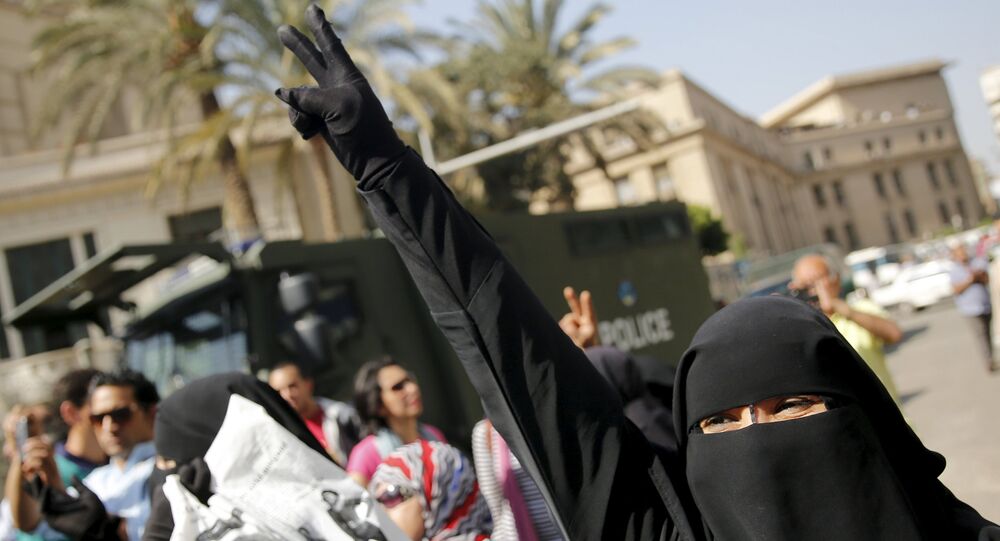 There are certain links between the Muslim Brotherhood, a transnational Sunni Islamist organization, and Daesh (ISIS/ISIL), according to Egyptian journalist Eman Nabih; the journalist nails Washington for its irresponsible backing of Muslim Brothers.

© REUTERS / VTM
Unspoken Story of Europe's Islamization: Who's Behind the Terror Upsurge?
The Muslim Brotherhood was founded in 1928 in Egypt and has earned a bad reputation for its terrorist attacks, political assassinations and regime change attempts in the Middle East.

The Brotherhood allegedly collaborated with the Nazis in the 1940s and then cooperatied with the US intelligence services in the late 1970s-1980s, when jihadists flooded Afghanistan in order to fight against Soviet military forces and the secular government in Kabul.

According to Egyptian journalist and social media expert Eman Nabih, the Muslim Brotherhood's covert activity in the Middle East and North Africa has led to a series of military coups in the Arab world in 2011-2012 and the emergence of Daesh.

"The Muslim Brotherhood is the parent of all terrorist groups, including ISIS (Daesh). Hassan al-Banna, founder of the Muslim Brotherhood, sought to restore a worldwide Islamic Caliphate…  Under al-Banna's stewardship, the Brotherhood developed a network of underground cells, stole weapons, trained fighters, formed secret assassination squads, founded sleeper cells of subversive supporters in the ranks of the army and police, and waited for the order to go public with terrorism, assassinations, and suicide missions," the journalist writes in her article for Voltairenet.org, adding that the group has a long record of collaboration with Islamic extremists and fascist regimes.

© AP Photo / Khalil Hamra
'Moderate' Islamism? Washington, Brussels Playing With Fire in Syria, Iraq
In one of his interviews with Sputnik, Syrian expert Ghassan Kadi narrated that since 1928 the Muslim Brotherhood has beefed up its presence in the Levant, including in Syria and Lebanon, and beyond.

"The ideologies of the MB [Muslim Brotherhood] and Al-Qaeda are identical. In this same basket, you can include the Wahhabis, the Salafis, and all other Islamist groups," Kadi told Sputnik.

According to Nabih, there is enough evidence of certain links between the Muslim Brotherhood and Daesh terrorists. She cites a wide range of Arab sources to illustrate her point.

© AFP 2020 / AMC / FADI AL-HALABI
An Uncomfortable Truth: Washington Caught Supporting Jihadists in Syria
For instance, the Egyptian journalist refers to Al-Bawaba's 2016 report that exposed the names of 30 Muslim Brothers who had joined Daesh and al-Qaeda terrorist camps in Eastern Libya and were trained to carry out suicide attacks in Egypt.

The journalist continues that in August 2014, the Egyptian National Security busted the Muslim Brotherhood terrorist cell, formed of three groups. Nabih calls attention to the fact that the groups pledged their loyalty to Daesh and its leadership.

Citing Arab media sources, the journalist points out that the Brotherhood is also involved in creating paramilitary youth organizations in Egypt.

Nabih expresses her concerns regarding the fact that Washington hesitates to designate the Muslim Brotherhood as a terrorist organization and continues to use it as a "weapon" against President Bashar al-Assad in Syria.

Indeed, a 2012 Defense Intelligence Agency (DIA) report indicated that the Muslim Brotherhood, al-Qaeda and other Salafist groups were the major driving forces of the Syrian insurgency. To complicate matters further, Michael Flynn, former head of the US DIA, noted in his 2015 interview with Al Jazeera that it was a "willful decision" of Washington to support radical Islamists in Syria to topple Assad.

Interestingly enough, the Brooking Institution's working paper released in August 2015 names the Muslim Brotherhood "an important component of the Western-backed Syrian opposition." The paper states that the Brotherhood has "the political experience needed to navigate the complex politics of the Syrian opposition."

Remarkably, in November 2015 Republican Senator Ted Cruz introduced a bill aimed at designating the Muslim Brotherhood as a terrorist organization.

The bill quotes the Muslim Brotherhood's founder and leader Hassan al-Banna, who wrote in his book entitled 'The Way of Jihad':

"Jihad is an obligation from Allah on every Muslim and cannot be ignored nor evaded…  Jihad [means] the fighting of the unbelievers, and involves all possible efforts that are necessary to dismantle the power of the enemies of Islam including beating them, plundering their wealth, destroying their places of worship and smashing their idols."

However, despite the fact that the Muslim Brotherhood is regarded as an extremist entity in many countries, including Arab states, neither the United States, nor the European Union have labeled it as a foreign terrorist organization yet. Surprisingly, the Muslim Brotherhood maintains a great presence in Europe.

"Terrorism doesn't admit countries or borders, terrorism has no home, no religion, terrorism is the enemy of humanity and when they start to attack, they bite the hand that fed them," Nabih warns.