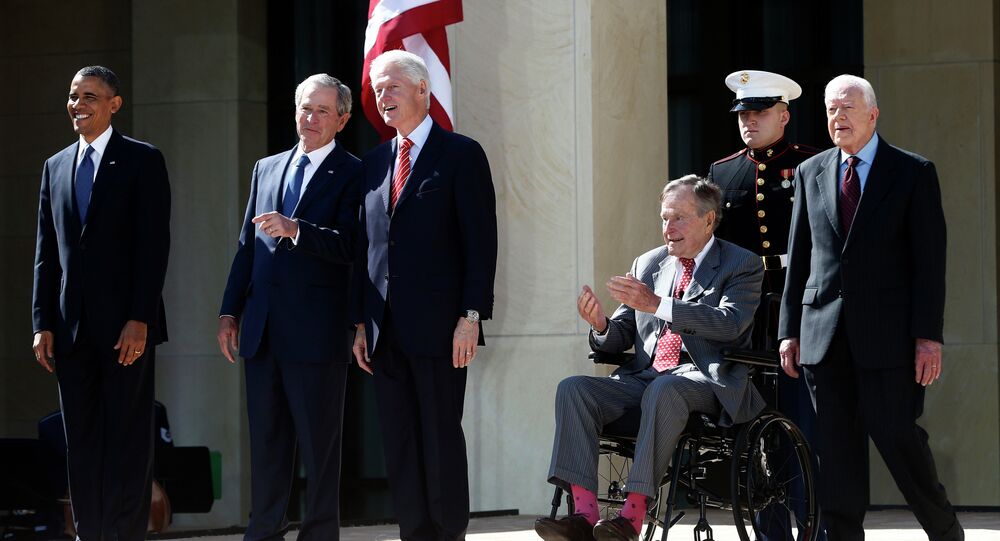 Putin Right on Role of Clinton-Bush Dynasties Dominating US Politics

Russian President Vladimir Putin was accurate in his assessment of the durability of the political establishment in the United States, but sometimes the advantages of wealth and dynasty can backfire, former European Union adviser Paolo von Schirach told Sputnik.

WASHINGTON (Sputnik) — In his annual nationally televised question and answer broadcast with the Russian people on Thursday, Putin expressed his doubts about the possibility of removing power from established circles in the United States, citing the Bush and Clinton political dynasties as examples.

"Yes, it is true that in America politics has become a ‘family business’, in at least some instances. Of course the Bush and Clinton ‘dynasties’ seem to prove Putin’s point," Schirach, president of the Global Policy Institute and a professor of international relations at BAU University, said on Friday.

However, Schirach noted that the current US presidential election campaign had also exposed unanticipated limits to the effectiveness of financial and dynastic influence in retaining or renewing political power.

"Notwithstanding formidable financial backing coming from old friends of his family, former Florida Governor Jeb Bush failed miserably in his attempt to gain the Republican nomination, mostly because Republican voters did not want to have ‘another Bush’ leading their party."

Jeb Bush had anticipated a possible popular reaction against his family and had thought he could overcome it by repackaging himself as an independent figure, but his effort failed completely, Schirach noted.

"The former governor tried to deflect this objection by presenting himself to the voters as ‘Jeb,’ and not as another Bush. But, it did not work. The family legacy proved to be a huge obstacle."

However, Schirach acknowledged that Bush’s failure had not ended the dynastic influence in US national politics.

Hillary Clinton, former two-term first lady and secretary of state, "most likely will be the Democratic Party nominee, with very good chances to be elected President," he admitted.

But even Clinton, who had anticipated a smooth "coronation" to the Democratic presidential nomination, still faced two uphill battles, first for the nomination against Senator Bernie Sanders, and then to win the national election in November, Schirach predicted.

"As several opinion polls show, a majority of Americans do not like her, in large part because she is seen as the latest manifestation of the ‘Clinton Machine,’" he acknowledged, referring to the entrenched connections and loyalists in the US establishment.

Sanders has routinely criticized Clinton for her connections to the large financial institutions on Wall Street and hefty payments and donations she received from them.

President Putin was also accurate in his observation because the very structure of the US political system was strongly weighted against change, renewal and reform by electing new people with different ideas to the two chambers of Congress, Schirach maintained.

"The real problem in American politics is that the system at the congressional level — mostly in the House of Representatives, but also in Senate elections — strongly favors incumbents," he stated. "This prevents the renewal of the national leadership. And this is a real issue."