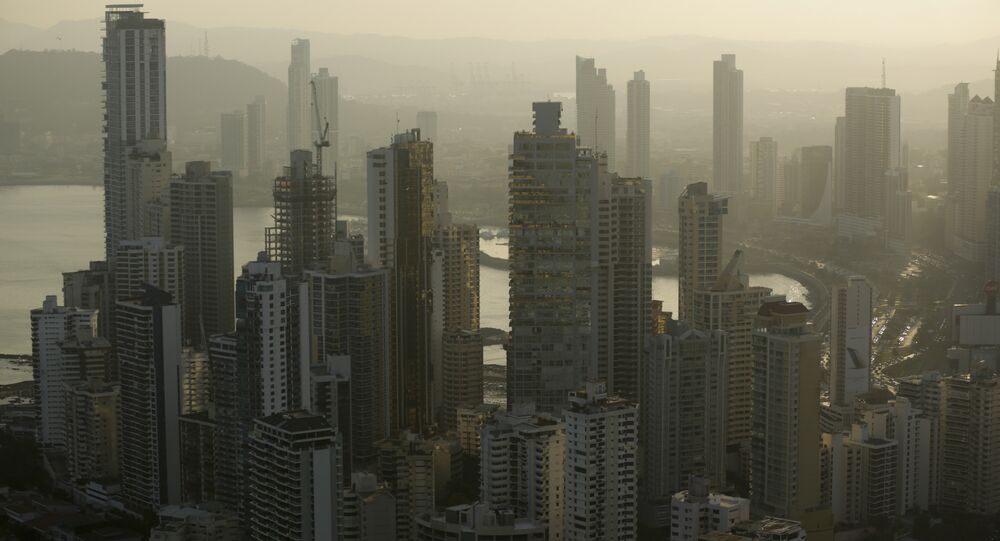 Who is behind the Panama Papers leak and who is funding the coverage of the issue? There is something fishy about the Western media campaign that has been triggered by the disclosure, experts say.

On April 3, Suddeutsche Zeitung ('South German Newspaper') published a report based on the leaked documents of the Panamanian company Mossack Fonseca that cast light on the alleged involvement of prominent political figures and their associates from around the globe in shadow tax evasion schemes.

However, the first thing that caught everyone's eye was Vladimir Putin's name, and face, used literary as a "selling point" for the Panama Papers by the US and European media, despite the fact that in reality the name of the Russian President hadn't been mentioned in the leaked documents.

It is also strange that as of yet, no American clients of Mossack Fonseca have been named, despite the fact that "there are at least 441 clients, 3,072 companies, 211 beneficiaries and 3,467 US-based shareholders of the Panamanian law firm," according to financial blog Zero Hedge.

The United States is pure and good and incorruptible. pic.twitter.com/Xo9LEuCavF

​"It's always worth taking a step back from whatever you read in the media — and seeing who's funding this, what are the corporate interests behind what is being published in this particular outlet," Annie Machon, a former MI5 agent told Russia Today.

© Sputnik / Aleksey Nikolskyi
#PanamaPapers: Who is Trying to Prevent US-Russian Détente
"The BBC is state funded, Fox News is corporate funded — there is always going to be some sort of agenda behind any editorial decisions on any medium there," she added.

Indeed, the Western media's selective approach in covering the Panama Papers issue has prompted a lively debate. The leak amounts to 11.5 million documents or 2.6 terabytes of data and still "much of the leaked material will remain private," according to the Guardian.

It is more important what still remains behind the curtain, rather than what has been brought to light, Craig Murray, human rights activist, author and former British Ambassador to Uzbekistan, believes.

The British author called attention to the fact that "there is no mention at all of use of Mossack Fonseca by massive Western corporations or Western billionaires — the main customers."

"Why focus on Russia? Russian wealth is only a tiny minority of the money hidden away with the aid of Mossack Fonseca. In fact, it soon becomes obvious that the selective reporting is going to stink," Murray wrote on his blog.

© Flickr / Insider Monkey
George Soros’ Anti-Kremlin Information Laundering Backfires on Clinton, Cameron
It is hardly surprising that major tax evasion culprits will remain unpunished, the former British ambassador noted, referring to the fact that the leak is being managed by the International Consortium of Investigative Journalists (ICIJ), organized and sponsored by the USA's Center for Public Integrity.

Two days later WikiLeaks echoed Murray's assumption, claiming that the leak coverage was funded by the US Agency for International Development (USAID) and most notably billionaire investor George Soros.

There is yet another sign that the American financial establishment could have been behind the leak that actually appears to be an attempt to kill two birds with one stone.

© AP Photo / Vahid Salemi
'Redirecting Money': Why US Could Be 'Behind #PanamaPapers Leak'
In an interview with Sputnik journalist and financial expert Ernst Wolff suggested that the release of the scandalous documents is the Washington elite's way "to drain certain tax havens and position (the US) as the new largest tax haven."

"These offshore companies are estimated to possess about 30 — 40 trillion dollars. And the United States, of course, is interested in redirecting this money to the country," Wolff underscored, adding that the selective exposure of the leaked documents allows Washington to get rid of certain tax havens and at the same time to throw a stone in Russia's garden.

"After years of lambasting other countries for helping rich Americans hide their money offshore, the US is emerging as a leading tax and secrecy haven for rich foreigners," the media outlet wrote.

"Everyone from London lawyers to Swiss trust companies is getting in on the act, helping the world's rich move accounts from places like the Bahamas and the British Virgin Islands to Nevada, Wyoming, and South Dakota," the article revealed, adding that even Rothschild, "the centuries-old European financial institution," has already opened a trust company in Nevada.

"That money is rushing for one simple reason: dirty foreign — and local — money is welcome in the US, no questions asked, to be shielded by the most impenetrable tax secrecy available anywhere on the planet," Zero Hedge commented on the issue.

The Panama Papers "project" leaves more questions than answers. However, according to Stephan Plochinger, Suddeutsche Zeiting's tech editor, there are more revelations to come.

Sueddeutsche Zeitung Refuses to Hand Over ‘Panama Leaks’ to Authorities

Case Closed: Putin Not on Offshore Fraudster List, Has Nothing to Add