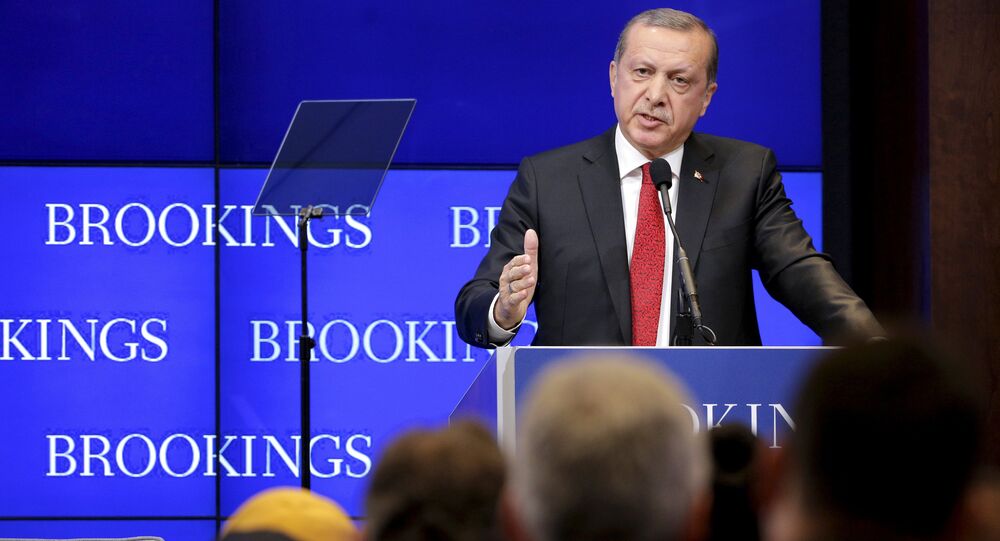 Recep Tayyip Erdogan's recent visit to the US has been marred by an embarrassing incident that saw the Turkish president's security detail scuffle with journalists and protesters. Turkey's image will surely suffer as a result, journalist Amberin Zaman told Sputnik.

"Now when anyone mentions Erdogan's visit to Washington, this is the first thing that comes to mind – unacceptable and disruptive behavior of the bodyguards of the Turkish head of state. Sadly, after similar incidents Turkey's image abroad, which has not been too positive to begin with, has been ultimately reduced to nothing," she said.

Zaman knows firsthand what happened at the Brookings Institution shortly before Erdogan was scheduled to deliver a speech at the Washington-based think tank. Erdogan's bodyguards verbally insulted the journalist.

This Erdogan security detail called me "a pkk whore"
For standing in the driveway of @BrookingsInst pic.twitter.com/jMxwcG1ftd

​Zaman added that the bodyguards acted as if they considered themselves to be above the law.

"The Washington visit ended with scenes making a mockery of Turkey's image. While Erdogan was telling Americans that Turkey is a democratic and free country that guarantees freedom of expression, scenes outside were contradicting him," Turkish journalist Fehim Taştekin wrote for al-Monitor.

© REUTERS / JOSHUA ROBERTS
Turkish security personnel struggle to take a sign away from protesters in front of the Brookings Institute before the arrival of Turkish President Recep Tayyip Erdogan in Washington.
© AFP 2020 / JIM WATSON
Rolling in the Deep: 'Sultan' Erdogan Was Bound to 'Fall Out of Obama's Favor'
Turkey has long been chastised for its abysmal record when it comes to the freedom of the press. The authorities have recently made headlines when they took over the leading opposition newspaper, Zaman, much to international condemnation.

Following a brief meeting with Erdogan, US President Barack Obama said he was troubled with the current trend in Turkey and urged Ankara to refrain from pursing "a strategy that involves repression of information and shutting down democratic debate."

'Turkey isn't the Problem': Who Poisoned Ankara's Relations With Washington