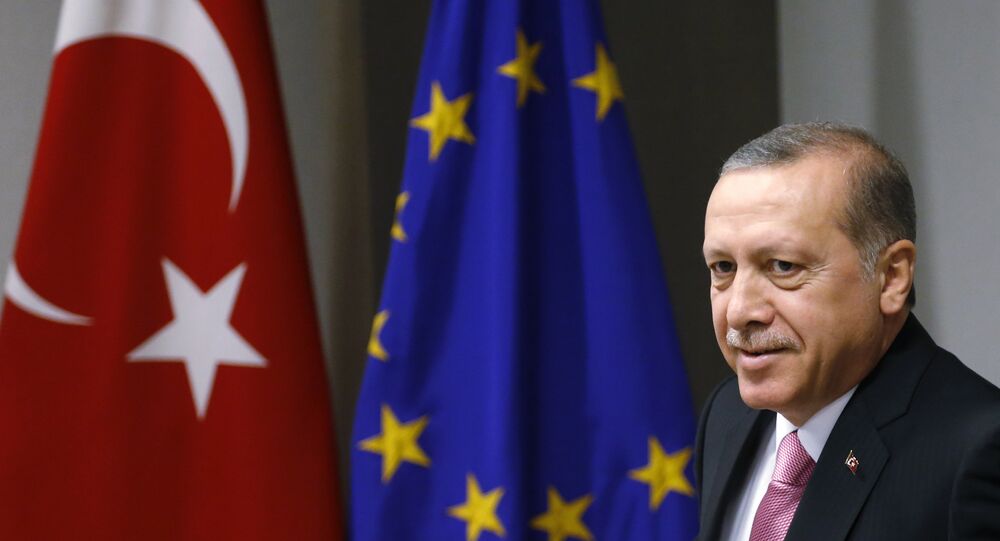 Pushing the European Union to make concessions to Turkey considering its accession to the bloc, President Erdogan may have won a Pyrrhic victory, American historian Daniel Pipes writes. Amid the major migrant crisis, Europeans not be too embracing of the increased influx of Turkish citizens to the continent.

Blackmailing Brussels, the Turkish president risks leading his country into a catastrophe of unprecedented scales that would likely result in the collapse of the state, Pipes, who is the president of the Middle East Forum, wrote in an opinion column for The Washington Times.

© AFP 2021 / JIM WATSON
Rolling in the Deep: 'Sultan' Erdogan Was Bound to 'Fall Out of Obama's Favor'
According to the historian, Erdogan has taken advantage of millions of Syrian refugees seeking a chance to get to northern Europe, using the moment as a tool to push his own agenda through.

Under the state leader’s plan, Europe has to generously pay Ankara for its assistance in resolving the migrant crisis, allowing some 80 million Turkish citizens to cross into the EU without visas. Otherwise he threatens to clear barriers for migrants heading to Europe from Syria as well as from the entire Middle East.

But given that the Erdogan’s plan has proven effective at the exact moment of time, as Angela Merkel persuaded the leadership of the bloc to make concessions to Turkey, it doesn’t mean that the trend won’t be reversed one day, Pipes asserts.

“But this may well be a Pyrrhic victory, hurting Mr. Erdogan’s long-term interests,” he stressed. “In the first place, forcing Europeans to pretend they are not being blackmailed and to welcome Turkey with clenched teeth, creates a foul mood, further reducing, if not killing off, Turkish chances for membership.”

© Sputnik / Michael Klimentyev
Breaking the Ice: How Turkey Tries to Win Russia Over
Moreover, Erdogan’s gambles will result in a shift in the European perception of the migrant crisis. People have already begun protesting over the growing inflow of migrants to the EU from Middle East countries, including Turkey. The loss of Merkel’s Christian Democratic Union at regional elections in Germany proves that suggestion, Pipe outlined.

Above all, Ankara policies of supporting Sunni Islamists in Syria will eventually hurt Turkey that will face increased numbers of migrants arriving to the country. Pipes added that Turkish residents will not likely endorse the migrant influx. And that could lead to a social explosion within the state, he said.

"This is just the start. In combination, these errors by Mr. Erdogan point to more crises ahead,” Pipes wrote.