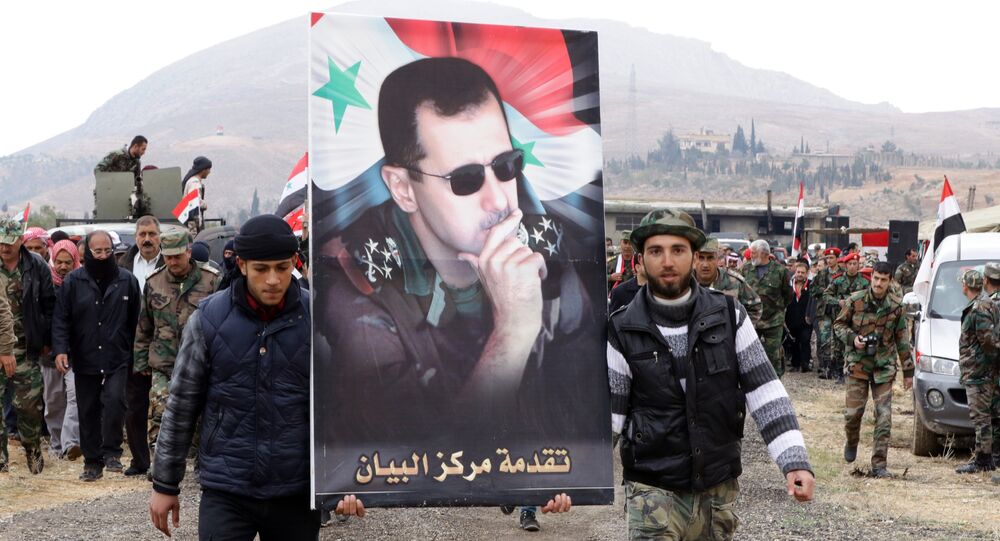 Barack Obama has allegedly pulled the plug on a detailed 2012 CIA plan designed to support Syrian rebels and remove President Bashar al-Assad from power, a former CIA field operative Doug Laux, who came up with the initiative, asserted in an exclusive interview with the NBC News.

The initiative was ostensibly backed by key decision-makers in Washington, including then CIA chief David Petraeus, Hillary Clinton, who served as the US secretary of state, and Leon Panetta, who was secretary of defense at the time. But it was Barack Obama, who remained unconvinced that the plan was the right way to proceed.

"We had come up with 50 good options to facilitate that. My ops plan laid them out in black and white. But political leadership… hadn't given us the go-ahead to implement a single one," Laux lamented.

© REUTERS / SANA
A billboard (R) belonging to the Islamic State fighters erected along a road, is pictured after forces loyal to Syria's President Bashar al-Assad recaptured Palmyra city, in Homs Governorate in this handout picture provided by SANA on March 27, 2016
© AFP 2021 / USMC
Surprise, Surprise: Pentagon is 'Actually Training Islamist Militants' in Syria
Some in Washington believe that the plan, if given the green light, would have stopped the bloodshed in Syria, prevented Daesh from rising and saved Europe from the unprecedented wave of refugees. But Laux is doubtful. "I think that's impossible to predict," he said.

Barack Obama later authorized a program aimed at providing non-lethal support to the Syrian rebels. He recently defended this approach in an interview with Jeffrey Goldberg. "The notion that we could have – in a clean way that didn't commit US military forces – changed the equation on the ground there was never true," the journalist quoted Obama as saying.

The US has long maintained that al-Assad must resign before any meaningful peace process could be launched. The ongoing UN-sponsored peace process, endorsed by Russia and the US, offers indirect proof of Washington's shifting agenda. The resolution that paved the way for the Syrian ceasefire and the peace talks made no mention of al-Assad's fate.

© AP Photo / Militant website via AP
Untold Story of Palmyra Battle: How NATO Paved the Way for Daesh Advance
The book, titled "Left of Boom," details Laux's eight-year-long stint in the CIA. It will hit the shelves on April 5. But don't expect to learn additional details about the plan to overthrow the Syrian government since the CIA reviewed and redacted the account.

Laux is said to have resigned from the agency "in frustration." The task to come up with a plan to remove Assad was his final assignment.