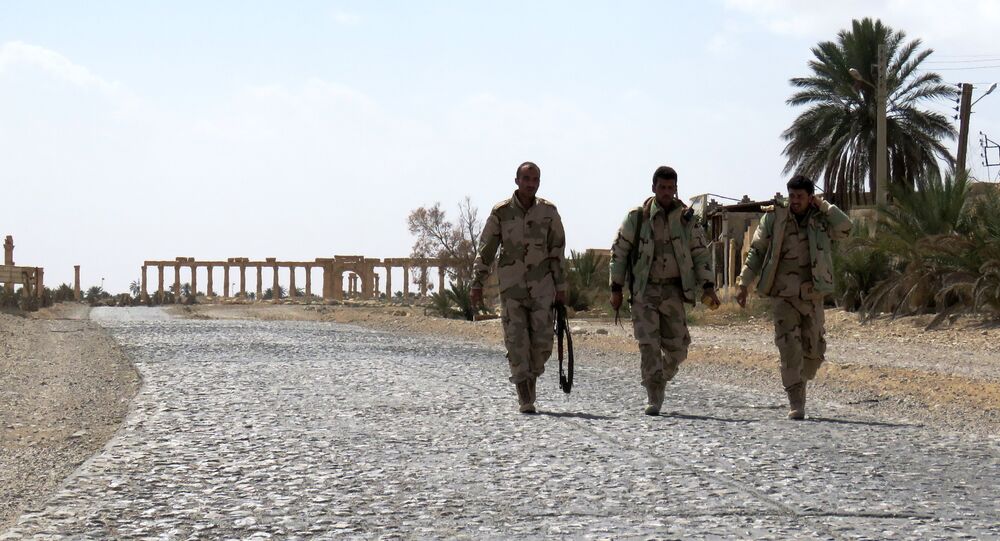 Following the liberation of historic Palmyra, "the pearl of the desert," by the Syrian Arab Army with the assistance of the Russian Aerospace Forces, some Western media sources have made an attempt to downplay the remarkable feat.

The recapture of Palmyra by Syrian forces with Russian air support has caught the US and its NATO allies by surprise. It seemed the Western capitals were numbed by the astonishing news.

"That was a victory. But the reaction was a little bit late. It might seem like no one believes in the liberation of Palmyra," Russian Foreign Ministry spokeswoman Maria Zakharova said during a weekly press briefing in Moscow on Thursday.

"Messers [Barack] Obama and [David] Cameron were as silent as the grave to which ISIS [Daesh] has dispatched so many of their victims," Robert Fisk, The Independent's multiple award-winning Middle East correspondent, commented regarding the unusual reaction of London and Washington to Palmyra's liberation.

On March 31 Fisk's colleague Matt Broomfield presented the story of a man named Mohamed Alkhateb, allegedly a Palmyra dweller, who claimed that "Palmyra has not been liberated," but "has just been transferred from one tyranny to another." Speaking in the name of the people of Palmyra, Alkhateb went even so far as to equate Bashar al-Assad to Daesh.

Still the narrative bears no relation to reality.

Sputnik Arabic reported from the ground that citizens of Palmyra have expressed their gratitude to the Syrian Arab Army and the Russian Aerospace Forces for the liberation of Palmyra, and curse Daesh.

"It was a terrible crime by Daesh, who killed hundreds of civilians.  I thank our army [the Syrian Arab Army] and Russia, which jointly contributed to the liberation of our native city. Now we all are waiting for the end of demining operations so we can return to our homes," one of the residents, a man named Mohammed, told Sputnik Arabic.

© AFP 2020 / STR
Refugees No Longer: Residents Return to Liberated Palmyra, Thank Russia for Helping Hand
Broomfield was not the only journalist who insisted on condemning Assad following Palmyra's recapture.

On Thursday, Rasha Elass of Reuters wrote an article entitled "Assad's 'good deeds' in Syria can't go unpunished." In her Op-Ed Elass argues that regardless of "all the pomp and glory of recapturing the ancient city of Palmyra," it is Bashar al-Assad's fault that the historic site had fallen into Daesh's lap.

"…top Syrian Army commanders and their Iranian advisers withdrew from Palmyra, leaving behind dozens of conscripts without provisions or support," she insists.

Hwaida Saad and Kareem Fahim of The New York Times describe the battle for Palmyra much in a similar vein.

"When the Islamic State captured the city in May, the militants faced little resistance from Syrian troops. At the time, residents said officers and militiamen had fled into orchards outside the city, leaving conscripted soldiers and residents to face the militants alone," the journalists write.

And again it is not what actually happened in Palmyra last May.

A blogger named Moon of Alabama nails the reporters for the distorted narrative.

"That depiction of the battle is pure nonsense. The Islamic State [Daesh] offensive that ended with its occupation of Palmyra took thirteen days from May 13 to May 26, 2015. Heavy fighting and several Syrian army counter offensives took place during those days. After the Islamic State finally captured the city, the Syrian army immediately prepared for a larger operation to regain the city. This was launched successfully in July 2015 but [due to a] lack of air support the gains made were again lost a week later," the blogger emphasizes.

© Photo : Twitter/@AlphaSpecnaz
'Russian Rambo’ Who Died a Hero in Palmyra Liberation Was Expecting First Child
Moon of Alabama notes that the Western journalists somehow failed to mention that the Syrian Arab Army was simultaneously being attacked, at the time, by CIA-backed Syrian fighters and their al-Qaeda allies.

"The sole reason that the Islamic State [Daesh] could successfully attack Palmyra was a very large ongoing attack by al-Qaeda Jihadists and CIA mercenary forces on the Syrian government forces in Idlib Governorate. The Syrian army moved troops from Palmyra to defend Idlib and Latakia and the forces left behind were no longer large enough to repel the Islamic State attack," the blogger underscores.

However, it still remains unclear why the US-led coalition forces had not raised a finger to expel Daesh from Palmyra, allowing terrorists to resupply through the open east-Syrian desert.

Despite these obvious efforts to downplay the Syrian Arab Army's crucial achievement, the importance of Palmyra's liberation cannot be overestimated.

Or, as Boris Johnson, the conservative Mayor of London, said: "Hooray, I say. Bravo — and keep going."