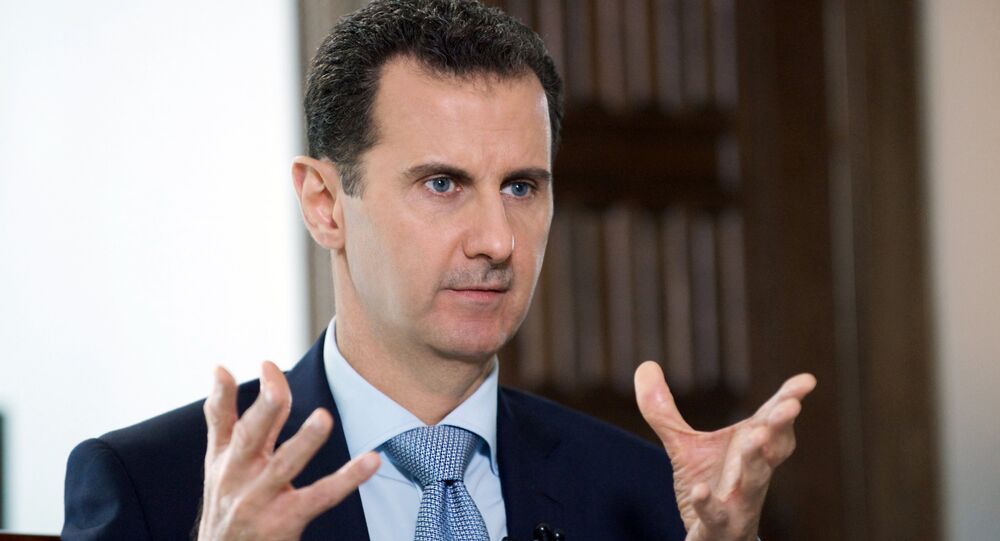 DAMASCUS (Sputnik) — The liberation of Palmyra with Russian support questions the seriousness of the US-led campaign against the Islamic State (also known as Daesh/ISIS/ISIL), Syrian President Bashar Assad told Sputnik.

#ASSAD TO #RiaNovosti & #Sputnik: Liberating #Palmyra is a result of our determination to clean all #Syria of terrorists.

​"We had an urge to completely free Syria of terrorists, this isn’t even up for discussion. There are no other ways to protect Syria than by fighting terrorism. Of course, there's the political process too, but the fight against terrorism is key… The occupation of Palmyra by terrorists about a year ago served as evidence of the coalition's failure, its lack of seriousness in the fight against terrorism, especially Daesh. The fact that the freeing of Palmyra happened with Russian help also proves their lack of seriousness," Assad said.

#ASSAD TO #RiaNovosti & #Sputnik: Some people in the world have understood the liberation of #Palmyra, but don’t want to believe it.

​"Russian support has been the main and most effective factor to achieve these results, so has the support of our friends in Iran, Hezbollah, and other groups in Syria fighting alongside the army," he added.

Syrian Army Must Advance Toward Deir ez-Zor, Raqqa after Palmyra

© Sputnik / Mikhail Voskresenskiy
Syria's Assad Calls on UN Agencies to Help Restore Palmyra
After liberating the ancient city of Palmyra, the Syrian army should advance toward Deir ez-Zor and plan an offensive on Raqqa, Syrian President Bashar Assad said in an interview with Sputnik.

"Of course, after the liberation of Palmyra, we must move on to neighboring regions that lead to the eastern parts of the country, such as Deir ez-Zor. At the same time, we need to begin work in the direction of Raqqa, which is Islamic State's main stronghold," Assad said.

#ASSAD TO #RiaNovosti & #Sputnik: After liberating #Palmyra, our next step is to move to other parts of eastern #Syria.

​The Syrian president reiterated that the fight against terrorism was key to ensure Syria's integrity and security, stressing that the Syrian army was determined to liberate the entire Syrian territory from terrorists.

"There are no other ways to protect Syria than by fighting terrorism. Of course, there's the political process too, but the fight against terrorism is key. And we have such a will, the Syrian people has a will, the Syrian army is determined to free each region," Assad said.