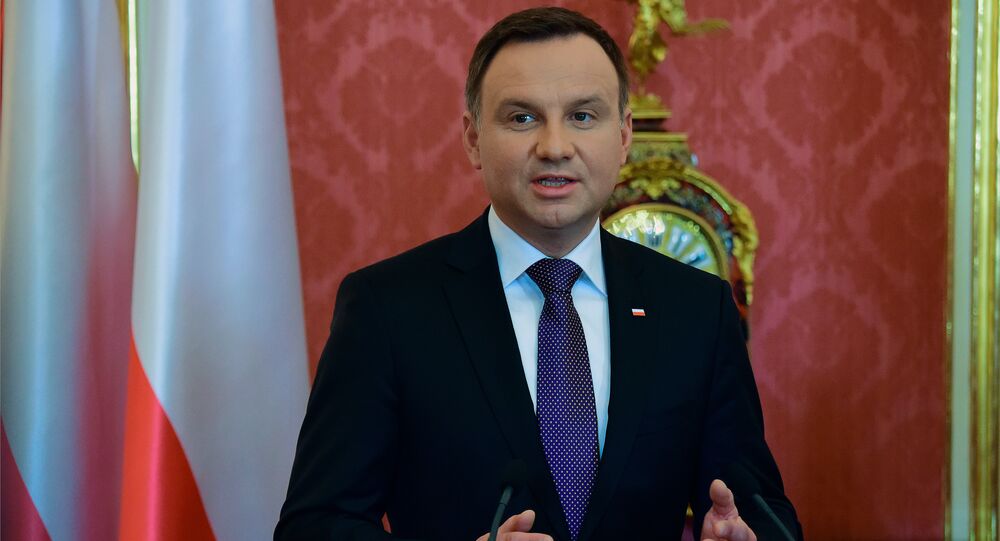 Polish President Andrzej Duda is set to fly to Washington DC for a three-day visit, but the US isn't rolling out the red carpet. In fact, President Obama has pointedly refused to meet with his Polish counterpart, and so have US lawmakers. Polish media have already described the situation as the worst shock in Polish-American relations in 30 years.

© AP Photo / Alik Keplicz
US 'Concern' Over Poland's Democracy Threatens Warsaw's NATO Base Ambitions
Duda is set to arrive in the US capital on Tuesday, in part to attend the Nuclear Security Summit, which is taking place in Washington this year. He is also expected to meet with the presidents of Turkey, Ukraine and Georgia, Radio Poland explains.

However, notably absent from the list of high profile meetings is a one-on-one with US President Barack Obama, who point-blank refused to meet his Polish counterpart, ostensibly over the country's ongoing constitutional crisis.

Ahead of the visit, presidential aid Krzysztof Szczerski told Polish News Agency that in addition to participating in the nuclear summit, set to run between March 31 and April 1, the trip has a second, equally important goal: for the president to "meet with people of influence in Washington and present Poland's point of view on international security issues, as well as discuss [the country's] expectations of the NATO summit in Warsaw."

Unfortunately, the Warsaw Business Journal notes, these meetings with influential persons will not include President Obama, his staff or anyone in the US Congress, apart from Republican Congressional Poland Caucus co-chair Chris Smith.

© AP Photo / Czarek Sokolowski
Majority of Poles Say Country Moving in Wrong Direction - Poll
Citing Polish media, the online business newspaper explained that Polish officials had been asking for an audience with the US president since the beginning of the month, but that Obama declined, "allegedly because of the ongoing constitutional crisis in Poland."

For its part, the Polish daily newspaper Rzeczpospolita warned that the snub by Obama and other senior US politicians was akin to "the US closing the door on Poland," — "a shock in Polish-American relations unwitnessed in almost 30 years."

The chill in relations, the paper added, citing diplomatic sources in Washington, is not just political, and includes Polish-US business ties, with "leading US companies suspending new investments," and "a mood of uncertainty" coming to hang over future commercial ties.

At the same time, Rzeczpospolita notes, Poles have reason to think that Washington is deliberately pouring salt into the wound. Next month, civic activist Mateusz Kijowski, the head of the Polish 'Committee for the Defense of Democracy', will also make a trip to the US capital, except he will get a chance to meet and speak to officials on Capitol Hill and in the State Department. The trip is being organized by the US think tank Freedom House.

Earlier this month, US officials issued a sharp criticism of the Polish government over its standoff with the country's constitutional court. The White House explained that it was worried that the "steps the [Polish] government has taken that may be inconsistent with liberal democratic norms." US criticisms echoed those of the Council of Europe, which argued that changes to the rules of the court's functioning introduced late last year had undermined the separation of powers, the principles of democracy, human rights and the rule of law.

© Flickr / The U.S. Army
Why Washington's Ballistic Missile Defense in Europe Makes No Sense
Polish officials have remained defiant. In mid-March, Poland's outspoken Defense Minister brushed aside US chidings by suggesting that a young nation like the United States has no right to lecture Poland, which "already had structures of representative democracy in the 13th and 14th centuries."

Analysts have suggested that the rift may continue on into the summer, and that US officials might stage a repeat of the Washington snub by refusing to meet with their Polish counterparts during the upcoming NATO summit in Warsaw in July if Poland does not change its behavior. Warsaw has long been eager to station permanent NATO bases on its territory, ostensibly to counter a growing Russian 'threat'.