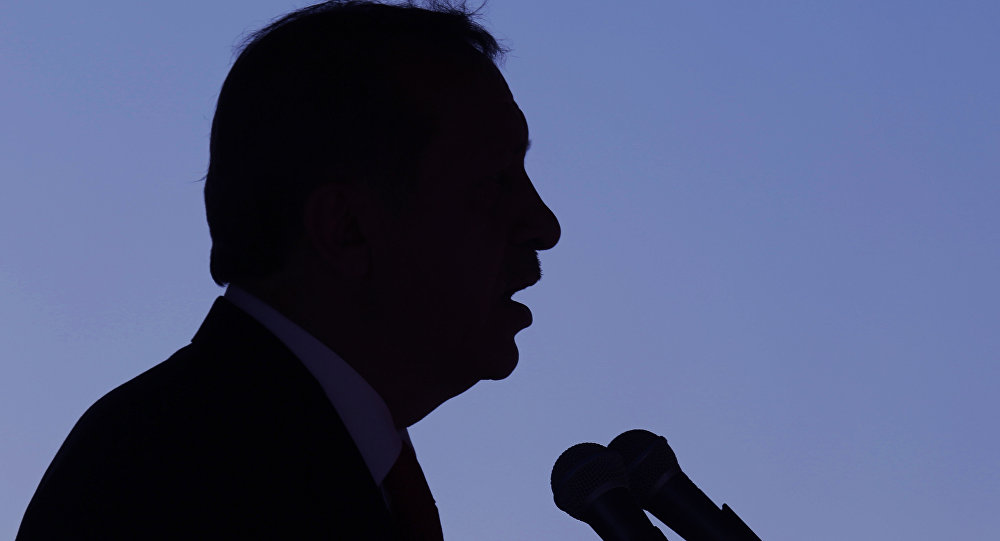 The US has accused Turkish businessman Reza Zarrab of illegal money transferring activities helping Iran bypass American sanctions. If Zarrab strikes a deal with Washington it would deliver a heavy blow to Erdogan.

The arrest of businessman Reza Zarrab in the US came as a bad omen for Turkish President Recep Tayyip Erdogan and his entourage, Al Monitor reported.

"Many believe that Zarrab had to have known he would be arrested the minute he landed in the United States, and that he wouldn’t have made the trip without a deal worked out in advance. His potential disclosures to the US federal prosecutor will surely implicate Turkish officials and, as such, may well be an instrument of pressure on President Recep Tayyip Erdogan," the article read.

Zarrab was detained on March 19 in Florida and has been accused of running a money transferring network and a group of companies in Turkey and the UAE with the purpose to help Tehran bypass US sanctions.

© AFP 2019 / OZAN KOSE
Turkish Businessman Reveals Erdogans' Alleged Money Laundering Scheme
Initially, a probe into Zarrab’s activities was launched by Ankara. It was supposed that the businessman bribed some of the Turkish ministers and their relatives to run his network.

The investigation also revealed that when the SWIFT money-transfer system was barred from working with Iran, Tehran used a bypass system based on Halkbank. Money was first sent to front companies in China, and then was transferred to real or front companies in Turkey, as export reimbursements.

Then, gold was bought with that money and was moved to Iran via Dubai. What is more, at the time Turkey was already paying Iran with gold for the oil and gas it was buying.

Thus, gold worth a total of $8 billion was transferred to Iran through the scheme. However, a larger portion of $13 billion remained in Turkey after the US banned gold exports to Iran in July 2013, the article read.

© REUTERS / Francois Lenoir
With Friends Like These: Washington Could Put Pressure on Erdogan if 'Wanted to Help Europe'
"Many believe that then-Prime Minister Erdogan had to have known what was going on," the article read.

Turkey is concerned about the case being handled by a US attorney known for tackling tough cases. Preet Bharara, the US attorney for the Southern District of New York who prepared the indictments against Zarrab, became a sensation in the Turkish opposition’s social media.

The pro-government wing, in turn, took countermeasures. Some accused the US prosecutor of being part of a conspiracy. The pro-government daily Sabah even declared Bharara a member of the Fethullah Gulen terrorist group.

"A question frequently heard now is, who will Zarrab destroy with his revelations? Some people wonder if Zarrab's arrest is more than it seems, that the timing — while Erdogan faces tensions with the United States, the European Union and Russia — might indicate that someone has had enough of Erdogan," according to Al Monitor.

The author underscored that one of the reasons why Zarrab could have surrendered to the US authorities may be the death sentence for his partner Babek Zencani in Iran.

"Zarrab moved when Zencani was sentenced to death. He was afraid of getting killed in Istanbul after his protector's powers handed him over to [the] mafia. Zarrab felt that his protectors would kill him to cover themselves. He couldn’t go to Europe. Most likely he made contacts with Americans. It is impossible for Zarrab not to know that the FBI would apprehend him the minute he landed in Miami. Clearly there are CIA-FBI intermediaries," former Justice and Development Party (AKP) deputy Fevzi Isbaran was quoted as saying.

He added that Zarrab would have to say what he knows in exchange to get a lighter sentence and save part of his wealth. If Zarrab speaks out the case will become internationally important, he concluded.

US, Europe Will Show No 'Sympathy' to Erdogan in Event of 'Military Coup'

US Urges Turkey to Uphold Democratic Values Amid Public Arrests