This is Why Erdogan Considers Everyone in Turkey a 'Terrorist'

In recent months, Turkish authorities have struggled to contain the wave of terror engulfing the country, but the problem could be with Ankara's approach to dealing with those, whom authorities consider to be terrorists.

© AFP 2019 / YOUSSEF KARWASHAN
RT Exclusive Documentary: Film Crew Discovers Financial Receipts for Turkey-Daesh Oil Trade
In Turkey, the period of relative calm ended in mid-2015 after a two-year-long peace process with the Kurdistan Workers' Party was shattered and Ankara launched a military operation in Turkey's Kurdish regions. The crackdown, however, appears to be fueling terrorism, instead of tackling it.

Soon after came the deadliest assault in the country's modern history. The twin bombings in the Turkish capital of Ankara that took place on October 10, 2015, claimed more than 100 lives. The situation did not improve in the months that followed. This year has already seen four deadly terrorist attacks rock major Turkish cities.

Following the latest car bombing in Ankara that left at least 37 people dead, Turkish President Recep Tayyip Erdogan suggested that terrorism should be redefined. Erdogan believes that there is no difference between "a terrorist holding a gun or a bomb and those who use their position and pen to support terror."

"The fact that an individual could be a deputy, an academic, an author, a journalist or the director of an NGO does not change the fact that that person is a terrorist," the Turkish president claimed.

Al-Monitor called Erdogan's response to the Ankara bombing "disturbing," adding that the president "is using Turkey's troubles to take his increasingly authoritarian rule to new heights." Many worry, that anyone who disagrees with anything the AKP says or does could be labeled a terrorist. 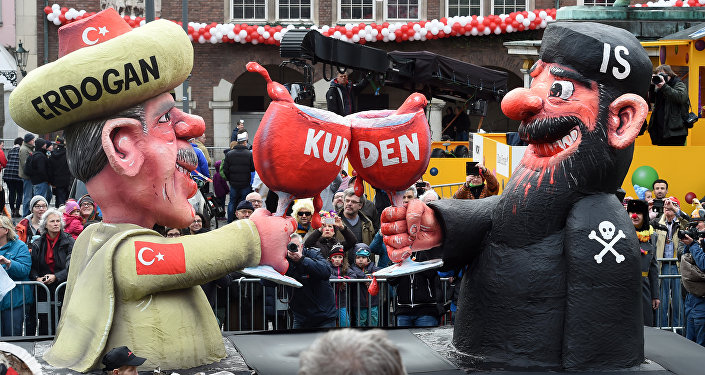 © AFP 2019 / PATRIK STOLLARZ
Turkey Is 'One Step Away' From Dictatorial Powers for Erdogan
By invoking counterterrorism, the government has shielded itself from any criticism. For instance, officials say that no civilians have been killed in Ankara's military operation against the Kurds, but local and international NGOs, as well as relatives and eyewitnesses beg to differ. The crackdown has been largely condemned as a humanitarian disaster.

It follows then that "besides endangering lives and rights, the government's anti-terrorism campaign appears to be woefully ineffective: Far from reining in terror, it may produce yet more," Istanbul-based journalist Zia Weise wrote for Foreign Policy.

Erdogan Says Democracy Has 'No Value', Vows to Crack Down on Opposition