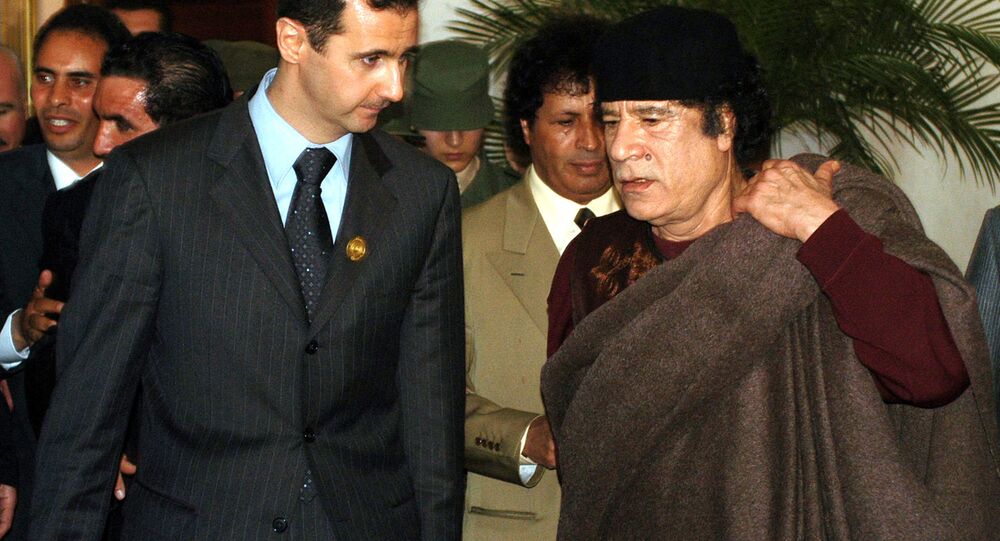 Gaddafi, Assad Warned of Terror Epidemic in Europe, But No One Listened

Libya's late leader Muammar Gaddafi and Syrian President Bashar al-Assad warned that terrorism would be on the rise in Europe if Western leaders help to destabilize the two countries, but no one listened. As a result, Libya and Syria have been plunged into chaos and now Europe has to grapple with a string of gruesome terrorist attacks.

© REUTERS / Yorick Jansens
Brussels Attacks Again Confirm That Terror, Not Russia, is Real ‘Existential Threat’ to West
The latest assault took place on Tuesday as three coordinated bombings rocked the Belgian capital of Brussels, which hosts the headquarters of several international institutions, including the European Union, NATO and the Benelux.

Daesh took responsibility for the attack that claimed 31 lives. The brutal terrorist group was also behind the night of terror in Paris on November 13, a series of coordinated terrorist acts that left 130 people killed.

Evidently, Gaddafi, Assad and others, who shared their concerns, could not predict specific attacks, but they understood regional trends and their implications.

Several months before his death, Colonel Gaddafi warned that unified and stable Libya was the only thing that prevented hundreds of thousands of migrants and terrorists posing as refugees from flooding Europe. "Libya plays a role in security in the Mediterranean," he told the Paris-based France 24 television channel.

© AP Photo / Gregorio Borgia
A rubber boat loaded of migrants is seen during a search and rescue mission in the Mediterranean Sea off the Libyan coasts, Italy, Tuesday, June 23, 2015
© AFP 2021 / ABDULLAH DOMA
Doom and Gloom: Libya Imploding Into Chaos Five Years After NATO Bombings
Nevertheless, France, several other NATO members and other countries went ahead with the military intervention. The country has been plagued by deadly violence ever since. One of the latest developments has seen Daesh gain a foothold in the divided nation.

In 2013, when Western leaders were contemplating sending weapons to Syrian rebels, Bashar al-Assad warned that it was a dangerous scenario to explore. Access to additional weapons would not only strengthen terrorists in Syria, but also result in "the direct export of terrorism to Europe," he argued.

"If the Europeans deliver weapons, the backyard of Europe will become terrorist and Europe will pay the price for it," he said.

In early 2015, Ahmed Gaddaf al-Dam, Gaddafi's cousin and former intelligence official, predicted that a terrorist act, comparable to the 9/11 attacks in the US, would take place in Europe "within one or two years."