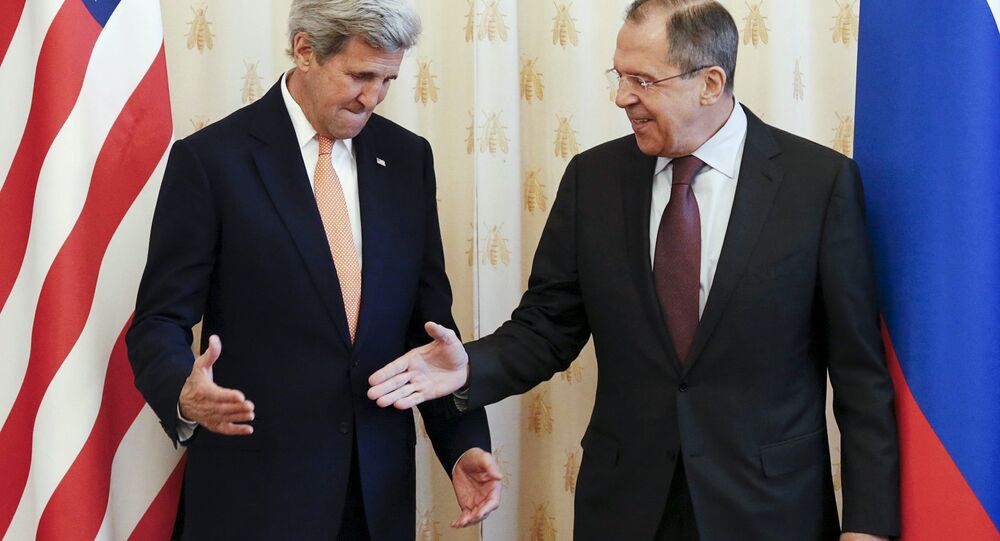 Russian Foreign Minister Sergei Lavrov said Thursday that he would discuss Russia-US cooperation on international issues during his meeting with US Secretary of State John Kerry.

"As we agreed, we will pay the most attention today to cooperation on the international arena, especially on Syrian settlement, but we will also discuss other problems, such as the situation in the Middle East and North Africa. We will exchange views on how the international community may contribute to settling the Ukrainian crisis," Lavrov said.

"Just a few weeks ago, there were very few people who believed there were chances to reach cessation of hostilities was possible in Syria," Kerry addressed Russian Foreign Minister Sergei Lavrov at the start of their joint meeting.

“There has been a fragile, but nevertheless beneficial reduction in violence, some say as much as 85-90 percent, in Syria," he underscored, noting the role of the two countries as co-chairs of the International Syria Support Group (ISSG).

Kerry also said he and his counterparts hoped the latest meeting with Russian Foreign Minister Sergei Lavrov will "chart the road ahead" to bring the Syrian conflict to an end.

"I know that many people are very hopeful, our counterparts with whom you and I have talked in the last days, are hopeful that these meetings here in Moscow today have an ability to be able to further define and chart the road ahead so that we can bring this conflict in Syria to a close as fast as possible," Kerry said.

© Sputnik / Ramil Sitdikov
Lavrov, Kerry Set to Discuss Syria Ceasefire, Humanitarian Issues in Moscow
The latest is Kerry’s third visit to the Russian capital with the aim to reach further progress on the truce between Syrian government and rebel forces that took effect nearly a month ago.

"And also so that we can find a way to cooperate on other challenges of the region – Yemen, Libya, the Middle East peace – and indeed prove that two powerful nations that have been able to find cooperation in the past few years despite differences, have an ability in the face of this urgency to do what is necessary to meet the challenge," he added, opening the joint session before adjourning for a closed-door working meeting.

US State Secretary John Kerry urged countries worldwide to make more efforts to eradicate extremism, and Daesh terrorist group in particular, in the wake of the deadly attacks in Brussels.

"Yesterdays events in Brussels underscore for all of us the urgency, every country needs to make the efforts to end this evil scourge that comes from Daesh [IS] and violent extremism," Kerry said during a meeting with Russian Foreign Minister Sergei Lavrov in Moscow.

Russian Foreign Minister Sergei Lavrov said that he expects his meeting with US Secretary of State John Kerry to be useful, and that it will allow the sides to report to Russian President Vladimir Putin on their vision for future Russia-US cooperation.

"I expect that today's talks will be useful, and that after they end, we will be able to report to President Putin during a meeting at the Kremlin how we see future cooperation on the international arena," Lavrov said.

Kerry arrived in the Russian capital for a two-day visit on Wednesday.