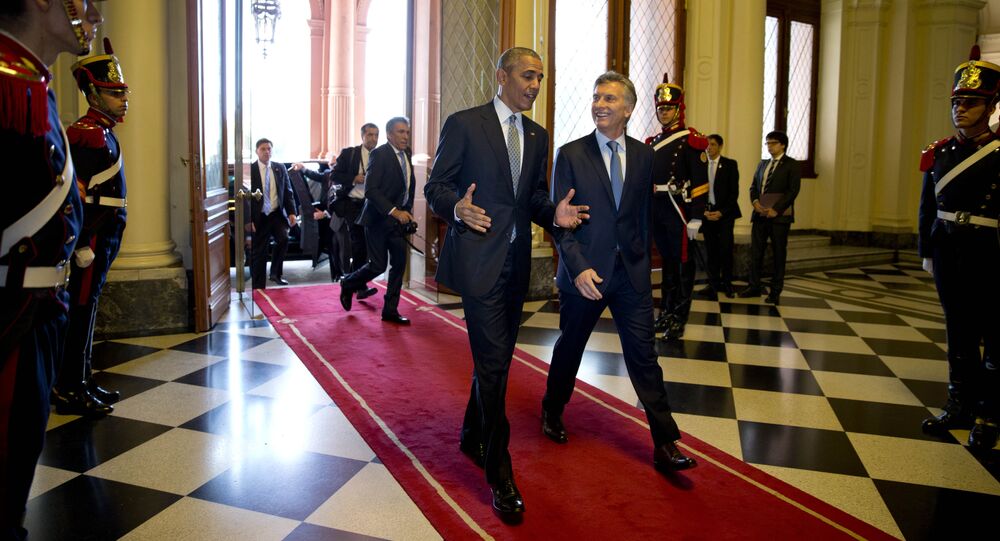 Days after an historic visit to Cuba, President Obama meets with a vulture capitalist’s handpicked leader in Argentina, for political damage control.

​Loud & Clear's Brian Becker sat down with journalist and author Greg Palast to speak about President Obama’s trip to Argentina and how vulture capitalists targeted the country and its previous left-wing government.

"It is clear that he is going there to balance out the fact that he was with these old revolutionary commies in Cuba," Palast told Loud & Clear. "Now he is going to Argentina because they just threw out their leftist government and replaced it with a new right-wing president who just took office named Mauricio Macri."

What are the differences between Macri and the Kirchner government that just left?

"For the dozen years the left-wing government was in power, it was headed by Nestor and Kristina Kirchner. They were very much in line with the politics of Hugo Chavez in Venezuela, old left-wing politics," explained Palast.

Palast stated that the leftist politics that divided the national resources of copper, oil, gas, and gold to the working class and poor actually led to an economic resurgence in Latin American countries, prior to a collapse in commodities prices.

"One thing about the old left’s politicians like Chavez, Kirchner, Correa, Evo Morales, and Lula is that their economies zoomed, despite the fact that we are warned that once you have a leftist in, everything goes to hell."

Is Macri a legitimate leader or a corporate puppet? Tell us about Paul Singer

Macri’s rise to power, Palast said, can be traced to multi-billionaire Paul Singer, who has been called "the vulture," seeking a $2.5 billion payday that he ultimately received. "Singer finds a way to profit on things dying – he did it in the US and he did it in the Congo prior to Argentina," said Palast.

In the Congo, "he profited on the relief funds sent to the Congo to help with the cholera epidemic and one UN Deputy Secretary said ‘I hope he knows that his business is killing babies,’" recalled Palast.

In the United States, "[Singer] went after something else that was dying – the US auto industry," said Palast. "He seized control of General Motors’ auto parts division and, according to the US Treasury, he used ‘extortion’ to get billions from the US Treasury because he threatened to shut down GM’s supply of auto parts, which would have killed the US auto industry."

A similar arrangement happened in Argentina, as the Kirchner government repelled Singer, saying he "was using extortion to get money out of Argentina." Palast noted that, "when Argentina was in a financial crisis, he could load up on debt for pennies and then use that to hold the country hostage, he spent only $50 million to buy up old debt and turned around to ask Argentina to pay him $3 billion to call those debts off."

"Singer is a financial terrorist," said Palast, "the Kirchner government said no, you did this to the US and it was extortion there but we are not the American government, we cannot write checks for $3 billion without going bankrupt again."

"This brings us to Macri and Obama’s visit to Argentina. We have a president in Argentina who is basically Singer’s boy, because he would not have been elected if Singer hadn’t funded a massive smear campaign accusing the Kirchners of murdering people. It was much nastier than the US election we are seeing, which has also been pretty nasty," said Palast. "[Singer] funded it all so he could get Macri to write him a check, and the Argentine President wrote Singer a check for $2.5 billion."

US Democracy and Singer: Clinton stood up to ‘vulture’ who now opposes Trump

Effectively, the Obama Administration is in Argentina doing political damage control, because not only has Singer funded a puppet candidate in the country, but he is also a primary funder of the US Republican Party. Clinton has not only tackled Singer on Argentina, but, with Bernie Sanders, has also called for a closing of the so-called carried-interest loophole which, Palast declared, is "literally worth billions of dollars to Paul Singer."

"Paul Singer is the funding source for Paul Ryan, the Republican Speaker of the House, who will chair the Republican convention in July, so, if there is a tested convention, it is really Singer who is going to be setting the rules against a candidate like Trump," said Palast. "Singer is also the largest donor supporting the Republican senatorial campaigns so, of course, Paul Ryan had a secret meeting with ‘the vulture’ to talk about the upcoming elections this week in Palm Beach."