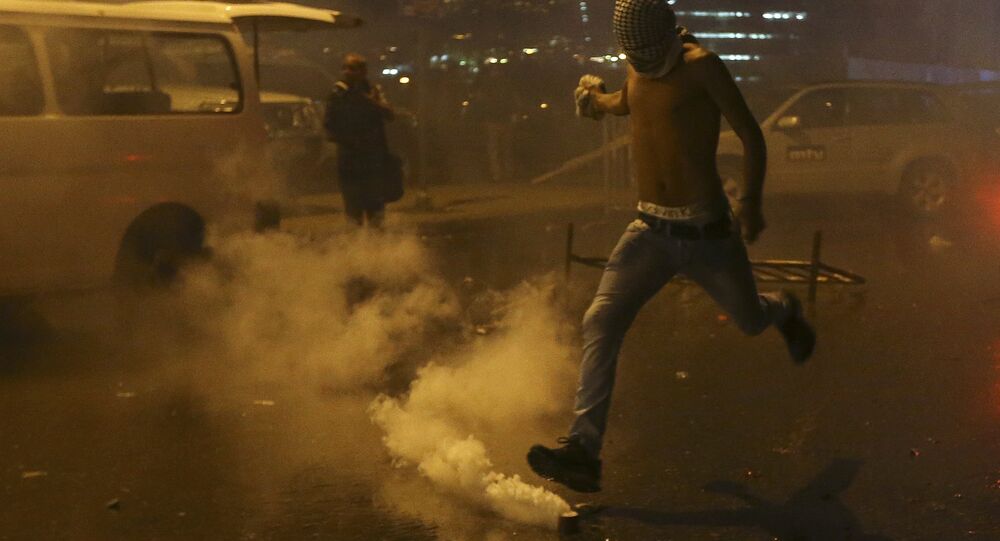 Is Lebanon teetering on the edge of a new civil war? French intellectual Thierry Meyssan suggests that the failure of a regime change operation in Syria will prompt Saudi Arabia and its Western backers to seek a new target in the Middle East.

Lebanon's much discussed "garbage crisis" is by no means an accident, but one link in the chain of political events which could escalate into social turmoil, Thierry Meyssan, French intellectual, founder and chairman of Voltaire Network and the Axis for Peace Conference, writes.

The Lebanese government is trying to find the way out of the country's 7-month-long trash crisis, which "suddenly" began in August 2015.

"The state was unable to renew its contract for garbage removal by the Sukleen company. Within a few days, the entire country became a vast trash dump, and rubbish piled up in the streets," Meyssan notes in his article for Voltairenet.org.

© AP Photo / Hasan Jamali
More Than Meets the Eye: Real Reasons Behind Strained Saudi-Lebanese Relations
The problem prompted thousands to take the streets of Beirut. The demonstrators accused the government of mismanagement and corruption, sparking rumors of yet another "Cedar Revolution" in the country.

Tensions over the garbage crisis are still simmering in Lebanon. According to The Daily Star, The We Want Accountability group Wednesday lambasted Beirut's most recent trash plan which envisions the opening of three landfills around the capital "as another example of the government's corruption, and warned of 'surprise' measures."

But is the situation that pure and simple?

According to Meyssan, there is serious trouble brewing in Lebanon.

"Over the last seven months however, the country has been shaken by the 'garbage crisis' and the resulting demonstrations which could have led to a second 'Cedar Revolution,' then by a crisis of confidence with Saudi Arabia and its allies, and finally by the international accusations against Hezbollah," the journalist notes, adding that the combination of the three events looks rather sinister.

© AP Photo / Hani Mohammed
Hezbollah Chief Thanks States Rejecting to Recognize Movement as Terrorists
Fanning the flames of the ongoing crisis, Saudi Arabia forbade its subjects to travel to Lebanon under the pretext of Beirut's "inappropriate" reaction to Riyadh's decapitation of peaceful cleric Nimr al-Nimr.

The execution of al-Nimr prompted a wave of indignation among the Shiite populations of the world, including Lebanon.

Previously, Riyadh also annulled a $3 billion aid package to the Lebanese Army as well as $1 billion to support the country's economy.

© AP Photo / Mohammed Zaatari
Hezbollah Refutes Reports on Group's Withdrawal From Syria - Press Service
On the other hand, the expulsion of 300,000 Lebanese workers from Saudi Arabia, which send home about $4.7 billion annually, has also dealt a heavy blow to the country's economy.

If other Gulf States follow in Saudi Arabia's footsteps, it will leave the Lebanese economy in tatters, since the country relies heavily on trade and collaboration with Gulf monarchies.

To add insult to injury, in December 2015, the US Congress passed a law forbidding banks to work with Hezbollah and other organizations connected to the Lebanese Resistance.

Besides its antagonistic stance toward Israel, Hezbollah, a Shia Islamic militant group, is also well known for its participation in the fight against Daesh in the Middle East.

"The US law was followed by a resolution by the Gulf Cooperation Council, then by the Ministers of the Interior and Foreign Affairs of the Arab League, who qualified Hezbollah as a 'terrorist movement'," Meyssan continues, adding that the American lawmakers also seek to decrease the country's Al-Manar TV channel broadcasting capabilities.

Lebanon's economy is teetering on the brink of collapse, the French journalist notes.

"The failure of the operation against Syria has forced the colonial parties to seek a new target. While a second civil war can still be avoided, it will be difficult to avoid a new invasion," he believes.