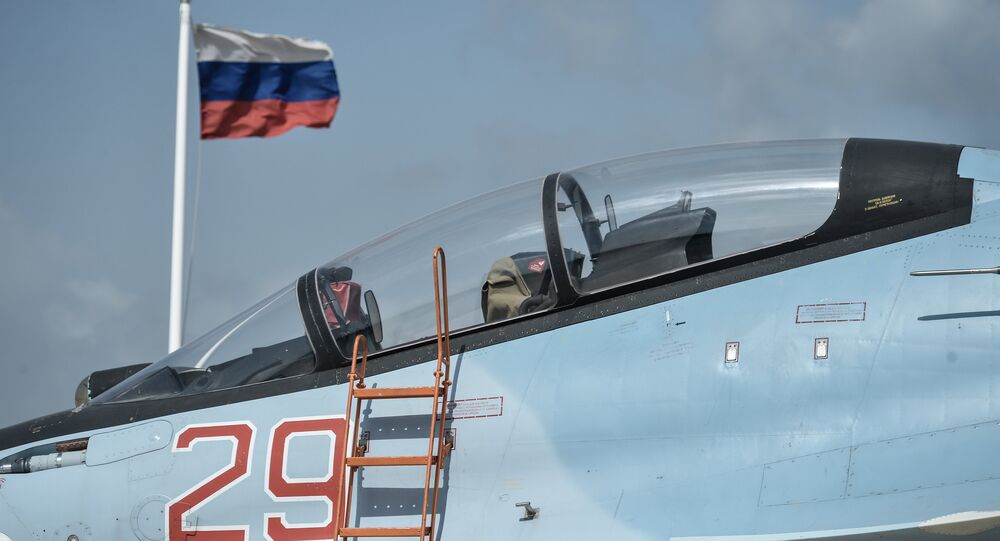 Commenting on the withdrawal of Russian air power from its base in Hmeymim, Syria, French news magazine Le Nouvel Observateur suggested that the move once again demonstrates that whatever happens next in Syria, Vladimir Putin 'continues to hold the main cards in his hands.'

As Russian air power continues its withdrawal from Syria, with four more Russian jets touching down in Russia's Krasnodar region on Wednesday afternoon, analysts and pundits have begun speculating on what impact the move will have for the latest round of inter-Syrian peace negotiations in Geneva.

​For its part, France's Le Nouvel Observateur (L'Obs) suggested that the timing of Moscow's move was no coincidence.

"Vladimir Putin has repeatedly insisted that the [Syrian] operation would be a tactical one, localized in nature and limited in duration." Nevertheless, when the president followed up his words with deeds, the decision came a surprise for many, the magazine noted.

© Sputnik / Ramil Sitdikov
What’s Behind the Move? Most Discussed Ways to View President Putin’s ‘Syrian Surprise’
"For most players in the Syrian conflict, the fate accompli came as welcome news. The Security Council said that it considered the withdrawal a 'positive step'. However, the withdrawal also raises many questions."

With Russian officials and journalists pointing out that the withdrawal was the logical end result of the fact that the Russian mission had 'generally fulfilled' its goals of stabilizing the Syrian government, beating up on the terrorists and brokering a ceasefire, the magazine, like many of its Western media counterparts, assumed that Moscow must also have some ulterior motives.

These, it suggested, include the Russian president's desire to be able to "boast about having played a positive role" in the Syrian peace process (why not?), and the desire not to get caught in a military quagmire (perhaps recalling some of the more embarrassing American and European quagmires in recent years).

​L'Obs recollected the fact that since the start of the Russian air operation, the West had accused Moscow of focusing not so much on the Daesh terrorists as on anti-government rebels.

Moscow, for its part, never shied away from admitting that its operations also targeted the Nusra Front (al-Qaeda's franchise in Syria), the Islamic Front, the Jaish al-Fatah ('Army of Conquest'), and other so-called rebels associated with or allied with jihadi groups.

© REUTERS / Defence Ministry of Russia
Russia's Latest Move in Syria Serves to Reinforce the Diplomatic Track
Russia's campaign, the magazine said, had destabilized and disoriented the opposition, and caused it to lose ground. At the same time, it suggested, the halt of the Russian air campaign could give militants a chance to regain lost ground.

However, in practice, with reporting procedure on ceasefire violations noting that violations are to be brought to the attention of the International Syria Support Group Ceasefire Task Force (which Russia co-chairs along with the US), any opposition groups that might think about violating the truce would have quite a bit of explaining to do, both to their benefactors and in Geneva. This, hopefully, will inhibit any thoughts of 'regaining lost ground'.

In any case, L'Obs noted, "the fact that the partial withdrawal has coincided with the start of negotiations in Geneva is no coincidence, and can be interpreted as a sign of Russia's willingness to move forward in the diplomatic field," something Russia has actually called for from the beginning of its air campaign.

"Already on the first day of the new round of negotiations between representatives of the Syrian regime and the very disparate Syrian opposition, the fate of President Basher al-Assad came under debate, and threatened to derail the peace process. In any case, Vladimir Putin has shown once again that he holds the main cards in his hands," the magazine concluded.