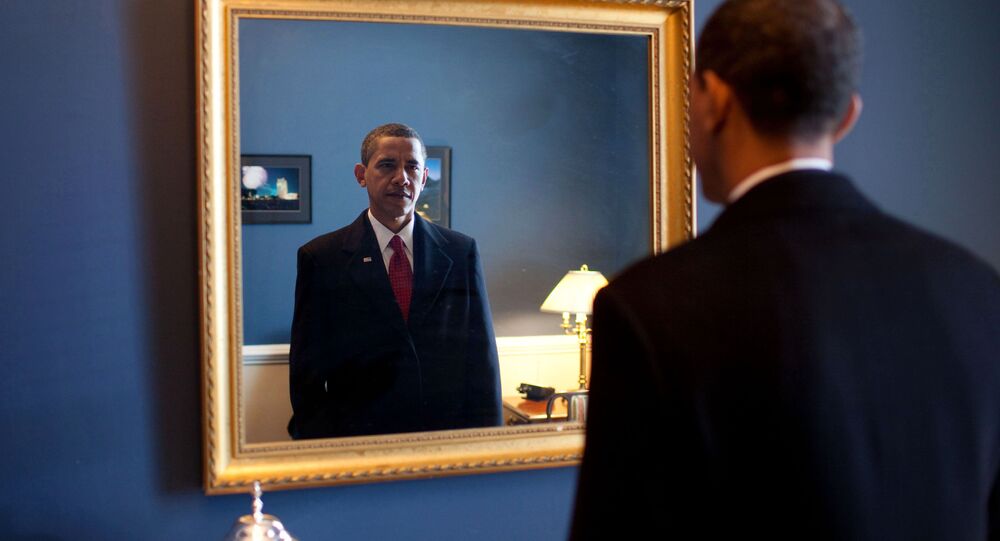 Did Barack Obama really "chicken out" when it came to enforcing his "red line" against Syrian leader Bashar al-Assad after a 2013 sarin attack, as US neocons insist? According to investigative reporter Robert Parry, the US President had plausible reasons to step aside.

Washington's foreign policy establishment, dominated by neocons, has never missed a chance to lambast US President Barack Obama for not enforcing his "red line" against Bashar al-Assad back in 2013.

"For Official Washington's foreign-policy elite, Obama's flinching from a bombing campaign against Assad was a historical inflection point for which Obama deserves hearty condemnation," US author and investigative reporter Robert Parry narrates in his article for Consortiumnews.com.

"Friday, August 30, 2013, the day the feckless Barack Obama brought to a premature end America's reign as the world's sole indispensable superpower," Goldberg remarks, referring to the events which followed the August 21 deadly sarin attack in the Damascus suburbs in 2013.

What has been remaining largely unnoticed for years is that fact that the "US intelligence was unsure whether Assad was responsible for the attack," Parry stresses.

"What I was told by intelligence sources at the time was that the evidence against Assad was anything but a slam dunk," the investigative reporter points out.

© AP Photo / Hassan Ammar
Contrary to West's Humpty-Dumpty Allusion Syria is 'Coming Together Again'
While US warmongering neocons leaped to a conclusion that it was Bashar al-Assad's military forces that launched sarin attacks against Syrian civilians, American intelligence professionals had serious doubts about Assad's alleged guilt.

Indeed, in his analysis for London Review of Books published in 2014, Pulitzer-prize winning investigative reporter Seymour Hersh shed light on the tragic events revealing that intelligence officials had traced the attack to Islamists and the Turkish secret service.

"The joint chiefs also knew that the Obama administration's public claims that only the Syrian army had access to sarin were wrong. The American and British intelligence communities had been aware since the spring of 2013 that some rebel units in Syria were developing chemical weapons," Hersh underscored.

Remarkably, on December 14, 2015 Eren Erdem, a member of Turkey's main opposition Republican People's Party (CHP), told RT that there was ample evidence that chemical weapons materials for the production of sarin gas had been delivered to Daesh in Syria via Turkey in 2013. He also claimed that the Turkish leadership was aware of these supplies.

However, back in 2013 Washington was very close to intervening in Syria.

"The neocon strategy almost worked. Across Official Washington and the mainstream US news media, there was a classic rush to judgment," Parry recalls.

"They [neocons] saw the sarin attack as the catalyst for another 'regime change,' so the last thing they wanted was a sober analysis of the evidence. They wanted a 'group think' to take hold and to bait a reluctant Obama into action by portraying him as a wimp if he didn't start bombing right away," he emphasizes.

© REUTERS / Mikhail Klimentyev/Kremlin
‘Iran, Russia the Most Stable and Independent Players in the Middle East’
Parry praises Obama for showing reasonable caution that allowed him to avoid the neocon trap and to approve the joint US-Russian initiative aimed at eliminating chemical weapons in Syria.

According to the investigative reporter, if the US President had launched a bombing campaign against the Syrian Arab Army he might have paved the way for Daesh and the al-Qaeda affiliate al-Nusra Front to capture Damascus and drag the country into the abyss of a perpetual war.

"After all, admitting that another neocon 'group think' was dangerously misguided — after the Iraq War WMD fiasco — might finally topple some of these self-important pundits from their endowed think-tank chairs. Americans might finally recognize that these pompous know-it-alls are really just vacuous know-nothings," the reporter stresses.

However, it is unlikely that official Washington's foreign policy elite will ever admit its mistakes. US neocons are so obsessed with the myth of Obama's utter failure to enforce a "red line" against "guilty" Assad, that they are not bothered by the lack of evidentiary support.