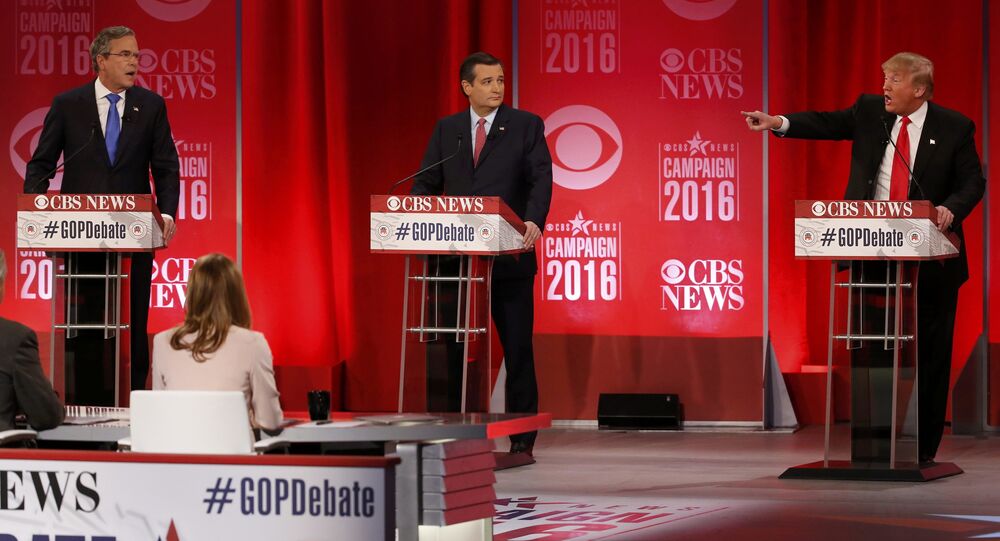 Neocons and some among the GOP elites are beside themselves with despair over presidential candidate Donald Trump's success, US political commentator Patrick J. Buchanan writes, posing the question: "Can the establishment stop Trump?"

Donald Trump's triumphant march across the United States has prompted growing concerns among neocons and some GOP leaders.

"Some among the GOP elites, who have waited patiently through the Obama era to recapture control of US foreign policy, are now beside themselves with despair over Trump's success," US conservative commentator Patrick J. Buchanan notes.

"Fully 116 members of the GOP's national security community, many of them veterans of Bush administrations, have signed an open letter threatening that, if Trump is nominated, they will all desert, and some will defect — to Hillary Clinton!" he points out in his article for The American Conservative.

© AFP 2021 / TIMOTHY A. CLARY
Donald Trump Takes Mississippi Primary
One of the signers, Robert Kagan — a neoconservative intellectual and vocal proponent of America's overseas military campaigns — insisted in his op-ed for The Washington Post that "the only choice will be to vote for Hillary Clinton."

"Are they serious?" Buchanan asks.

What makes them so desperately unhappy about the prospect of Donald Trump's potential victory?

The conservative commentator points out that Trump calls the Iraq War a "historic blunder" and promises to remain neutral while brokering peace between Israel and the Palestinians, as Jimmy Carter did.

And yes, he also says that he would "get along very well" with Russian President Vladimir Putin "as Richard Nixon got along with Leonid Brezhnev and Mao Zedong."

"Trump would launch no new crusades for democracy. He would not oppose Russia bombing ISIS [Daesh]. He would build that wall on the border. He would transfer from US taxpayers to rich allies more of the cost of defending themselves," Buchanan continues.

However, the US political establishment fears that the presidential candidate will throw a monkey wrench in their global expansionist plans (which have nothing to do with America's national interests).

"Now we all know that many of those who are hating on Donald Trump are doing so because he is threatening the cozy-crony-politico-predatory-capitalist system that has made so many of them fat and rich. He is intending to break their rice bowls as the Chinese would put it or, in a more American vernacular, the gravy train might be ending," CIA veteran Philip Giraldi wrote in his recent article for The Unz Review.

On the other hand, Daniel McAdams of the Ron Paul Institute nailed it describing Trump haters as "soft skinned and well-perfumed keyboard warriors who eagerly send America's sons and daughters to be slaughtered in wars that achieve nothing but the ascendance of new 'bad guys' used to justify ever more wars. And all of it pays very nicely for them."

Now he is "under a ceaseless barrage of attack ads on radio, TV, cable and social media."

The question then arises: can the American political and financial establishment stop Trump?

"Answer: It is possible, and we shall know by midnight, March 15. If Trump loses Florida and Ohio, winner-take-all primaries, he would likely fall short of the 1,237 delegates needed for nomination on the first ballot," the conservative commentator stresses.

But it is not about Donald Trump, it's the future of the United States and the world that is at stake.

"Can millionaires and billionaires who back open borders, mass immigration, globalization and the disappearance of nation states into transnational collectives overwhelm with their millions spent in ads the patriotic movements that arose this year to the wonderment of America and the world?" Buchanan asks.