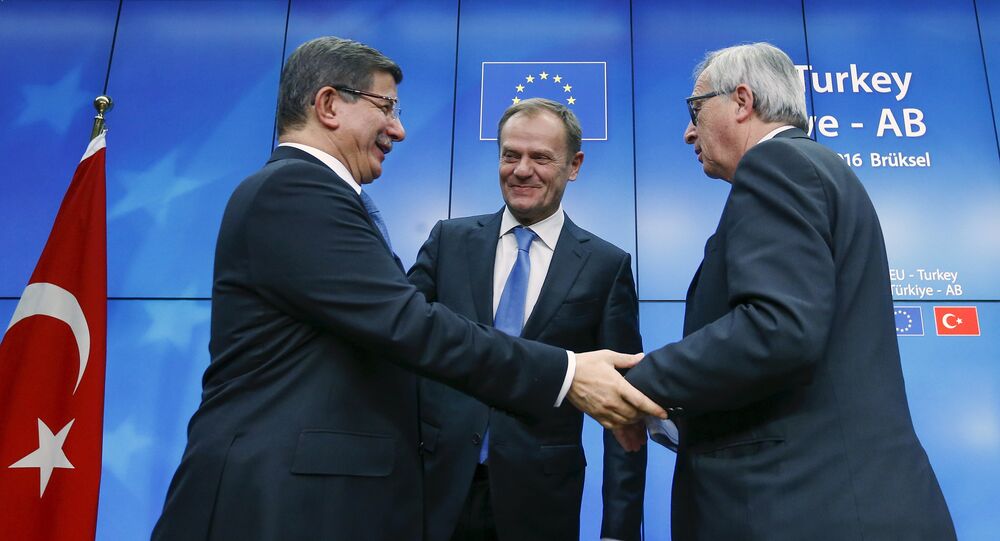 The EU-Turkey summit, held in an amicable atmosphere and resulting in an agreement to put an end to illegal immigration to Europe via Turkey, has been hailed as a major success. Not everyone is thrilled, however; journalist Paul Mason argues that "the sight of Europe's leaders kowtowing to the Turkish president…was sickening."

The leaders of Europe and Turkish Prime Minister Ahmet Davutoglu have agreed on a new migration plan, its six principles set to put an end to the illegal immigration to the European Union from the Middle East via Turkey and the Balkans.

© REUTERS / Yves Herman
Ankara's Trump Card: Turkey Hammers Out Migration Deal With EU in Brussels
Monday's summit was all very cordial, featuring warm smiles, firm handshakes and confiding gestures from European officials toward their Turkish guests. Ankara pledged to take back illegal immigrants arriving on the EU's shores in Greece, and to send legal Syrian refugees to take their place, in exchange for the acceleration of negotiations on visa liberalization, EU accession talks and handing over of the previously agreed upon sum of €3 billion ($3.29 billion US) to help the country deal with refugees. A final agreement based on these principles is expected to be reached during the next summit, to be held later this month.

.@JunckerEU #EUCO "Agreement in principle w/ Turkey on #RefugeeCrisis is a game changer. It is a legally sound deal" pic.twitter.com/M4fFpGg0JZ

​But not everyone was quite so jubilant over the whole affair. Compelled to write an op-ed for Britain's The Guardian newspaper, journalist Paul Mason laid his cards on the table and said that he was "sickened," frankly, by "the sight of Europe's leaders kowtowing" to Erdogan, adding that promises to renew negotiations on Turkey joining the EU may end up creating an existential crisis for the supranational bloc, given the values it claims to represent.

​Turkey, Mason recalled, "is waging war on an ethnic minority, its riot police just stormed the offices of a major newspaper, its secret service faces allegations of arming ISIS, its military shot down a Russian bomber – and yet Turkey wants to join the European Union. The country's swift decision into despotism poses yet another existential problem for the West."

"The sight of Europe's leaders kowtowing to Turkey's president, Recep Tayyip Erdogan, in the hope he would switch off the flood of refugees to Greece, was sickening," the journalist bluntly noted.

"After the Turkish courts authorized police to seize the Zaman newspaper, tear-gassing its employees and sacking the editors, the new bosses immediately placed Erdogan's smiling picture on the front page. He has a lot to smile about."

© REUTERS / Yves Herman
Turkey Holds Brussels Hostage on Refugees to Get EU Help for Imperial Goals
Unfortunately, "Erdogan's mass support in Turkey is real. To the conservative heartlands, where Islam was suppressed for decades by one secular military regime after another, he initially seemed to have achieved an ideal stasis," balancing "the liberal, networked, progressive part of Turkey" with "the reactionary, religious, patriarchal part." "The Kurds would renounce guerilla warfare in favor of parliamentary opposition. Erdogan would lead the country toward EU accession, at a pace slow enough to allow the obvious failings in democracy to be ignored."

"But it has all gone wrong," Mason lamented. "The revolts that swept Turkey's cities in June 2013 were triggered by the inability of Erdogan and his old-man's form of Islam to tolerate the basic microfreedoms that the younger generation want: the right to drink alcohol on campus, the right to uncensored social media, the right to protest peacefully about the same thing European kids protest about."

"Since then, Erdogan has overcome all obstacles. The protest was suppressed by the simple method of firing US-made tear gas canisters into the crowd and laying waste to the urban areas of the Kurdish minority, who had joined the struggle. Then Erdogan got himself made president. And having narrowly lost his parliamentary majority in June 2015, he regained it late last year after a campaign that left the offices of the pro-Kurdish HDP party burned out in several cities."

© REUTERS / Kursat Bayhan
EU Turns Blind Eye to Turkey Media Freedom Restrictions Amid Refugee Crisis
"Simultaneously, the Turkish military provoked an end to a three-year ceasefire with the Kurdish PKK, unleashing the army into the Kurdish towns of southern Turkey on a scale that has left some the mirror image of burned-out Syrian towns just across the border."

However, the journalist warned, "all this is nothing compared to the strength of the hand Erdogan has yet to play. With failed or failing states now in Afghanistan, Yemen, Iraq and Syria, the more Turkish democracy fails, the more the West has to support him. And the more the European Commission, in particular, hangs on to the conceit that Turkey will one day join the EU, the more it strengthens forces in Europe who want to leave the union altogether."

"Transcripts leaked to a Greek website last month appeared to show Erdogan overtly threatening Europe with an uncontrolled flood of refugees unless he was given money and rapid accession to the EU."

And while Mason oddly suggested that the transcripts may have been produced by "Erdogan's newest enemy, the Russian secret service," the basic truths that they reveal, he noted, are undeniable: "Real or fabricated, the tragedy is that they cannot be far from the truth: Europe is already turning a blind eye to the erosion of democracy, to collusion with people traffickers, and to military action against civilians."

Subsequently, the journalist noted, those in Europe who truly care about ideals including democracy and human rights must be willing to put European officials and national governments' feet to the fire.

"What happens next must be done calmly and proportionately. The citizens of the EU have a right, first of all, to demand honesty from their own governments, and the [European Commission] itself. The EC's 'progress report' in November was an exercise in hypocrisy: while noting the slide to despotism, censorship and brutality, the report praised Turkey for its economic progress. Imagine what the same rapporteurs might have made of an accession request by Mussolini's Italy."

© REUTERS / Gleb Garanich
Turkish Prime Minister Urges More NATO Support
Moreover, the journalist emphasized, this conflict is not about Turkey's ethnic or religious makeup, but about whether "a state so fundamentally in breach of the Copenhagen criteria for EU membership remain in any kind of accession process."

"The answer must clearly be no – and once Erdogan is told so, the EU has a duty to offer a programme of support to the secular democratic forces that need to come to power in order for accession talks to be resumed…That would leave Erdogan in strategic trouble. But it would not immediately solve the situation in the Aegean. It would require Europe to double-down on its strategic commitment to Greece, with border forces, debt relief, aid and solidarity."

Ultimately, Mason notes, "to those in Europe wishing to demonstrate to a wavering Britain why we need the EU, there could not be a better opportunity." Unfortunately, such a prospect "will be viewed with dismay by the centrist political class that helped create this mess. It will bring them face to face with a choice they do not want to make: democratic values over market logic; moral decisiveness over the illusion that everything will be all right."