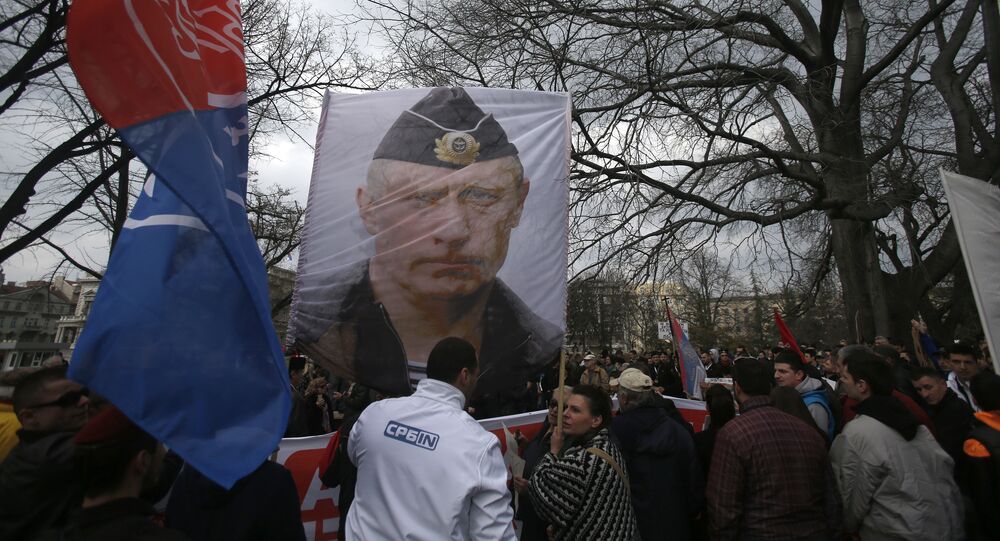 The Serbian society is on the "brink of losing patience," because of the activities aimed toward country's membership in the North Atlantic Treaty Organization, the Serbian Dveri Movement said in a statement on Friday.

MOSCOW (Sputnik) — On February 19, Serbian President Tomislav Nikolic signed a confirmation of the country’s cooperation plan with NATO. Serbian lawmakers ratified a diplomatic immunity agreement and logistical support for NATO representatives on February 12. The latest Belgrade's moves became the discussion topic within Serbia and caused a series of protests across the country, as well as calls for a referendum on the alleged accession of Serbia to the alliance.

"The Serbian public is on the brink of losing patience because of the policy of drawing Serbia into NATO's sphere of influence by force and of creeping entering into the pact, which is implemented by the [Serbian] regime," the statement obtained by Sputnik read.

© AP Photo / Darko Vojinovic
New Anti-NATO, EU Coalition Formed in Serbia Ahead of Elections
The statement added that Dveri did not believe both Prime Minister Aleksandar Vucic and Nikolic, because they were "far from any neutrality", including the military one.

According to the statement, Belgrade should hold a referendum on NATO membership on the ground of the fact that around 80 percent of the Serbs oppose the membership in the alliance.

The statement also added that Dveri urged to change the most significant Serbia's security documents and to include cooperation with Moscow and Russian-led Collective Security Treaty Organization (CSTO) in them.

"The planned documents should be changed in order to update them in accordance with the changes in the international relations and the situation in the region with a clear focus on the limitation of NATO's influence [in the region] and support of the cooperation with CSTO," the statement said.

Belgrade is part of the NATO's Partnership for Peace program alongside other former Yugoslav republics. Its Individual Partnership Action Plan entered into force in January 2015.