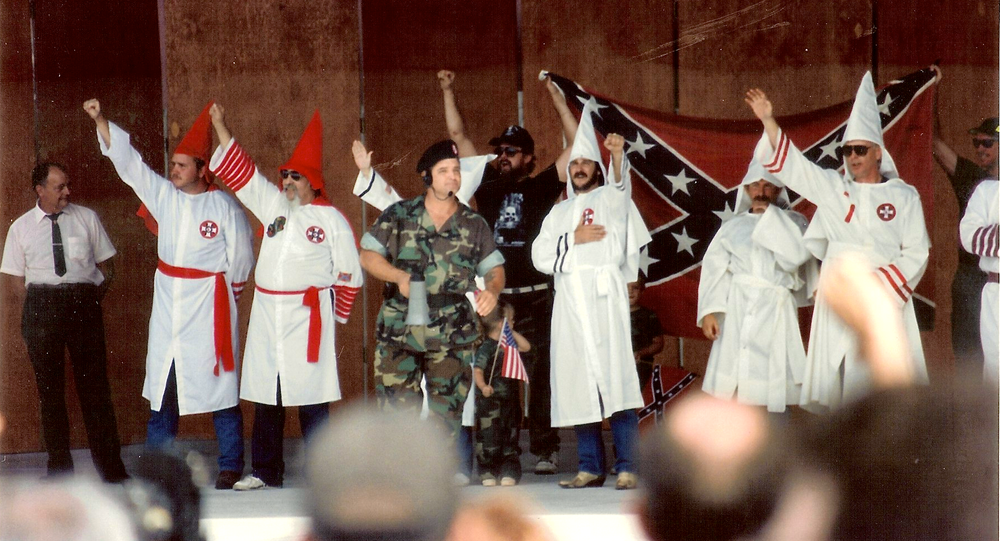 Donald Trump, the free-talking media flavour of the season that political pundits had written off as comic relief in an otherwise boring election cycle, has emerged from Super Tuesday as the presumptive nominee for the Republican Party and, many fear, as the leading voice of white supremacy in America.

Last week, Trump again drew widespread free media attention after refusing to categorically denounce an endorsement he received from David Duke, a notorious former leader of the white supremacist group Ku Klux Klan and several other like-minded organizations. On Tuesday, CNN panelist Van Jones described the policies of Donald Trump as "playing funny with the Klan," accusing the candidate of pushing buttons that inspire and embolden the voice of bigotry in America.

Former Salt Lake City Mayor Rocky Anderson confirmed to Sputnik’s Loud & Clear that Trump is playing on the basest of emotions to advance what is rapidly becoming a clear fascist agenda. He observed that Trump "makes fun of disabled people, calls for the exclusion of Muslims from this country, talks about having protesters beaten up, speaks about violence with such glee, and about how we’re going to be the greatest country again."

Anderson went on to offer, "imagine what he would do as President to people protesting against his policies in the streets."

In fact, the Southern Poverty Law Center notes that there is a rampant increase in nationwide white supremacist and fascist organizing, mobilizing around what some have termed their "glorious leader" Donald Trump. Anderson believes these organizations "feel emboldened when they see a guy saying the things that Trump says and see that he is the leading Republican candidate.” Anderson foresees “very dangerous times for America" and calls on people to be "very vigilant" against the "dark forces of fascism and racism that are growing in this country."

Has the discourse changed from a covert racism to overt white supremacy?

Becker said that he sees the Trump candidacy as a shift in the American political narrative, from covert discrimination to a more overt racism. “In the 1980s Ronald Reagan made a fuss about ‘Welfare Queens’ and we all understood this was targeted at black women who had several kids,” he said, noting that conservative racism is not new but has in the past been sanitized.

© AFP 2020 / Michael B. Thomas
'President Trump': From Impossible to Improbable to All But Inevitable?

Becker summarized Trump’s platform by observing that the scion of wealthy parents is not, as he has claimed, a conservative at all, especially on trade, women’s health, and religion, and still garners mass approval. Becker observed that “he is openly embracing white supremacy, which we see, because none of his positions are conservative, but he is making the argument that we white people have lost our country to Latinos to Muslims to China, and that we need to take it back in order to ‘Make America Great Again.’”

Has the mainstream media cultivated Trump’s fascism for the sake of chaos journalism?

Socialist candidate for the US presidency Gloria La Riva says she finds the Trump narrative troubling, suggesting that hate organizations will see his candidacy as a recruiting tool, and that they are "taking to social media knowing that they will now be able to garner support for their cause." La Riva blames the US mainstream media primarily for freely elevating Trump’s bigoted rhetoric. “The media is lapping up every single one of Donald Trump’s requests, whether it is the wall or the expulsion of all undocumented workers or his call for the Muslims to be expelled,” she said.

La Riva views CNN’s coverage of Trump’s Muslim exclusionary vow as perhaps the most reprehensible. “We saw that 75% of Republican voters supported the exclusion of Muslims in the last primary’s exit poll and it was only because CNN and other media kept touting that policy position over and over again.” She said, “if the media didn’t give him coverage about that or other absurd policy positions, it wouldn’t have picked up.”

Becker discussed the pervasive influence of the media in political coverage, commenting that, during a 6:00 PM news program recently, "Trump was going on one of his rants and CNN kept it live for 45 minutes and he didn’t have to pay for that media time." Quoting CBS chief executive Les Moonves, that "Trump is damn good for business, he’s driving our ratings up," Becker explained that the cynically calculating profit-motive made by media executives is a complete abandonment of their duty to inform the public.

Is the media failing to inform the public by suppressing Bernie Sanders’ viability?

Anderson agrees that the mainstream media’s perverse interference in the Republican Primary has elevated Trump and his fascist agenda. But, he suggests, the missing story is how profoundly that profitable distraction has impacted the Democratic race.

"We just saw the opposite thing with Bernie Sanders, where the mainstream media did nothing to get out the fact that Bernie Sanders was running, what his platform was, what his history has been, or his total authenticity as a candidate and a human being," he lamented.

La Riva agrees, saying that media elites are attempting to "spin Bernie Sanders off the stage" because he is addressing real problems. By contrast, she argued, "the media hides Hillary Clinton’s history and touted her as somebody who is liked by the black community and has done things for the black community, ahead of Super Tuesday."

In reality, La Riva notes, "in 1996 she was on the record saying that black children were ‘superpredators’ who needed to be healed, while advocating for the crime omnibus bill that sent hundreds of thousands of young black men to prison."

Anderson suggested, and Becker and La Riva agreed, that “we have to do everything that we can now to make sure that Trump is not the President of the United States.”

"He is like Goebbels," stated Anderson, referring to the monstrous Nazi official. "Goebbels has written the plan, we can all read it, and now Donald Trump is executing it and it’s a real problem."