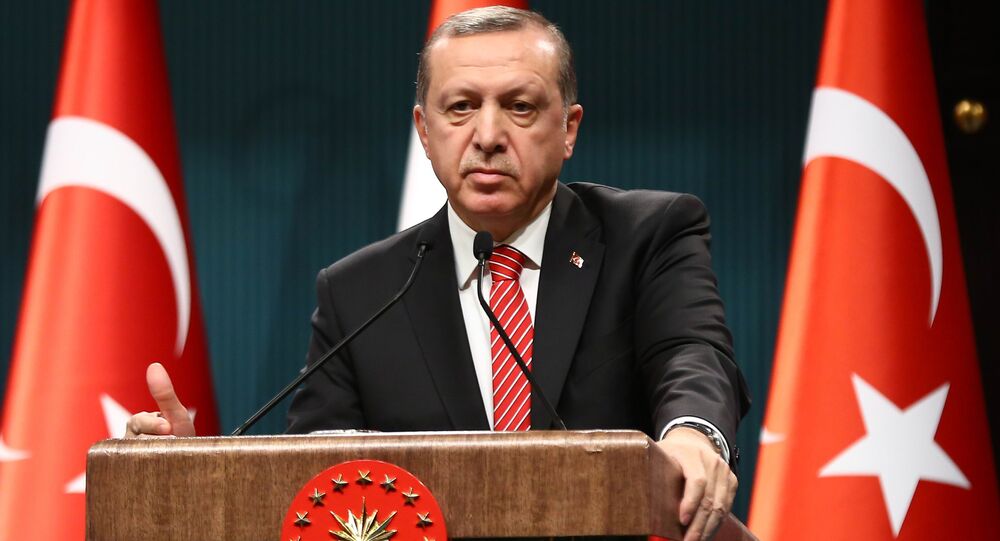 The Turkish president's disregard for the rules of diplomacy often gets Recep Tayyip Erdogan into trouble as evidenced by his remarks following the downing of a Russian bomber, Turkey's BirGün newspaper asserted.

"Erdogan has openly changed long established trends and generally accepted standards in diplomacy. As a result, he does not notice the insensitivity issue. But this is why voters love him. They are the only ones he cares about. At the same time Erdogan always puts his foot in his mouth," the independent left daily observed.

© AFP 2021 / LOUISA GOULIAMAKI
Turkey Will Not Be Happy With This Greek Offer to Russia
The media outlet offered Erdogan's stance on the Su-24 downing to support the point. By saying that Russia lost Turkey because of the two pilots, Erdogan unintentionally highlighted how important those pilots were for Moscow as well as the extent to which he does not value his own people.

The Turkish president, according to BirGün, appears to have genuinely hoped that for Russia friendship with Ankara would be more vital than human life.

© REUTERS / Reuters TV/Haberturk
A combination picture taken from video shows a war plane crashing in flames in a mountainous area in northern Syria after it was shot down by Turkish fighter jets near the Turkish-Syrian border November 24, 2015
© Sputnik / Alexander Vilf
Cold Turkey: Poll Shows Russians Are Reluctant to See Anti-Turkish Sanctions Scrapped
A Turkish fighter jet shot down the Russian Su-24 bomber over the Syrian territory, citing airspace violations. Russian defense officials and the other pilot dismissed the allegations as unfounded. The bomber, which was on an anti-Daesh mission in northern Latakia, did not receive any warnings before the incident.

One pilot was fatally shot from the ground by Turkmen militants while descending by parachute. The Turkmen are a Turkic ethnic group living in Syria, Iraq and Iran, which are backed by Ankara.