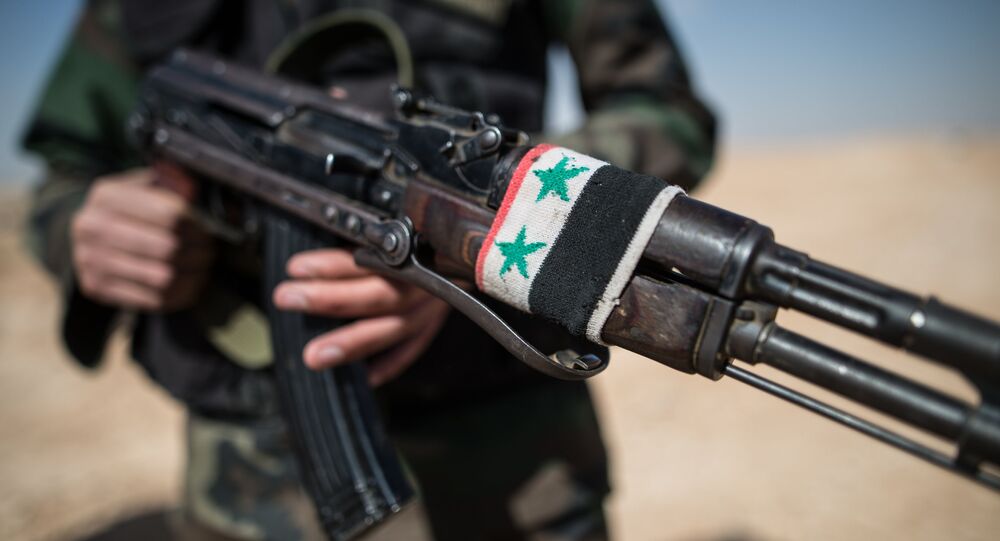 The war is far from over in Syria, however, Russia's professional diplomatic moves have left Washington nearly no room to maneuver: the US cannot simply return to pre-2016 rhetoric and policies (at least not overtly) and push ahead with their "Assad must go" agenda, The Saker told Sputnik.

In an exclusive interview with Sputnik, The Saker, a pseudonym for the US-based top level European military analyst, shared his views on the prospect of the Syrian ceasefire agreement, US Secretary of State John Kerry's intriguing Plan B and the possibility of a regime change in Turkey.

In his recent article for The Unz Review The Saker underscored that the Syrian ceasefire deal is a huge victory for the Russian diplomacy.

On the Horns of a Dilemma: 'Good Terrorists' or 'Moderate Head-Choppers'?

© AP Photo / Militant Website, File
Daesh Terrorists: A Multifunction Tool in Hands of Ankara, Riyadh, NATO
Meanwhile, experts express their concerns regarding the fact that there are scores of groups on the ground in Syria whose affiliations and sponsorship are murky. There is a lot of controversy over which of them are terrorists and which are so-called "moderate rebels."

Could anti-Assad forces on the ground and their Western backers use this vagueness to their advantage and thus set a trap for Russia and Damascus? What should Russia and Bashar al-Assad do to avoid such a trap?

"They already avoided it," The Saker underscored.

"The way this latest agreement was framed is simple: all those who decide to participate in it are henceforth "good moderates". All others are "bad terrorists". Which, in practice, will translate into this: those who cease fighting are integrated into the political progress; all others are designated for annihilation. That's it. Instead of getting caught into endless discussions about "good terrorists" and "moderate head-choppers" Russia forced the USA into a binary setup: all opposed to this process are to be wiped-off. Simple and very, very effective. There is no vagueness left," the military analyst explained.

What are the potential prospects of the Syrian ceasefire? Will it prove efficient, like the 2013 US-Russian deal over Syria's chemical weapons, or will we face a Donbass-style stalemate?

"Neither.  It won't be a solid deal like the US-Russian deal on Syrian chemical weapons, but it will not be a Donbass-style stalemate either simply because the agreement and the UNSC Resolution specifically call for the complete elimination/destruction of the various terrorist organizations in Syria," The Saker elaborated.

"So what I see are two options: either Turkey and the Saudis reignite this all and create total chaos or the Takfiris will have to move back to Iraq and Libya. Since both processes can take a lot of time, this war is far from over," the military analyst emphasized.

© Sputnik / Dmitriy Vinogradov
Out to Win: Why Syria Ceasefire Deal is a Huge Victory for Russia
Indeed, tensions are still simmering over the possibility of the Turkish-Saudi invasion,  regardless of the fact that a number of NATO members have made it clear that they will not support Turkey in the event of Ankara's unilateral invasion of Syria. Furthermore, some experts assume that the West is harboring a regime change in Turkey, after becoming sick and tired of Recep Tayyip Erdogan's erratic policies.

US independent journalist Mike Whitney even drew parallels between Recep Erdogan and Saddam Hussein, suggesting that Washington is planning to replace the Turkish leader by setting a trap for him. Therefore, the journalist argues in his article for Counterpunch.org, the Obama administration is currently indulging Ankara's warmongering. Does this speculation have any grounds?

"I sure hope so!  The best thing which could happen to the entire region and, first and foremost, Turkey, is if Erdogan gets overthrown and sent to jail.  Turkey is a very important country and it should be ruled by a civilized and mentally sane leader and not a dangerous lunatic like Erdogan.  Right now Turkey is bad for the EU, bad for Russia, bad for Syria, bad for USA (they threatened to deny the use of the Incirlik air base), bad for Egypt and, really, bad for everybody besides, maybe, Israel and the Saudis (and in the case of Israel, I would not be so sure either).  Turkey is the quintessential "rogue state" which needs to be stopped and turned into a responsible international actor," The Saker told Sputnik.

Western powers are openly discussing the possibility of partitioning Syria and have no scruples about encouraging Ankara "to defend itself" from an alleged threat from Syrian Kurds, located in northern parts of Syria. How can Syria avoid its disintegration?

The country can avoid dissolution "by insisting on the respect of all relevant Security Council Resolutions which have specifically called for a unitary secular Syria," The Saker answered.

"It is possible that Turkey will try to make a "Cyprus v2" happen and occupy a part of Syria, but neither the Syrian government nor Russia or Iran will let Turkey do that.  If the Turks go ahead with this folly, Kurdistan will explode and the Turks will get full Russian and Iranian backlash," the military analyst suggested.

'US Neocons are Furious About the Russian Victory'

© Sputnik / Iliya Pitalev
On the Brink of Collapse: Is Daesh About to Breathe Its Last?
But is it possible that the US hawks and their CIA-trained proxies on the ground would try to throw a monkey wrench into the Syrian peace process?

"For one thing, there are clear signs of infighting inside the various US agencies, Pentagon, CIA, DoS, etc.  It is also clear that the Neocons are furious about the Russian victory.  Furthermore, both the Israel lobby and the Saudi lobby will put all their resources together to pressure the White House into a more confrontational stance," the military analyst told Sputnik.

"We have already heard of the so-called "Plan B" and even discussions about a possible partition of Syria," he noted, referring to US Secretary of State John Kerry's latest initiative.

On February 24 John Kerry hinted at the possibility that Washington may take a more aggressive stance on Syria, including the partition of the country, if the ceasefire and political transition fails.

"If the Russians and Iranians aren't serious about having this [Syrian peace process] work, then we got to go to a Plan B, which may be more confrontational and may wind up carving things out," Kerry told the Senate Appropriations Committee.

According to The Saker, the easiest way to sabotage the deal is to allow Turkey and Saudi Arabia to intervene. The military analyst emphasized that he does not believe for one second that Western warhawks will accept the current situation.

"This in no way makes the Russian victory lesser because the US has already committed, through a UN Security Council (UNSC), to a unitary and secular Syria. Likewise, the US has already committed not only not to support terrorists groups, but also to fight against those who, like Turkey, make money from this war and finance Daesh [ISIS/ISIL]," the military analyst told Sputnik.

"This will not prevent the US from, yet again, reneging on these commitments, but it will make it much harder for the US to justify doing so," he pointed out.

"Simply put, the US cannot simply return to pre-2016 rhetoric and policies, at least not overtly, and that is, indeed, a huge victory. But the war is far from over," The Saker stressed.

'At Least for Now Cool Heads Have Prevailed in the West'

© Sputnik / Michael Alaeddin
Keep Calm: Syrian Conflict is by No Means a Prelude to WW3
Since Turkey is a NATO member state, Ankara's potential conflict with Russia or Iran in Syria could lead to undesirable consequences, to be more precise — to a direct conflict between the NATO bloc and other geopolitical players. Can the conflict in Syria evolve into a greater war between Russia and NATO?

"Potentially, most definitely.  But there are signs that the USA and NATO don't like the way Erdogan is trying to use them and force their hand into a highly dangerous confrontation," The Saker stressed.

"At least until now, cool heads have prevailed both in Europe and the US and Erdogan was apparently told that "we are not going to cover your crazy policies".  I hope that this will continue.  For all the disgust Russia feels for the West, the Kremlin will immediately work constructively with any Western leader willing to be pragmatic and minimally fair.  If the West wants to finally sit down and pragmatically begin to find solutions to each major international problem one by one, then Russia will do her part and help," he elaborated.

"But the language of confrontation and threats must stop," the US military analyst warned.